Welcome back to “On the hill with …”, this time the interviewee is Lyn Noble, a long time member of the club who besides being an all round outdoor person is also an accomplished watercolourist and mean banjo player!  Over to you Lyn … 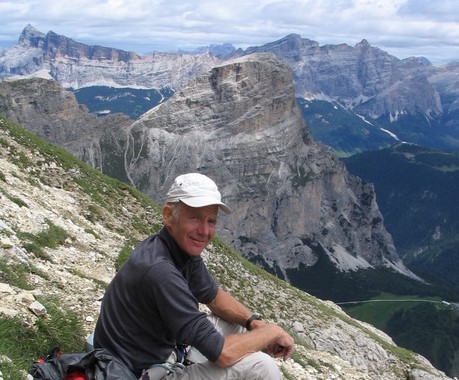 Back in the middle of the last century (!) a young Unitarian minister, Keith Treacher, who many will remember, planned an expedition to Arctic Norway. Through his contacts in Unitarian chapels he recruited a handful of  “likely lads” (V1 form and Uni) and started a training programme. Enter me.

I’d never done anything other than the odd walk over Ilkley Moor with parents so real hills were an eye opener.

It started with a trip to Windgather and I remember struggling to tie a bowline on the train to Sheffield. After that it was Reade’s Route on Crib Goch  and Angel Pavement on Craig Y Bera. Treacher climbs had to be on mountains. I was hooked. 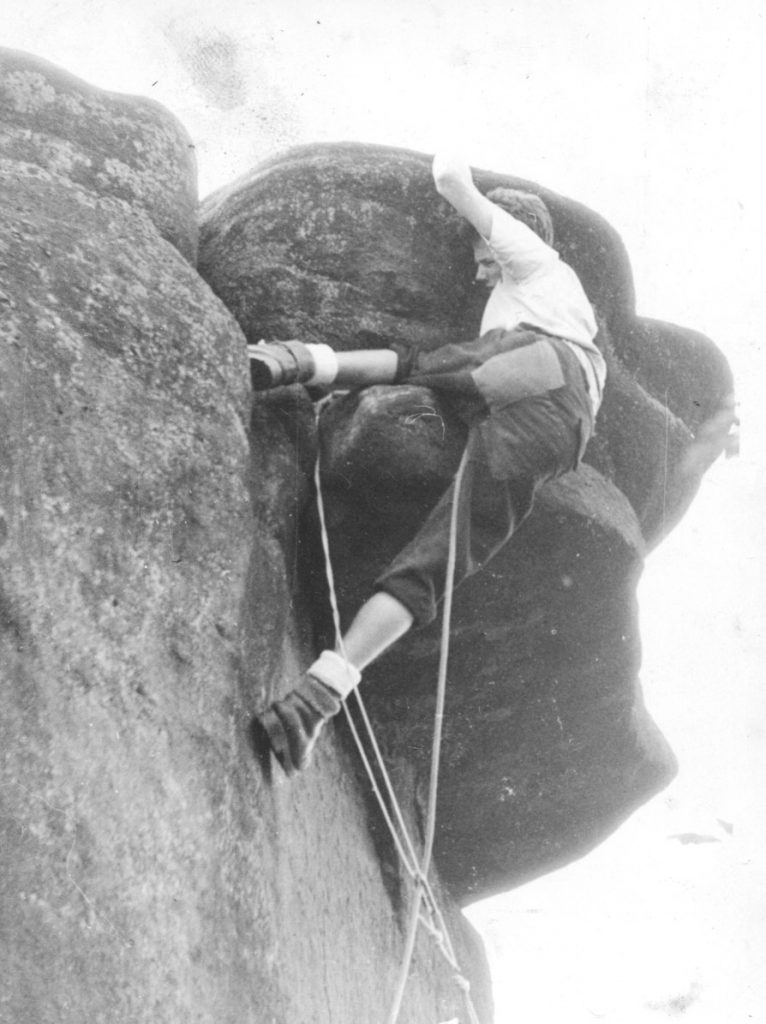 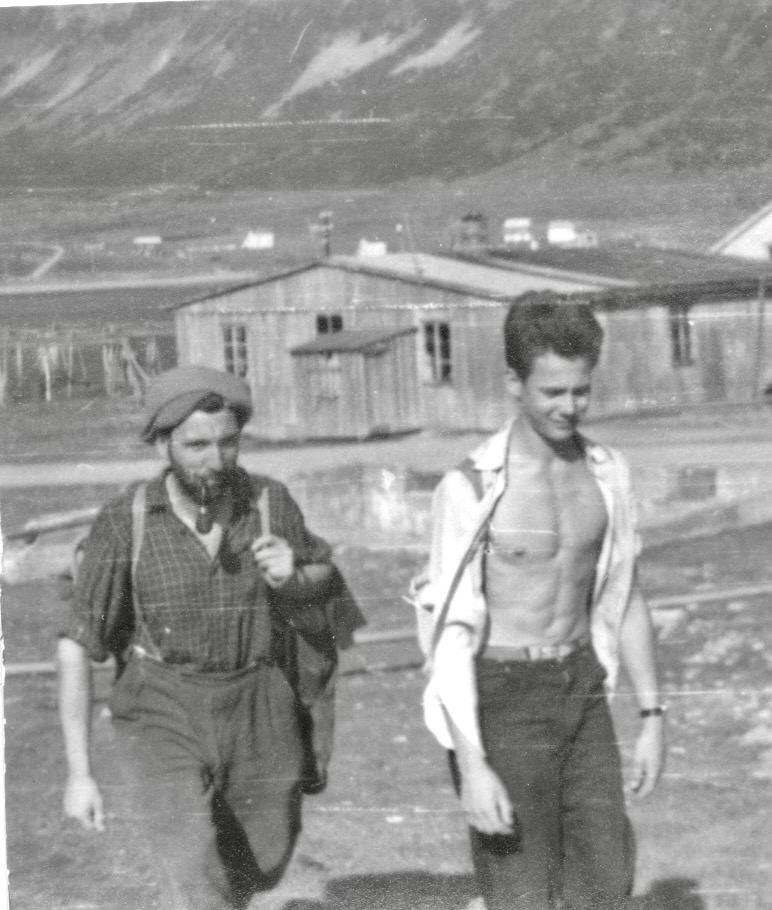 Undoubtedly, Keith. It wasn’t just climbing it was total immersion in a different culture, different people with different visions, remote camps, huts and, trying to pick up the threads fireside talk of epic deeds, learning a new language.

The 1957 Norway trip was real adventure. Classic expedition stuff getting lads, gear and food to a small, hardly explored, island off the Lyngen Peninsula. Maps were made and unclimbed peaks ascended but the greatest impression was left by Keith’s total faith in his “lads”. We would leave base camp for a day or two at a time: groups of two or three with a slightly more experienced “lad” in each.

How Keith managed to survive all this without showing any sign of anxiety I will never know. These days you would be locked up!

A year or two later I was introduced to the Alps by Keith and Richard Harris. This resulted in a long love affair with the Dauphiné.

College years at Loughborough resulted in more climbing partners with very different outlooks and aspirations. First on the scene in the early 60s was Colin Mortlock with an early ascent of the Cassin Route in Piz Badile. We tried to do the whole thing in one day, leaving the Sciora Hut in the early hours, finishing the route in good time then running out of steam on the way back to the Bondo Glacier necessitating a quick descent to the Gianetti Hut. 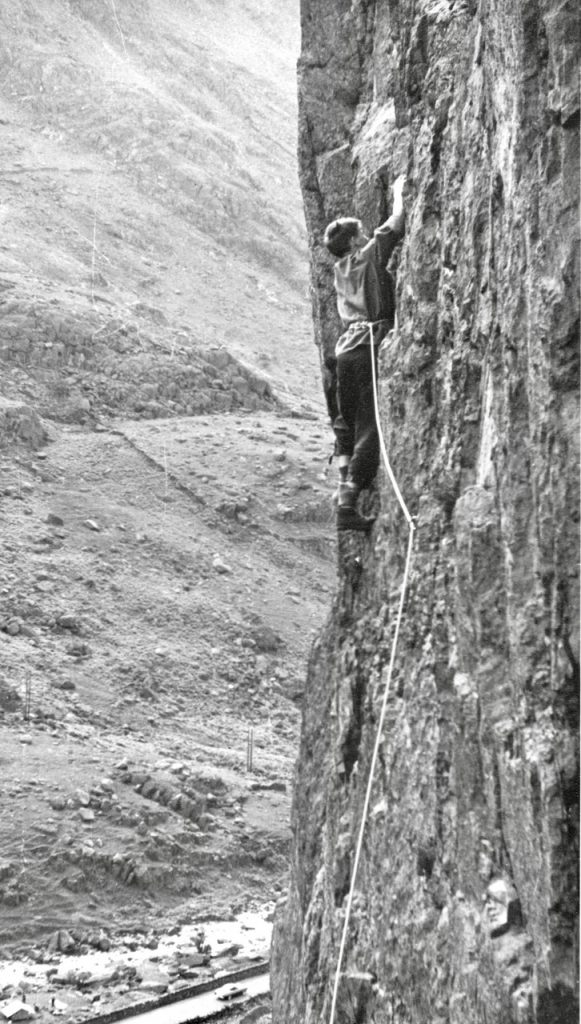 Back home we climbed together on some of the hard routes of the day like Extol on Dove Crag, Daurigol and Bloody Slab on “Cloggy” and most enjoyably new routing during Colin’s 1970s campaign in Pembroke.

Another alpine partnership started in Loughborough with John Brailsford and resulted in an early British ascent of the North Face of the Drus. We had a freezing bivvy on the quartz ledge below the summit only to discover the following morning that a short crawl through a tunnel led to a sunny platform on the other side of the mountain!

Predictably, through Keith Treacher. I’d had a loose relationship with the club for about ten years before joining in 1972.

The right company, a suitable challenge, delight, feeling at one with nature and a happy outcome!

In the 60s and 70s the climbing mags were printing amazing pictures of soaring granite in Yosemite. We had to go. That meant June, me and the kids. Before we arrived, my would-be climbing partner succeeded in getting himself kicked out of the Valley for speeding so having met up with Jim Worthington, another lone climber (from New Mills!) we were promptly identified as “sandbag bait” by the locals. “Ranger Rock’s the place to go (they called it Manure Pile Buttress) but watch out for a nest of rattle snakes on the way down.” The route was fine, didn’t take long but the descent took ages… tiptoeing down, examining every step. Back at camp, grinning faces, sandbagged!

“Speedy” Smith then turned up with his wife and a young climber who remembered meeting me at White Hall Outdoor Centre. “How about four of us on Half Dome, the Robins route?” “Great!” And it was. Speedy sped  up in the day. We bivvied on the Sandy Ledges and crept across the Thank God Ledge. I still cringe when I see Alex Honnold standing there facing outwards with 1000’ of nothing below him. 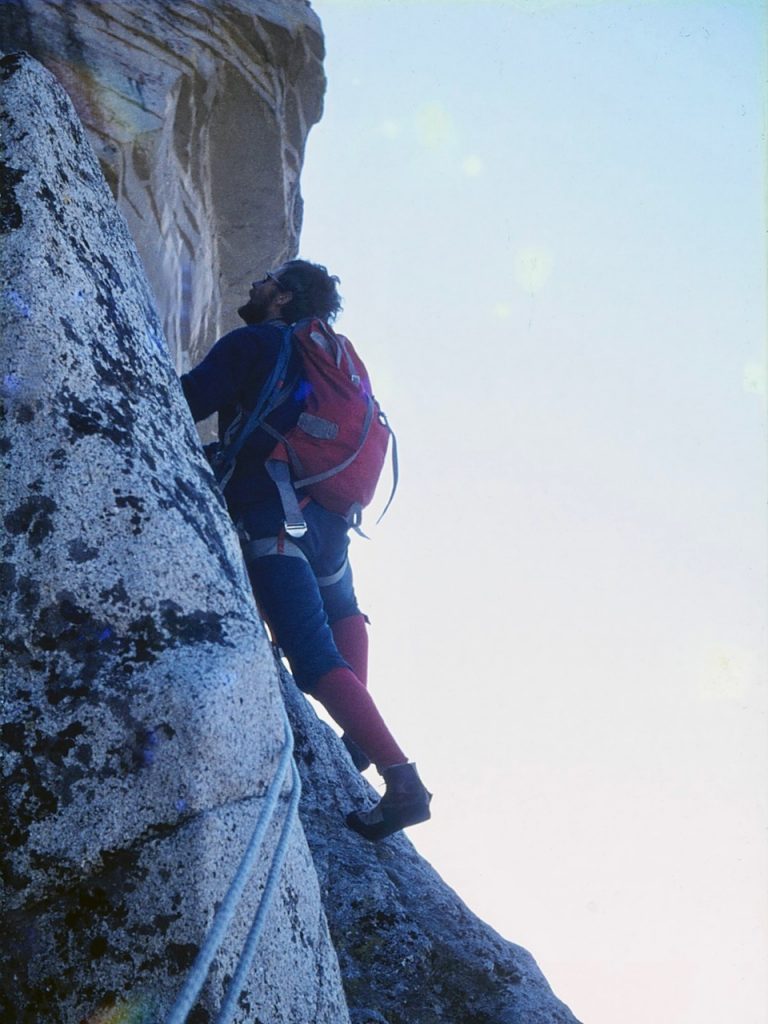 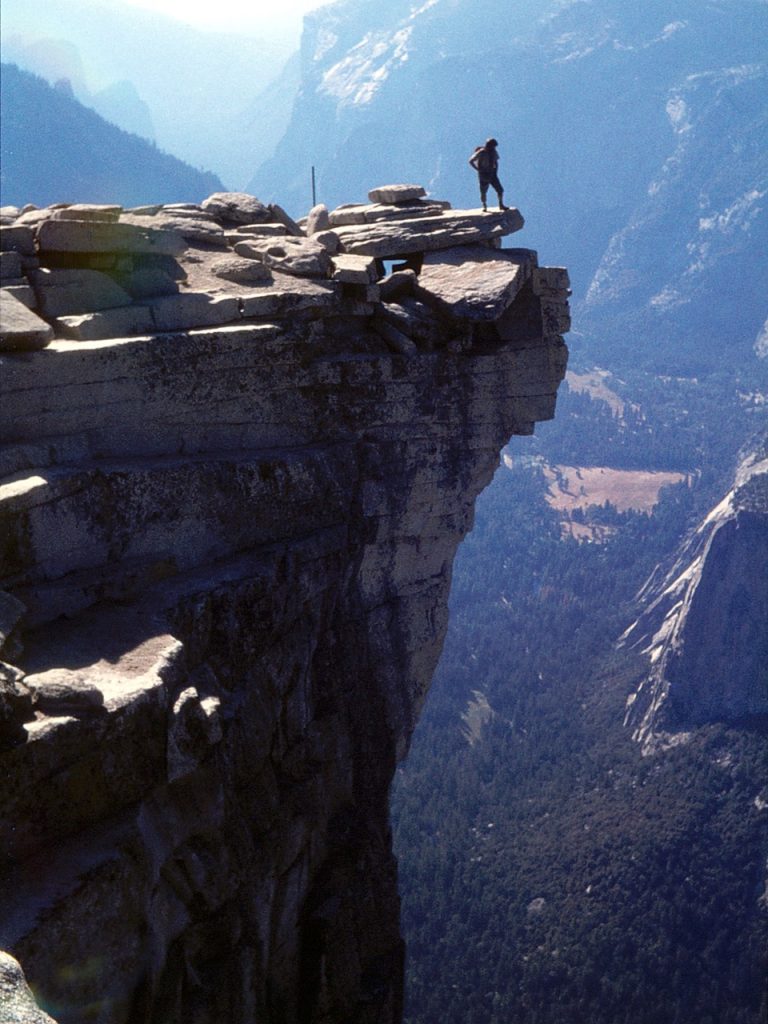 1984 Randa… With my son, Anthony, aged 16 we had been riveted by the view of the Weisshorn from the Nadelgrat and the Dom.

Back in the valley things looked a bit “iffy” but worth a trip to the Weisshorn Hut. It drizzled a bit and the guardian clearly expected us to be back within half an hour. The cloud cleared, snow was perfect, views magnificent, no-one else on the hill and we were back by early afternoon. Anthony phoned the other day and reminded me that the overnight “drizzle” was a violent storm and he thought the hut might blow away! 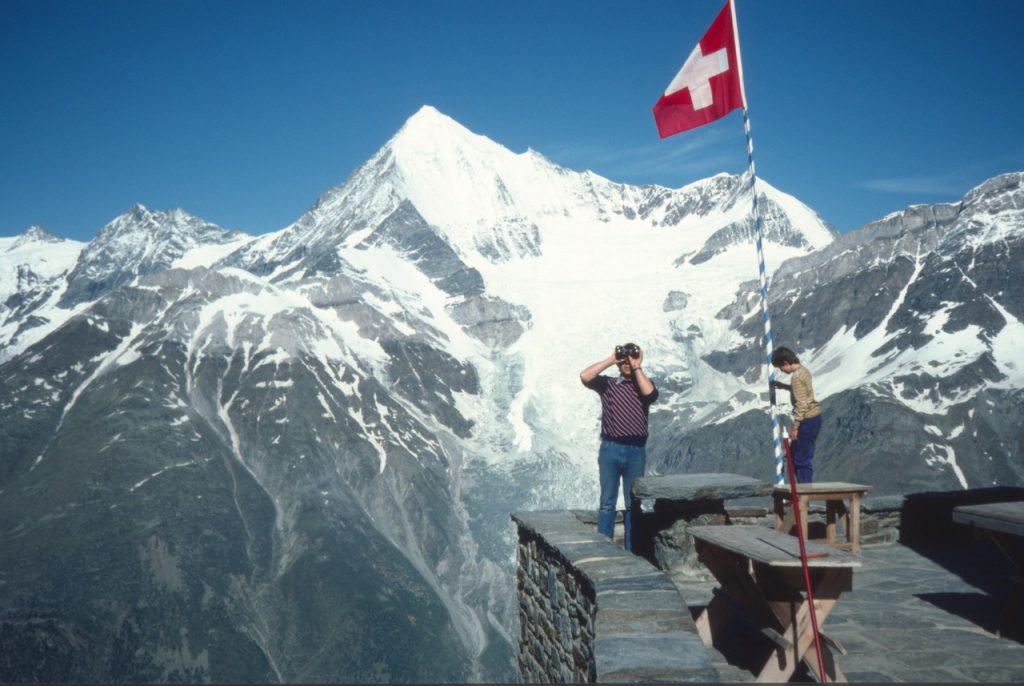 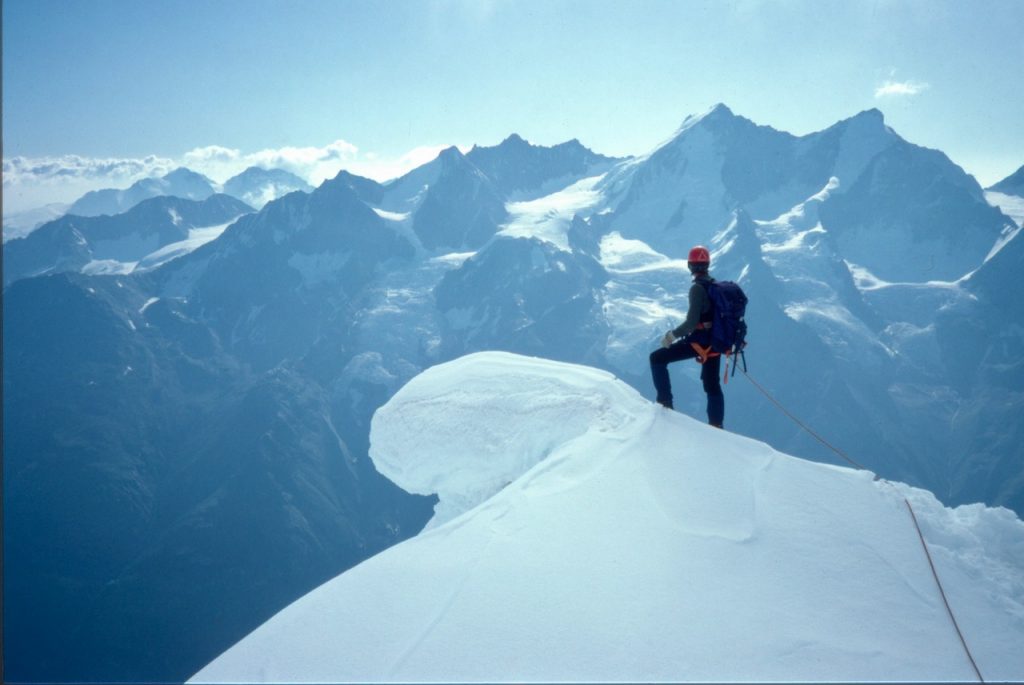 Anthony Noble on the Weisshorn 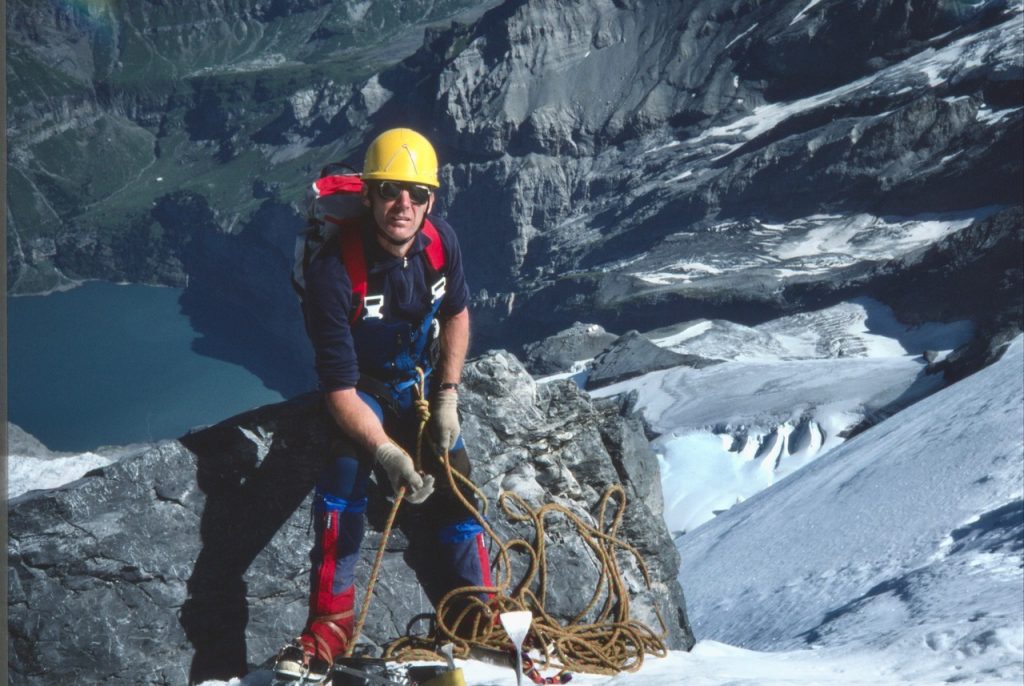 Lyn on the North Face of the Doldenhorn

There are so many, but this was really special… Dave Pownall and I were on an Alpine Club meet to the Karakoram. The aim was to trek up the Chogo Lungma and Haramosh glaciers then over the Haramosh La “looking at” any do-able peaks en route. As we climbed up to a tempting camp spot above the glacier junction we heard gunfire. Then a giant Balti hunter appeared, ex WD Lea Enfield at the ready. We were grilled… where were we from and going to? Where are your porters?  (we had one, toiling up behind). “You’re porters not welcome in my valley!” That meant where we were going. I tried to defuse things by asking about surrounding peaks. When he mentioned Malubiting I remembered the Manchester Karakorum Expedition of 1968 and dropped a name or two. He became a new man, “Malubiting! Manchester! John Allen! My friend! You are my friends!” And best of all “Your porters are welcome in my valley”. One Rucksacker can save the day. 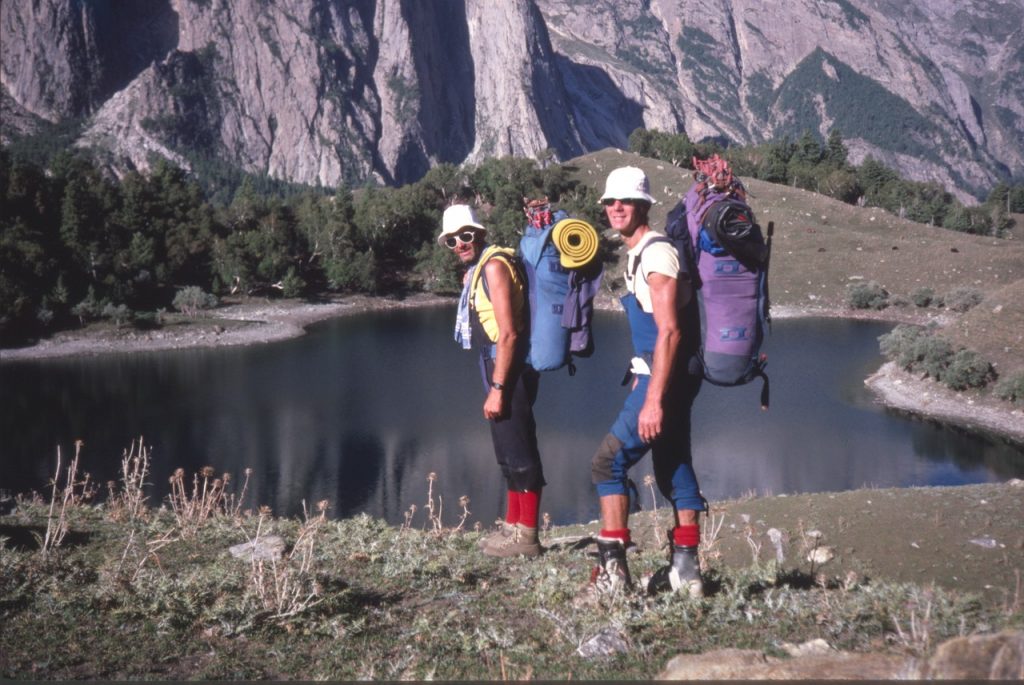 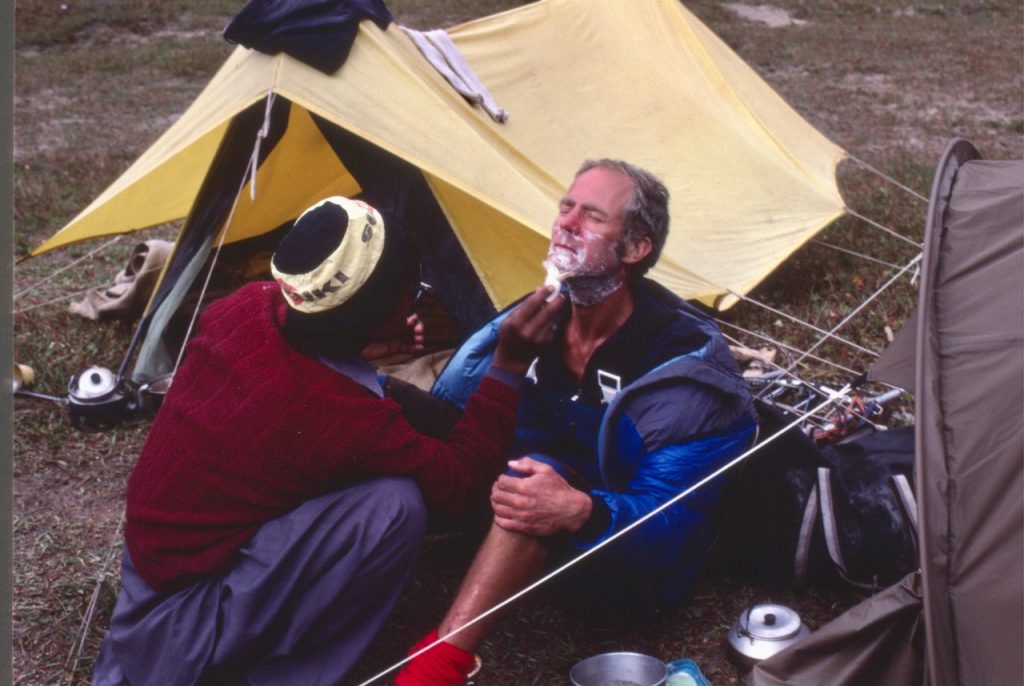 At the other end of the scale I remember descending into Wadi Rhum after a short but nail-biting solo trip through Rakabat Canyon. On the edge of the desert I was generously invited into a Bedouin tent for tea. What could I offer in return? There were two little boys (and mother hiding behind a curtain) so I fished out two Jordan’s Crunchy Bars. The lads took one sniff and fed them to the goats!

It’s always the people you remember.

And, of course, my wife June who put up with me and taught me how to look at new things and got me hooked on photographing alpine flowers.

Back in the 60s I was teaching in Manchester and sharing a farm cottage with Pete Hutchinson who later founded Mountain Equipment.

One evening, after school, we piled into his Morris van and drove up to Malham. Our “daft idea” was to climb Malham Main Overhang by head torch, an A3 aid climb in those days. I led up to a small stance below the overhang. Pete climbed through, very carefully, testing everything. It must be over 100’ to the foot of the cove; too long to lower off. Time went by until I woke myself shouting at “someone swinging on the hanging bite of slack rope”. I never told Pete I’d been dreaming!

I’ve always enjoyed occasional solo climbs. It started on a trip to Skye in 1959 with Keith Treacher… up the Cioch by the right hand crack then on the way home he dropped me off at Kings House to do the Aonach Eagach ridge, picking me up at the Clachaig. I used a pacamac plastic raincoat in those days! 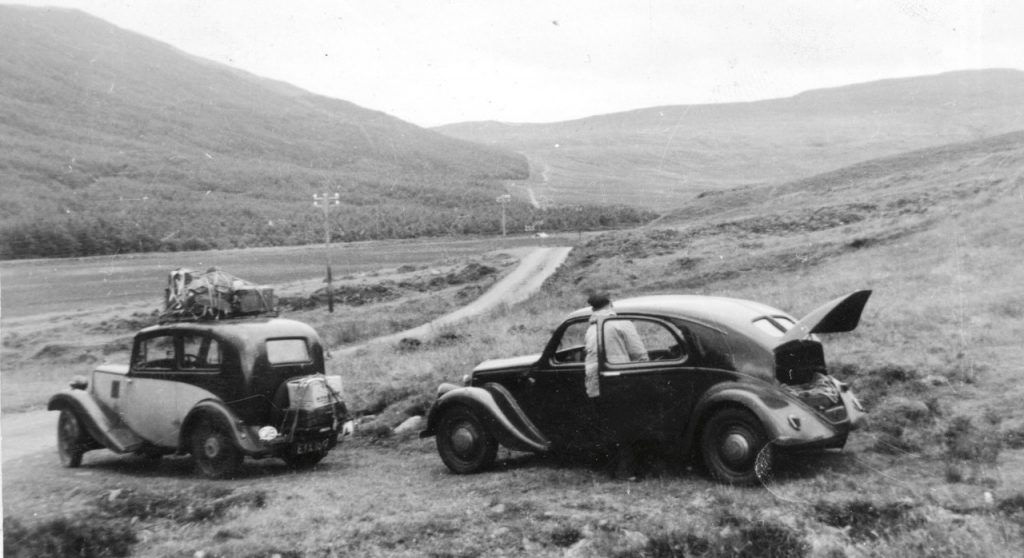 Four years later we were camping near the Brenta Hut in the Dolomites. We’d done a few difficult routes but my eye kept coming back to the north ridge of the Crozzon di Brenta, a 3300ft grade 4 route with a long and complicated traverse to reach the descent path. It looked broken into “digestible” steps and should be reasonable to descend if things got a bit much. No guide book, just use your nose and take all the easiest options (like the first ascenionists must have done). The route flowed by, effortlessly and exhilarating; the summit traverse, exposed but safe. Then back via the Bocha di Brenta to be greeted with “That didn’t take long!”

I’ve often asked myself “why solo?”.  It must be the total absorbtion, absence of other’s suggestions but perhaps above all the possibility of flowing, uninterrupted movement through the terrain we love. 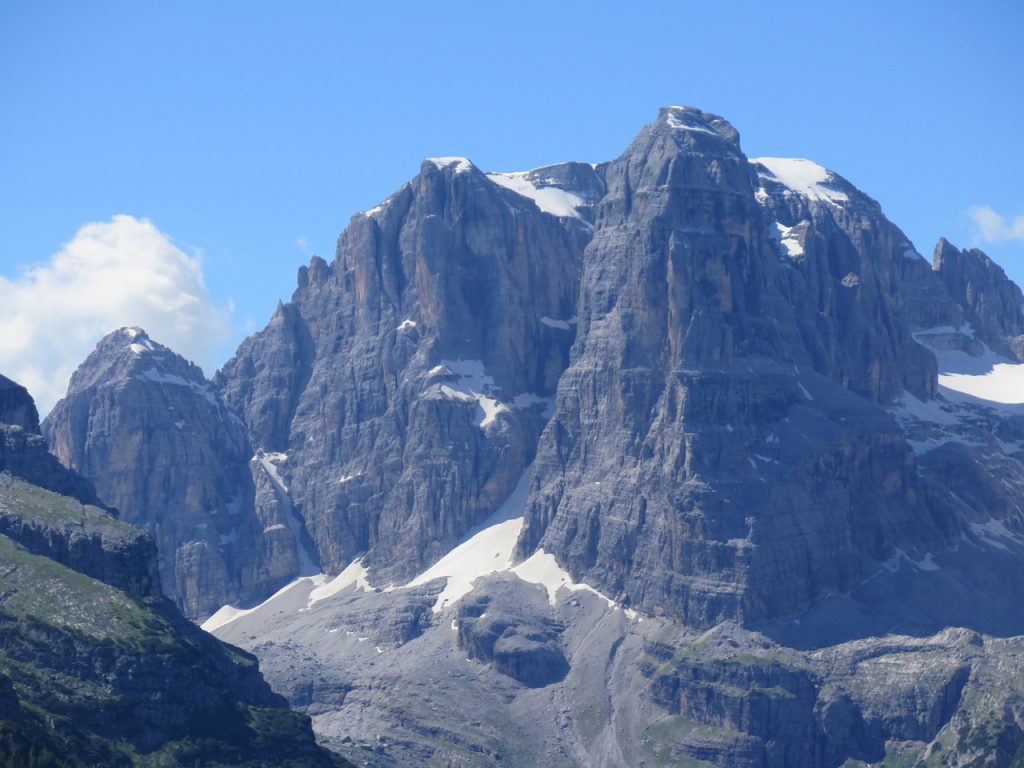 Have you had any mishaps in the ‘hills’?

Sadly a couple: in 1961 attempting a new rock route above the Bondo Glacier in the Bregaglia I had a major fall that resulted in a broken femur, helicopter evacuation and weeks in hospital near St Moritz.

The other was being hit by a rock fall in the Dolomites. I will be eternally grateful to the memory of Rucksacker Richard Harris who got me safely off the mountain.

I never thought I would be saying this but “just a hill with some lovely crisp snow, blue sky and a friend or two.”

Someone who shares aspirations and understandings. Yes, Rucksack Club member Dave Pownall. People were highly amused and puzzled by our apparent inability to communicate on long pitches… he has a vocal cord condition (some call him “Whispering Dave”) and I’m a bit deaf in both ears! And if you are looking for sheer determination Dave crossed the Glyders via Tennis Shoe, Holly Tree Wall, Continuation Wall and Grey Slab with a tracheostomy tube in his throat! What a team!

Living in Buxton there are plenty of local covid friendly walks that don’t require transport. I’m really looking forward to getting out with the Wednesday Walkers again. Cycling also helps… in a masochistic way!

No plans, just take things as they come and enjoy them.

We had many many years of annual ski holidays but I wish I could have been a better skier.

The nature of my work has always made weekends difficult so, other than the Wednesday Walks, I’ve never been able to attend many meets. However, a couple of Alpine meets, Frank Proctor’s Austria meets, Ian Howie’s trips to the Costa Blanca and Majorca and my own Jordan meet were all fantastic.

But, most important, the sense of belonging within the Rucksack Family is wonderful. People you may not have met for years welcome you as if it was only yesterday. Thanks and best wishes to everyone.