“On the hill with…” series continues with a Club legend, John Richardson, long distance runner and walker, skier, mountaineer and latterly cyclist. He has the accolade of being the only person to be elected President of the Club on two separate occasions [the second being over the 100th Anniversary]. 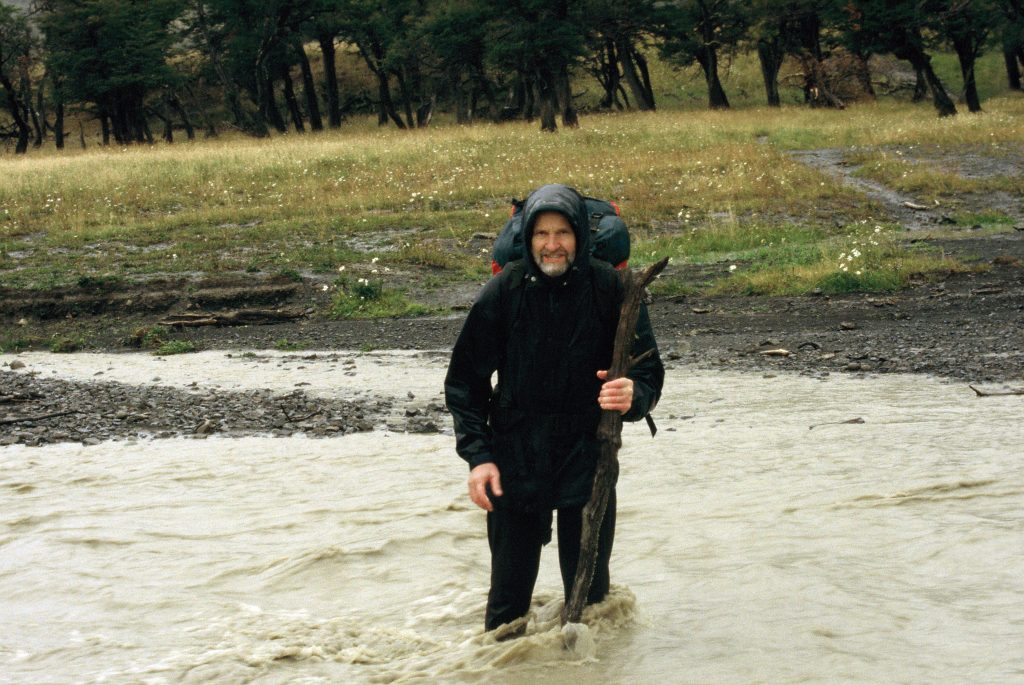 I guess it was almost written in my stars: my maternal grandfather was a lifelong enthusiast for what were then known as Walking Tours. He, Entwisle, was co-founder of our Club and served as Secretary for the first nineteen years of the Club’s existence. He raised three daughters –the eldest was my mum – to love the Great Outdoors and so this love was passed down to me. After the passing of his wife, whom he had looked after devotedly through several years of dementia, he set off at the age of 82 to walk from Land’s End to John o’ Groats [RCJ 1956 pp82-84] As the years have passed I have become ever more warmed by his memory.

The name that springs immediately to mind is Stan Bradshaw. Stan was an extremely modest but massively motivational and influential personality in the field of long hill walks and the longer fell races. He was, for instance a driving force in establishing the race around Yorkshire’s Three Peaks.

Stan was centrally involved with the revival of interest in the Lake District Fell Record [a record once held by our own Eustace Thomas] and in what is now known as the Bob Graham Round. He encouraged me to have a go at the BG [I’m number 24] and himself completed the round, though definitely not for the first time, at the age of 65

In my early years I spent quite a bit of time walking and cragging with the Manchester Rambling Club (MRC). They were quite a tough bunch, my first really long walk – Grassington to Langdale – was completed with them and they were frequently a ‘feeder club’ to the Rucksack Club. I found the MRC’s ethos of self-reliance on the hill very attractive; an approach which was also deeply entrenched in the RC. At that time, I felt rather overawed by the RC and their mighty deeds in the world’s Greater Ranges. However, after participating in several RC meets as a Guest I realised that perhaps I was being over-modest and, with the support of folk such as Ted Dance, Dennis Weir and Stan Bradshaw I took the plunge.

A casual review of a few of my most memorable hill days: an early start or even a fell-walking transition from blackest night to sun-kissed dawn. Maybe you’re climbing into the dawn up one of Snowdon’s ridges in mist and the last vestiges of the night and then, quite suddenly you emerge above the mist – an inversion – into dazzling morning sunshine. And there’s a bank of cloud to the right which captures magical Brocken spectres around your shadow and each of your few companions. Such moments live for ever in the memory.

Over many years in the hills, what have been the most memorable times?

There is, of course, huge satisfaction to be gained from setting oneself an objective and achieving it.  Outstanding among my own past objectives would be two ‘extreme’ long walks: the North Wales Horseshoe and a Winter Tan Hill to Cat and Fiddle [RCJ 1979 pp54-59]; my twenty-five consecutive, elite class Karrimor Mountain Marathons [RCJ 1972 pp6-11 and RCJ 1992 pp14-28]and “Team RCs” several wins in the High Peak Marathon. However, for me personally the most memorable times have always been contained within a broader objective.  So, back in the day, with a few RC pals I skied the Haute Route from Chamonix to Saas Fee, including a few 4000m peaks, in the most magical Spring snow and sunshine conditions. Utterly brilliant [RCJ 1984-5 pp5-12]. But my most vivid memory of that trip is a mental snapshot of schussing down across the Plateau de Trient in half a metre of finest freshest untracked powder through a sun-sparkling skim of mist. A cherished moment.

Again, one of the last Igloo Meets I feel privileged to have taken part in was on Ben Nevis. We were blessed with a moonless night of absolutely astounding icily cold clarity. We crawled from our ice-palace to gaze in awe-struck silence at the star-spangled heavens and the magnificent monochrome 360 degree views.

Have you had any mishaps on the hills and, if so, what’s been the worst?

It happened on my very first (unsuccessful) attempt at iglooing. Vin Dillon and I, linked by a fairly short rope, were on the way back from the summit of Ben Macdui, searching through mist for a reasonable descent line to the Lairig Ghru. Lots of snow, rocky patches just peeping through the crust. I buried my axe to watch Vin across such a patch and as he reached the other side withdrew it – at exactly that moment Vin’s left knee let him down. I was yanked off my stance, found myself accelerating alarmingly in my Helly Hansen PVC cag (bad choice, very bad choice) trying to scrape my crampon heels in, get over onto my axe. Then, bang! That was my weight dragging Vin off. Now I’m face down, still accelerating, looking at the next bunch of stones standing slightly clear of the snow. I remember arching my back to lift my head clear. So, we yo-yoed our way down until the slope eased and we came to a halt in the drift of fresh snow at the bottom. My top two layers of clothing were somewhat shredded but I, it seemed miraculously, was unhurt thanks to the heavy snow cover. Vin’s face was badly bruised. He was in some pain but, adamantly averse to calling out the rescue services, we managed to walk out and drive home.

Whilst attempting a re-run (on ski) of the Haute Route I fell and dislocated a shoulder. Thanks to the excellent support of John Muskett, Pete Shortt and John Patrick I enjoyed a splendid helicopter ride as far as the hospital roof.

A chipped ankle bone whilst running my eighteenth Mountain Marathon led to a certain amount of publicity. The event was covered by BBC2 television and I was for a short spell famous (notorious?) among fell runners.

I’m very fortunate to have reached a time of life when ‘hill objectives’ inevitably have to be down-sized. Nonetheless it’s good still to have an objective or two. I’ll be 80 in 2020 and I hope to mark the occasion with a ride of appropriate length in a reasonably hilly environment.

Apart from the vital qualities of trust and dependability, two qualities spring to mind. One is that a partner should be someone you can argue with, fall out with even, but know that you’ll still, at the end of the day, be the best of buddies. Mike Cudahy fills that slot perfectly for me. On top of numerous epic walks – most memorable being a magnificent Winter Tan Hill, Cat and Fiddle – we were partners for seventeen Mountain Marathons, all in the elite class.

The second quality, equally desirable, is a shared sense of humour. Several RC members come to mind here but outstanding among them is Brian Cunningham. Over the years we’ve laughed our ways from Land’s End to John o’ Groats, between the highest pubs in Wales, England and Scotland, around the coast of Ireland and, absolutely unforgettably, through the length of Norway from Stavanger to Nordkapp [RCJ 2009 pp105-112]. 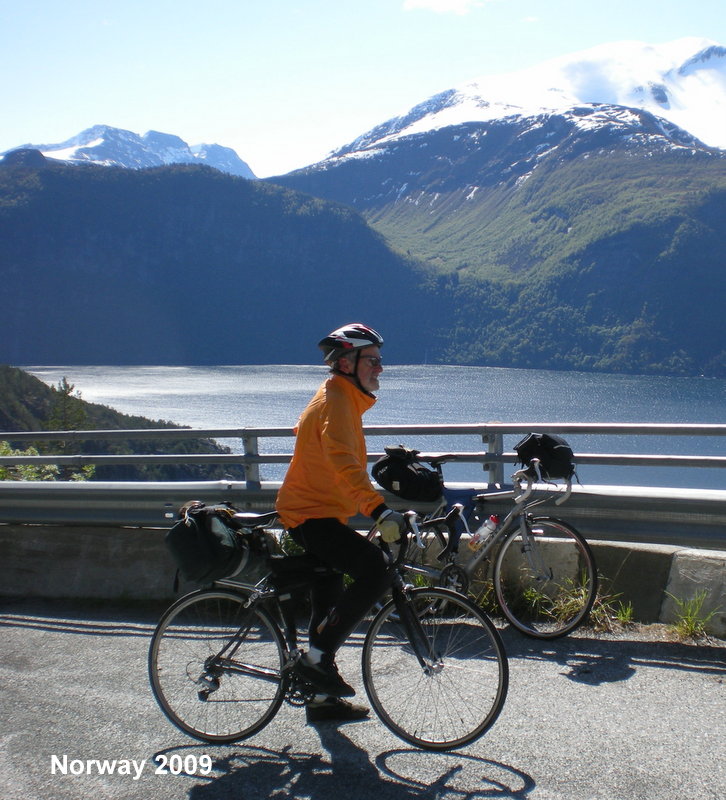 When various muscles and joints started to give some trouble I took (mainly) to my bikes, which help a lot in keeping arthritic joints moving. Horizons have, inevitably, shrunk  BUT I have a host of wonderful memories which remind me that I’ve had a bloody good, bloody lucky time whilst knackering my knees.

I’ve always tried to ‘live in the moment’ and not to dwell on what might have been. Since I cannot think of any serious regrets.  I guess I’ve been fairly successful. 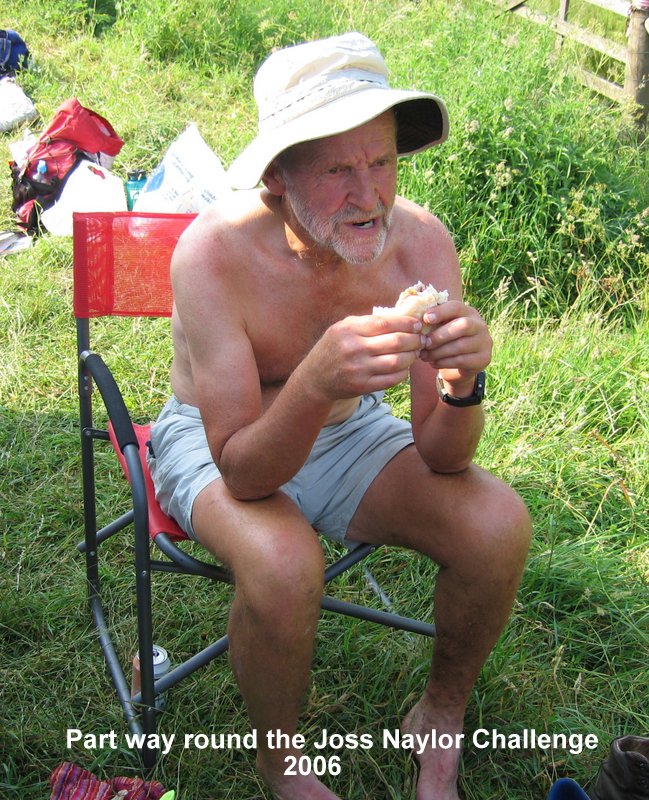 Given the links with my Grampa I have been aware of the existence of our Club since childhood. I walked, climbed and camped – on the summit of Tryfan – as a guest on several outdoor meets before joining the Club in 1970. The benefits have been beyond measure, I’ve made life-long friends mainly due to the coming together of folk with similar adventurous interests. I particularly enjoy the breadth of interests embraced by our Club beyond mountaineering, climbing and walking, such as canoeing, cycling and caving.

Perhaps the greatest asset the Club has to offer is the wonderful programme of Outdoor Meets.