One of the Clubs ‘classic’ walks is the 75 mile Colne Rowsley which has appeared on the meets programme many times over the years.  I recently found a few pictures from the meet in 2003 which I thought were worth sharing.

The start at Trawden on the outskirts of Colne 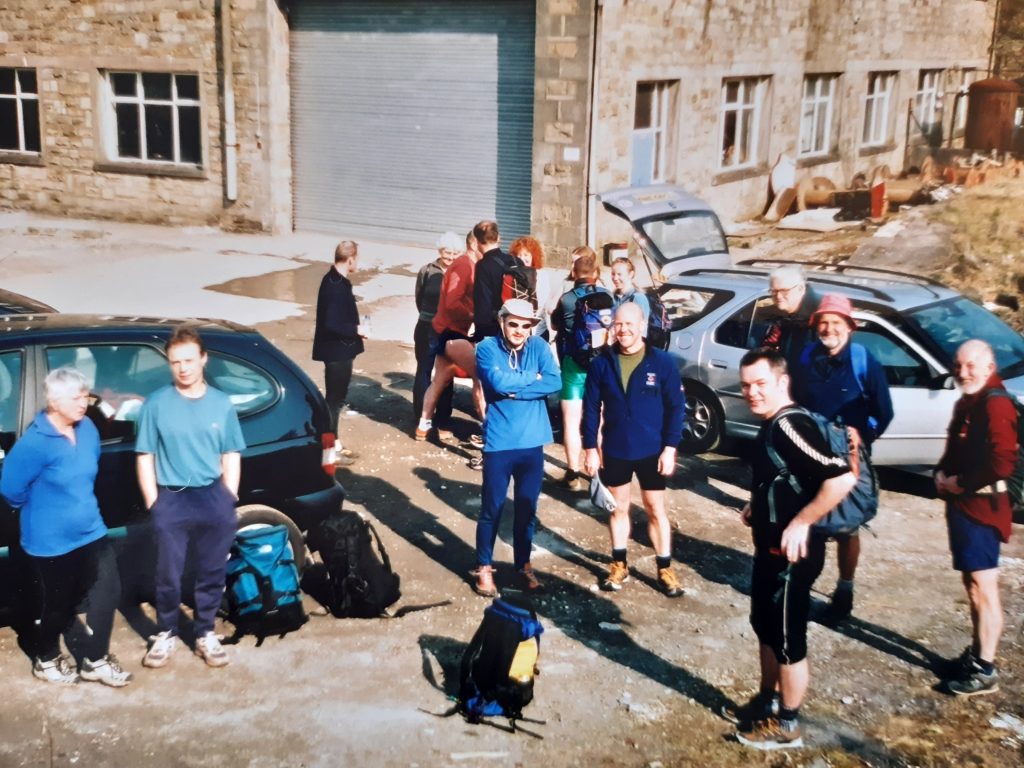 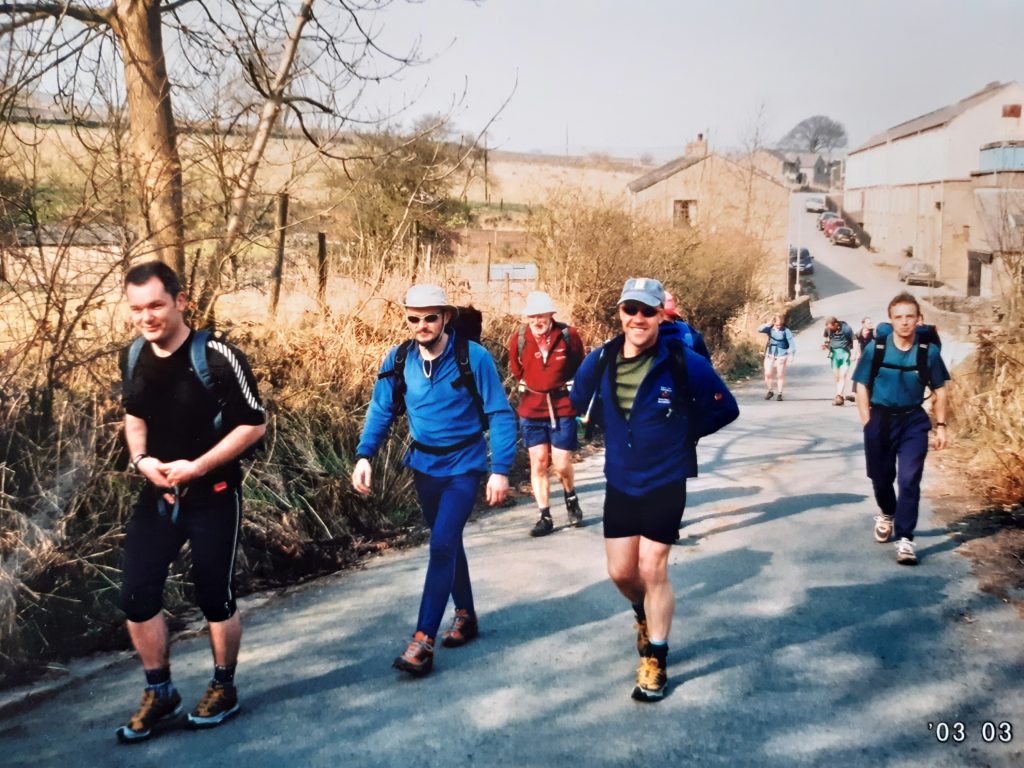 Rob Ferguson setting up the support stop at Marsden 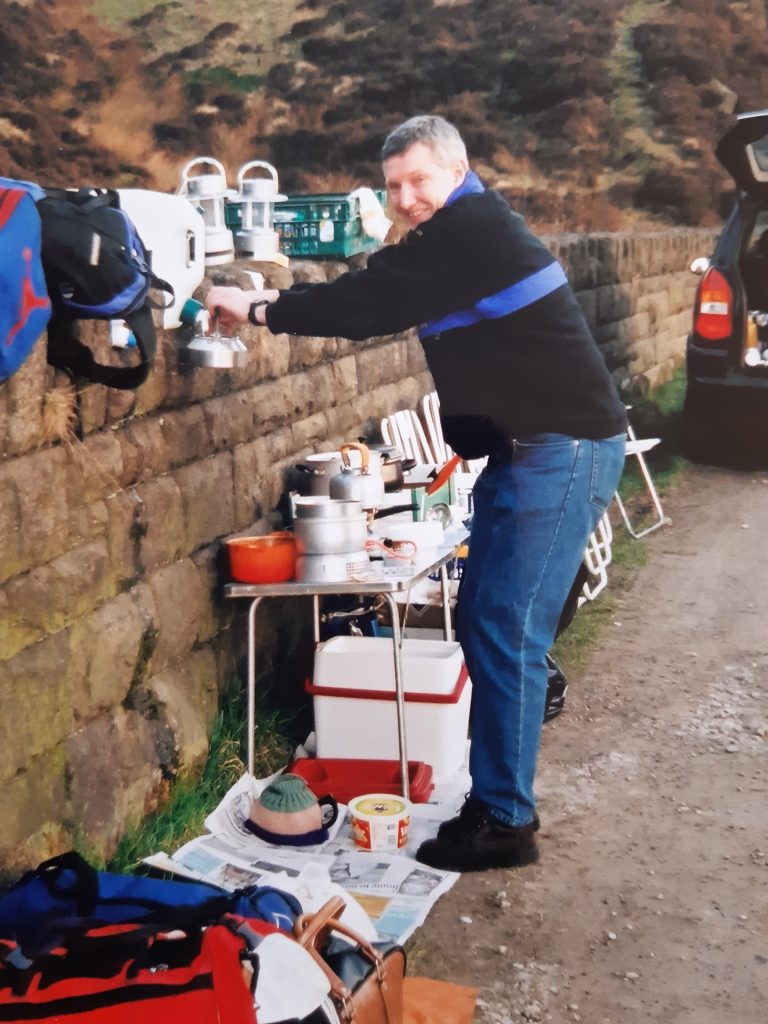 Andy’s Howie and Tomlinson enjoying (?) the evening meal at Marsden 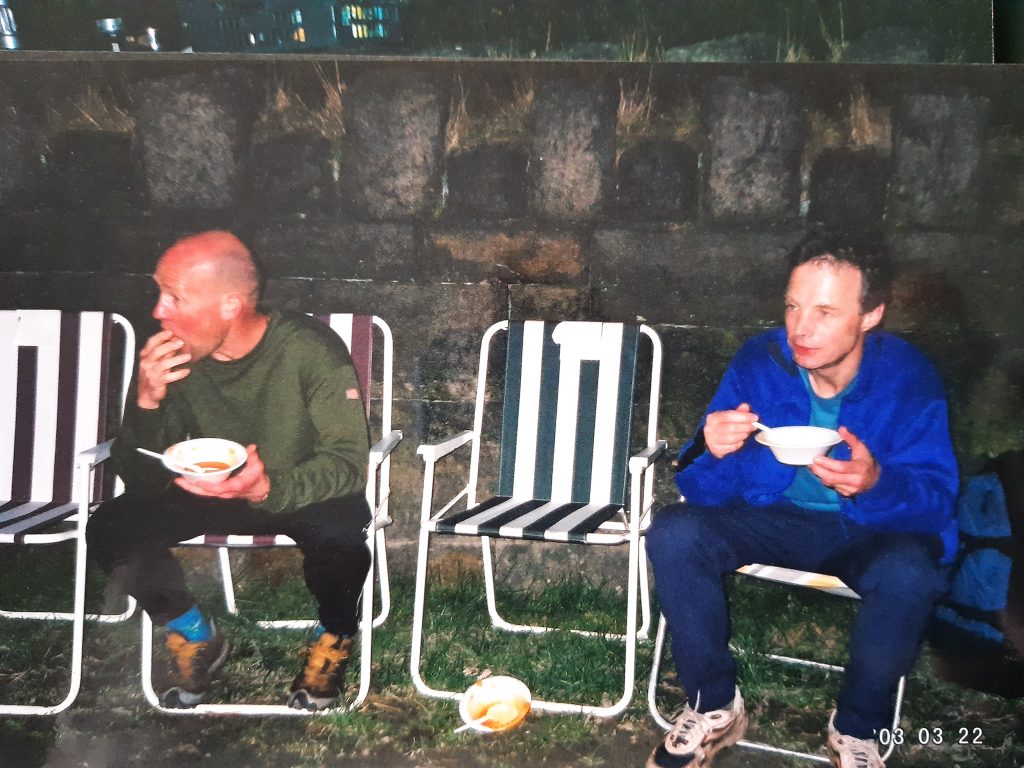 Two former Presidents and Honary Members.  John Richardson proving that he can eat his meal and tell a story while appearing to be fast asleep, while Geoff Bell listens on intently. 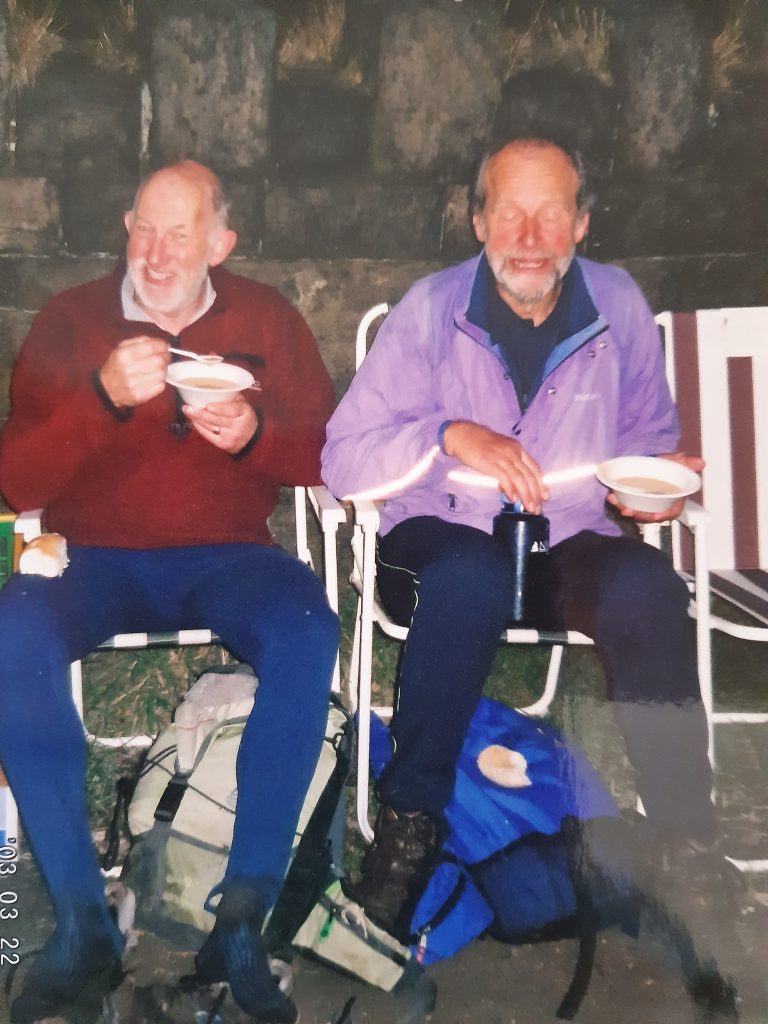 Current President (Woolley) is he dreaming of conducting an orchestra while half asleep? 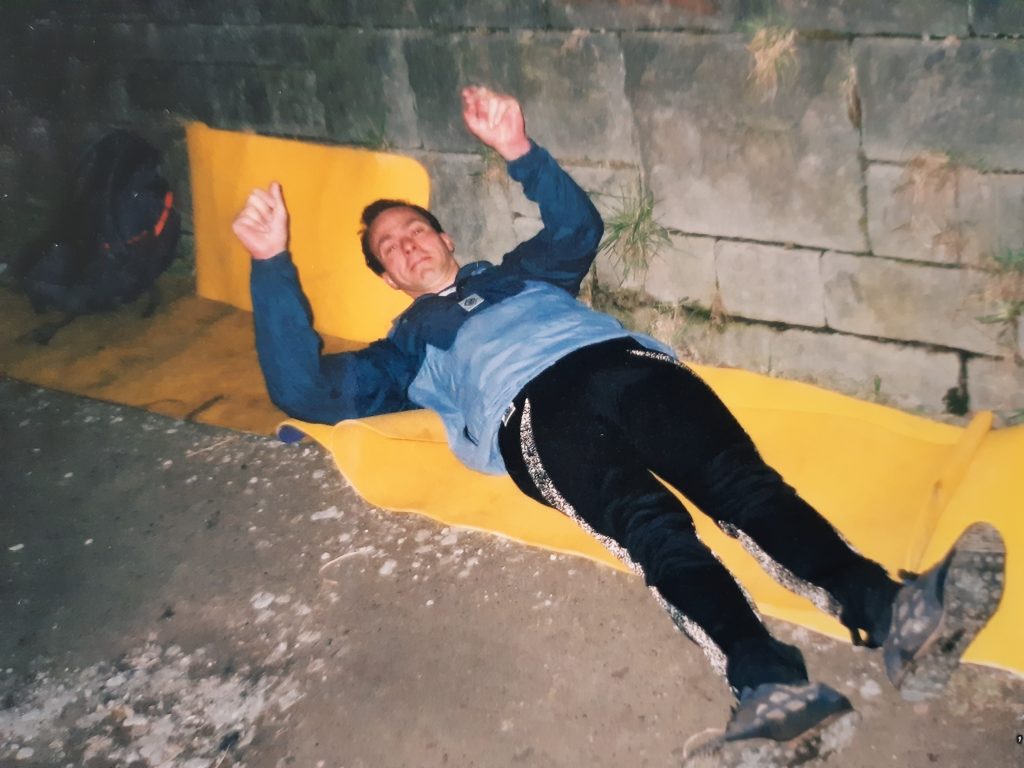 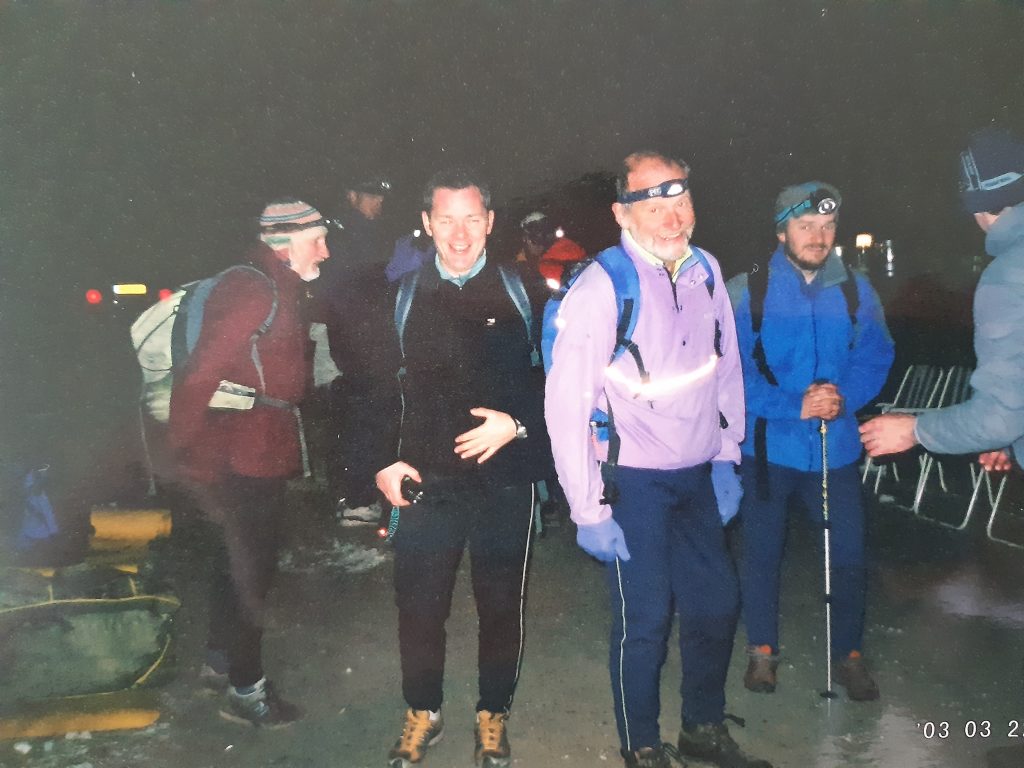 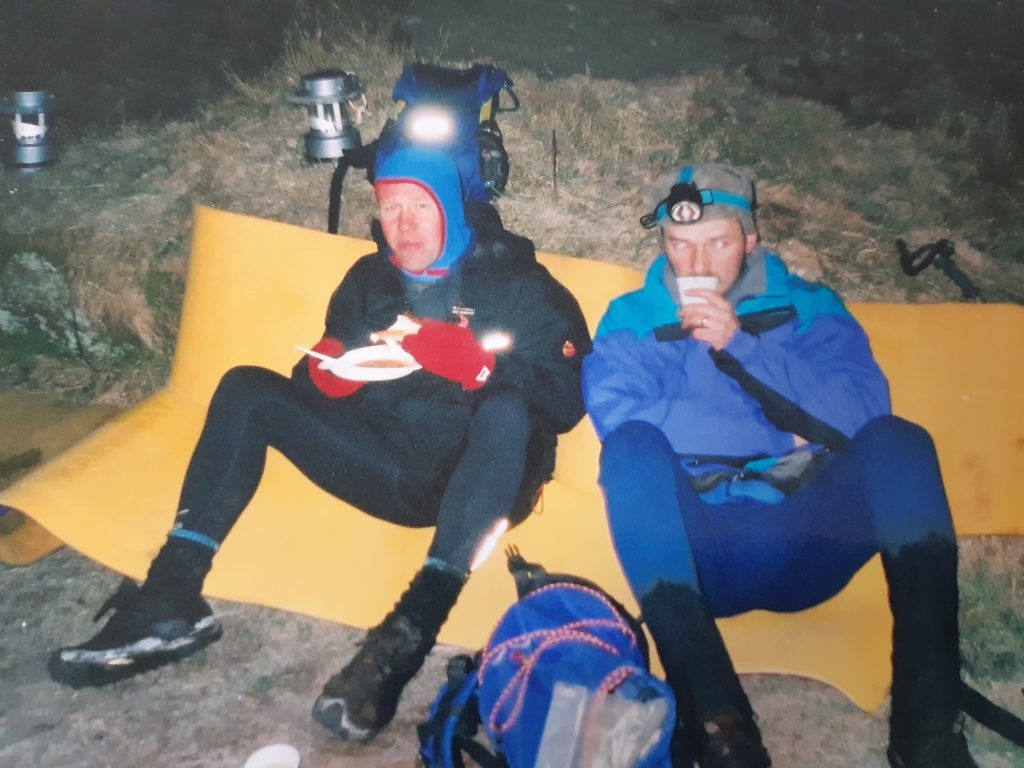 A happy Ros Murray at Rowsley 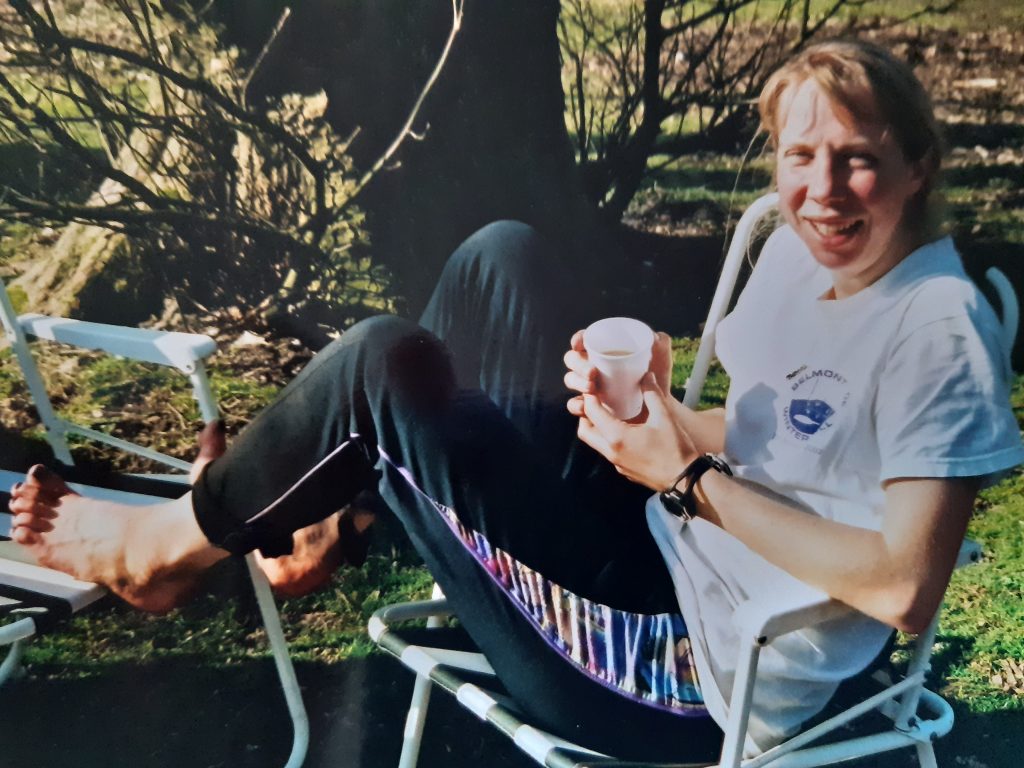 And yours truly fast asleep. 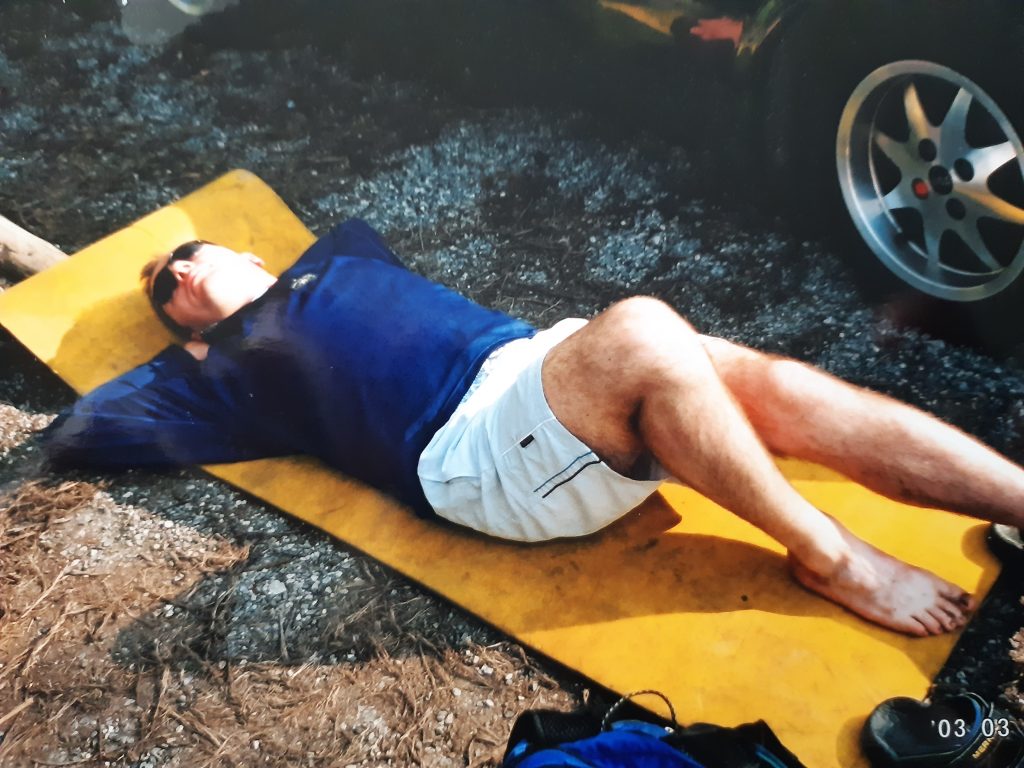 But of course the ‘elite’ always have extra energy so John Richardson was heading straight off to a fancy dress party, but was he going as Bill or Ben? 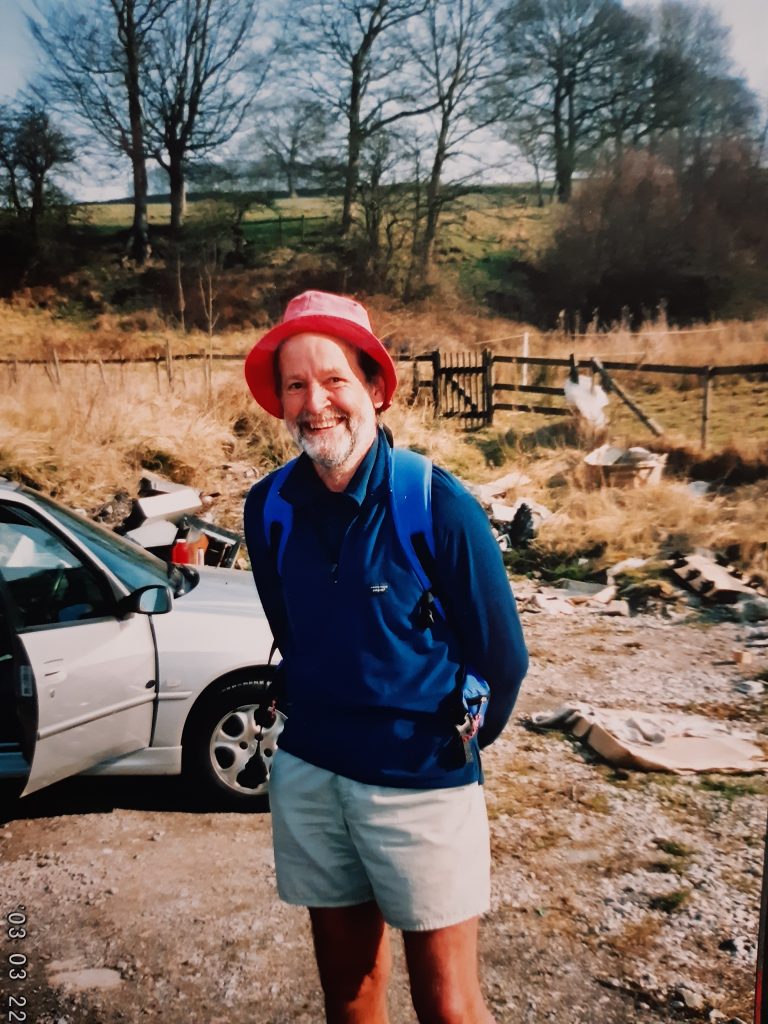 All photos taken by John Llewellyn

After weeks of glorious early spring sunshine we assembled at 10.15 Saturday morning under clear blue skies with a perfect forecast for the whole weekend hardly believable but true! We were all there on time except Dave Woolley who claimed he wanted to do the walk ‘properly’ and start from Colne railway station – 5 miles down the road – and not from Trawden, near the end of the road, where we were. However the truth will out and he simply overslept and arrived at the start 15 minutes after we had departed.

Great conditions over Bouldsworth and Black Hameldon saw us arrive in Todmorden 4 hours later, but no time to stop for cups of tea as Marsden was our first scheduled support stop where we arrived at 6.30 that evening. John Llewellyn, Rob Ferguson & Harold Woolley provided great support and an hour later we had all eaten too much and it was time to depart. By then it had gone dark and very cold but a clear night awaited us.

Dave Woolley being mindful of the torch light problems encountered over the same section many years earlier, by Messrs Kiernan & Bennett (see RCJ 1937) had, quite remarkably for him spent some money on gear and bought a new extra bright LED torch for the event. Unfortunately, as had happened all those years ago, the bulb was once again too powerful for the batteries and only moments after switching it on it had flickered out – much to the amusement of the rest of us. Our own electrical engineer (Gareth Llewellyn) was unable to fix the problem and DW’s only option other than to stumble about all night was to beg & borrow somebody’s spare.

The Holme Moss mast always gives one a good navigational clue on a clear night (but you can never see it in foul conditions when you need it) and after some rough ground we reached the Woodhead road just before midnight, with feet still dry. However Swains Head and the Outer Edges soon changed that and we all managed to become submerged to varying degrees. However the conditions were as near perfect as they can be for that area at the end of winter and certainly vastly improved on the horrid conditions encountered by those unlucky enough to have been on the High Peak Marathon only 2 weeks earlier crossing the same ground, but in the other direction.  The Woodhead Mountain Rescue Team on hearing of our plans (their leader caught Dave Woolley photocopying the schedule at work) decided that we may need rescuing, or at least some drink and fodder, and were kind enough to meet us at Outer Edge, at 2 in the morning, with masses of sticky tea and buns, which were very welcome.

The section from Outer Edge south to Moscar in the early hours of the morning was, for me at least, unbeatable (well in night walking terms anyway). Completely clear sky with the moon and stars bright enough to almost do away with the need for torches and superb moonlit views of the Peak all around. The support team at Moscar were very cold by the time we arrived at 6ish and we also soon cooled down.  However an hour later when we were walking along above Stanage we were back into shorts and it just got hotter (as did the pace) over Froggatt, Curbar and Baslow. The final charge for Rowsley was only slowed down by the appearance of Ted Dance who had turned out to check we hadn’t cheated and broken into a run.

We had all arrived in Rowsley by lunchtime which was ideal timing for a couple of very welcome pints.
It turned out to be a really ‘good do’ and with a good mix of people, some old hands (JR & GB having done the walk at least 6 times each) and with over half the party being debutants to the walk everybody was pleased to have finished in good order – almost.

It has subsequently transpired that due to DW arriving at Trawden 15 mins late, he was given a lift for the first 1/2 mile down the road to help catch us up. It does seem such a shame to have put so much effort into completing a long walk but if you miss out the first half mile can it really be classed as having done the done the whole walk ?!?!? Back to the starting line, Dave.