“On the hill with…” meets John Allen who has been very active in the mountains all his life rock climbing and mountaineering including a significant list of much sought after rock and alpine routes. His record speaks for itself and he continues to ‘get out there’ working through the Corbetts [having completed the Munros in 1991]. John was President of the Club 1976-77 and was a Hut Warden 1964-69. 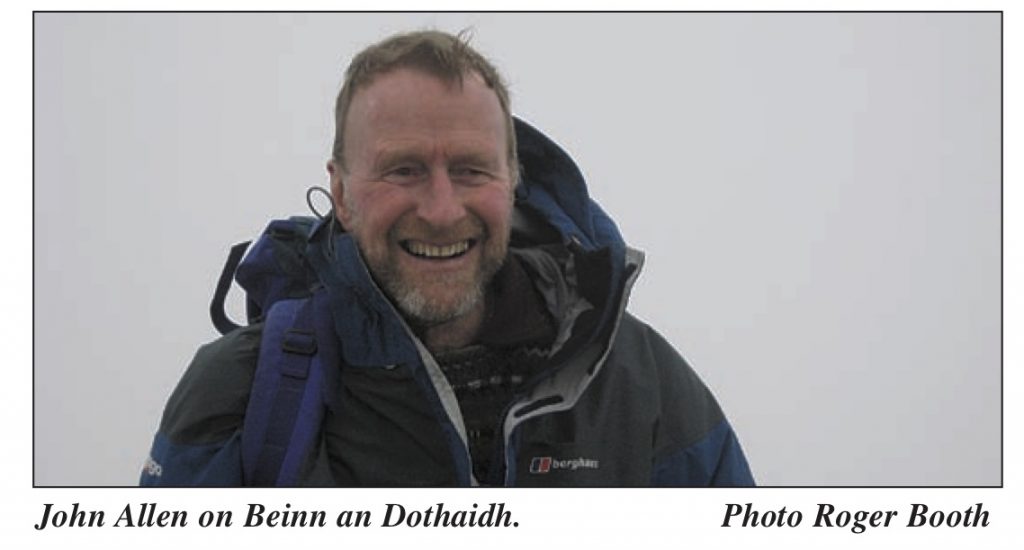 How did you get into hillwalking/climbing?

Via my parents in the early 1950s, Easter walking holidays at Sawrey near Hawkeshead.  Then, by a twist of fate, the school headmaster was a member of the Alpine Club and I was 15 when British climbers from the AC made the first ascent of Everest in 1953.  I was enthralled. The headmaster, Geoffrey Dixon, took half a dozen of us boys to huts in the Lakes (RLH), and Wales (Helyg, and Ynys Ettws) rock climbing.  In about 1955 he made me lead Eagle’s Nest Direct on Great Gable. Rope around the waist, one sling and crab to belay with, and off you go.  In 1956 he took two of us to Arolla for some really big mountains, which included the Zinal Rothorn and Alphubel [See Alpine Beginnings RCJ 2014].  I was hooked for life.

Who had the most influence on you?

Obviously, Geoffrey Dixon.  Eventually in 2012 I wrote a biography of his climbing and mountaineering life (word-only version available on Kindle for about £2.00p).  Also the 1953 Everest team, some of whom I met and worked with later in life.

How did you come to join the Rucksack Club?

After an unsatisfactory academic education at King’s College London, and being unhappy and deprived of hills in London, I moved back to the Manchester area because of the proximity to the mountains of North Wales, the Lake District and Peak District.  Researches at the Central Library revealed the name and address of JE Byrom, Hon Sec of the Rucksack Club, with a list of meets.  Eric Byrom dropped me a postcard to note the next available one, requiring me to catch a train at the old Exchange Station to Marsden one Sunday morning, walking to Edale and catching a train back to Manchester on the same day, if not benighted.  On that last train were Arthur Clarke and Harold Woolley, both members of the RC.  I felt that I was on home ground with these guys!  This club had Beudy Mawr in North Wales, produced an annual Journal, and sported a history of derring-do in the mountains. 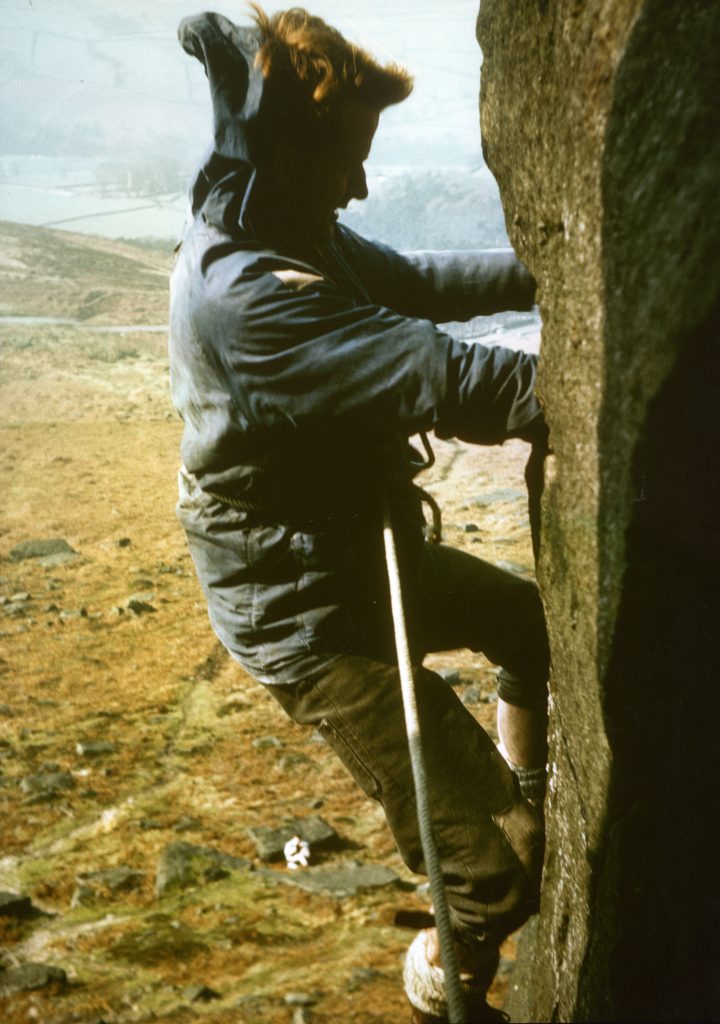 John at the top of Inverted V, Stanage 1966. Photo C. Meredith. [Ed…note the rope tied round the waist and little gear attached!]

What does the perfect hill day consist of?

A day’s rock climbing with a mate [see “Rock Climbing Circuit of the Llanberis Pass” below from RCJ 1965], successful ticks, followed by beers, food and deep sleep. Or in the Alps, a summit or route long sought after, and descent for a rest day.  Or on a multi-day or multi-week excursion, returning undamaged, content with the outcome, even over the moon; ready for next time with the same mates. 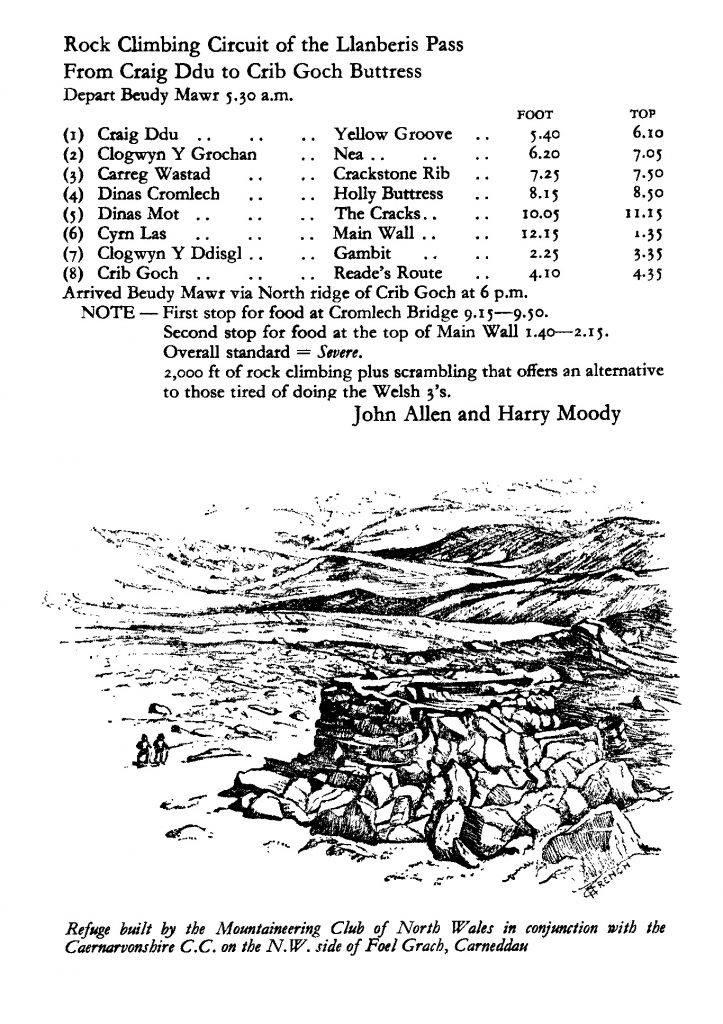 What have been your most memorable times?

Many days in the Alps [See What’s it all about? RCJ 1973]; 1960s fun week-ends at Beudy Mawr and on Cloggy; completing the Welsh Threes in winter conditions (January 1965) with Taffy Davies; Skye Ridge meet in 1965 with Harry Moody; leading Cenotaph Corner and CB on Scafell in 1966. Zmutt Ridge in 1963 with Gerry Gee; Old Brenva on Mont Blanc with Roger Whewell in 1965; Nampa Expedition in 1970; leads of Dragon, Gob, Fionn Buttress on Carnmore and Dawn Grooves, King Cobra, Great Prow and Jib on Skye (1974) with Ronnie Richards (SMC/JMCS);  day trip from Manchester to do Crucible in Cwm Silyn with Peter Standing;  traverses of Mont Blanc de Cheilon, La Ruinette, La Singla, Les Bouquetins, and the Dent Blanche in 1971 with John Russell; ascent of Phabrang in India (1974) with Brian Cosby and Jeff Mason; dragging a sledge across Spitsbergen in 1976 with Ted and Jean Courtenay to climb the highest peak, Newtontoppen; 1975 seconding Dave Cowans on Great Corner, Plexus, Cemetery Gates, White Slab, First Slip, and taking Wolfgang Stefan up Great Slab on Cloggy.  Winter Skye Ridge attempt in 1978 with Mike Edwards.  In 1996 relocation to Loch Tayside in southern highlands for winter mountaineering in Scotland; enlisting local people in 2001 to write a future conservation management plan for Schiehallion for the John Muir Trust under Dick Balharry.  Solo and accompanied treks in the Alps, Lofoten Isles, Italy, Kyrgyzstan, France and Switzerland.

Have you had any mishaps, and if so what has been the worst?

This is a hard question for me.

I would like to be able to limit this answer simply to breaking a leg (twice, different leg each time, once in collision with a skier and limping off, secondly in the Alps on loose rock, with helicopter rescue).  But worse than that, however, and tragically on two occasions, a guy died on my watch.  The first was in 1966, when RC member Richard Harris died of hypothermia in a storm close to the summit of Mont Blanc after we had completed the Sentinel route. The second was in 1968 when a loose boulder knocked KMC member Brian Ripley over while climbing Malubiting in Pakistan.  Moments earlier we had been roped, but to prevent the rope dragging and possibly tumbling rocks onto friends below, we unroped.  The boulder pitched him off balance and he was gone.  If we had been roped, maybe he would have been saved; or otherwise; a lousy experience overall, despite high hopes and optimistic toil.

Both deaths have haunted me variously over a lifetime.

Reaching the next Corbett summit. [See Counting Down Corbetts RCJ 2018].

What makes a great ‘hill’partner?

Someone prepared to follow my plan.  Equally, me following someone else’s plan.

Hills visible through my window. By keeping active in the hills.  Climbing always seemed the best training for climbing. 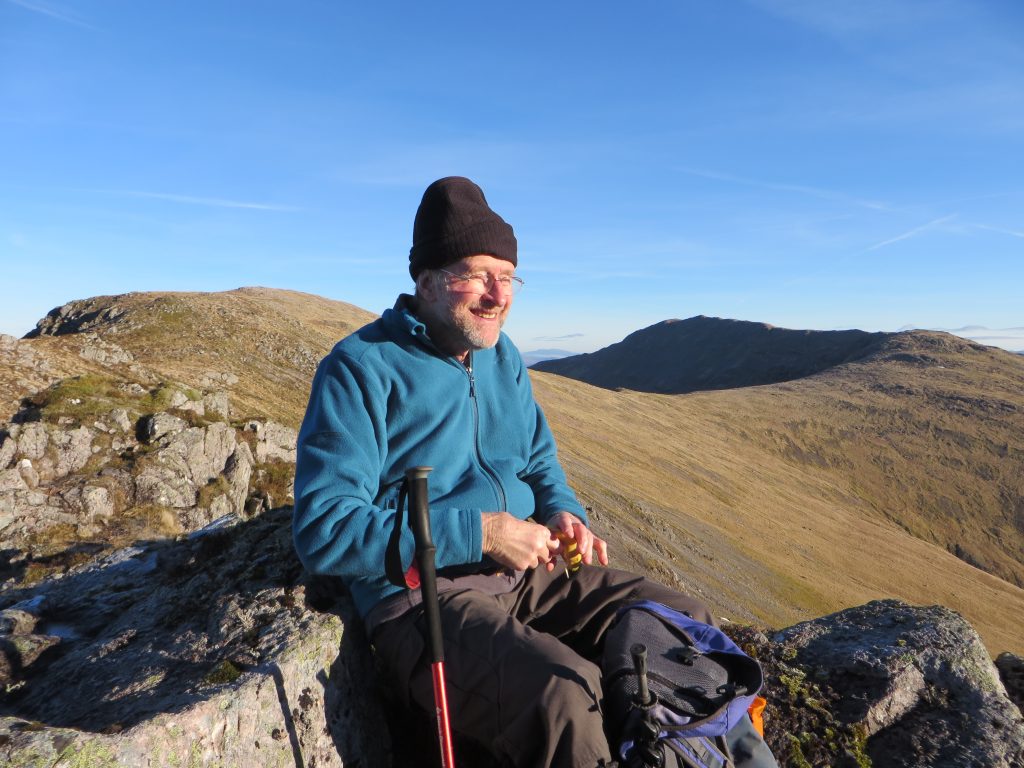 John on Am Bodach, Aonach Eagach 2017

…and do you have any tips?

Make sure you reach pension age and can afford to follow some at least of your retirement dreams.

I consider myself to have been very lucky.  Brought into climbing via the Victorian traditions of Geoffrey Dixon’s tutelage, I have managed to survive from derring-dos through to decline, now concerned that I might not get all the Corbetts ticked, and certainly won’t do any more on rock because of arthritic hands.

A trek in Antarctica. Life is too good to bemoan missed opportunities. Perhaps inactive sunny days with leg in plaster while recuperating from injury.  Don’t get injured.  Follow the physio’s recovery plan.

As a past President, I would like to add an extra question and that is what do I think makes a good Rucksack Club member?

They should be adequately competent on rock, snow and ice (i.e. be an aspiring mountaineer), can lead and will follow, ready to accept privations; matey; willing to contribute to the Rucksack Club and mountaineering generally.

Do you have any further comments?

I have concerns that The Rucksack Club seems to have drifted from the narrower definition of a mountaineering Club when I joined (1961) to a multi-activity outdoor (and indoor) club in 2020, and to a hut owning club.  Are these two aspects what we want in the future? I appreciate I have been absent from the Manchester scene for many years and thus am not intimately aware of local developments over the last thirty years, including the use of mobile phones, social media and the web.