On the hill with…Is the turn of Betty Hamer who, as she says later, was one of the  early female members of the Club….having completed the Munros before joining! She has been a very active member of the Club and, amongst other things was hut warden at Craigallan between 2004 and 2012. 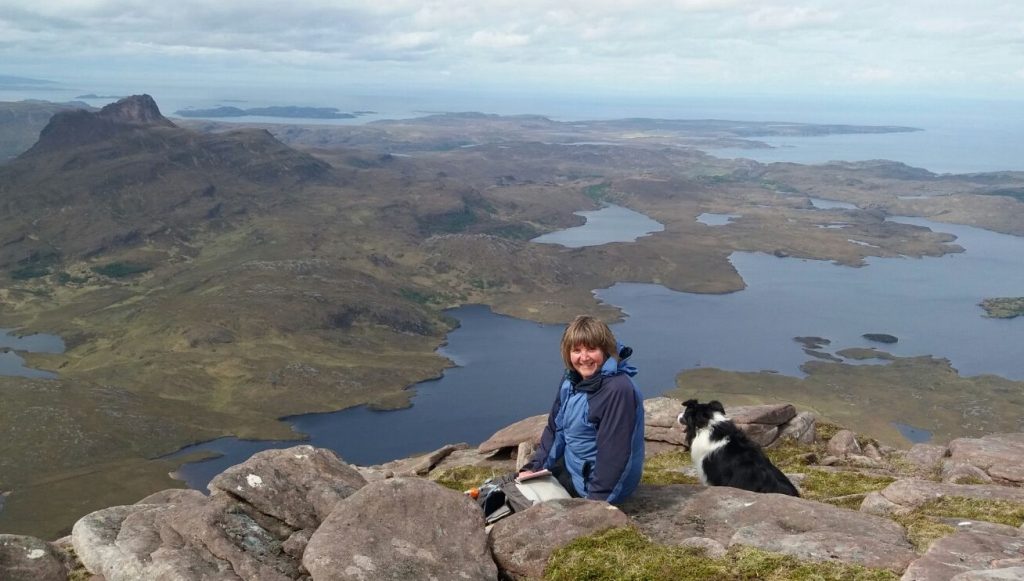 How did you get into walking?

I was brought up in the N.E. near Durham. The Sunday outing and picnic was a part of my early childhood, very often to the coast but when Dad discovered the Lake District on a day’s coach trip to Ullswater life changed; he had seen the hills. He bought a tent for the three of us girls, a mattress to put in the van for the two of them and thus began our regular visits to Parkfoot on Ullswater that lasted all my teenage years. He never took a week off work; we went almost every weekend from Easter until September. My first Lakeland hill was Hellvellyn (at 13), over the edges and wearing Hush Puppies with no tread and I don’t remember any fear!

When John and I got together at Sheffield University my hill walking extended to Scotland. Ben Macdui was my first Scottish mountain and has remained a favourite ever since. We took the bus from Aviemore and set off up Cairngorm from the car park and within a very short time he was about a quarter of a mile in front of me. I sat on a rock and waited. When eventually he walked back down I said that if he was always going to go at that pace he could have his ring back! A compromise was reached which lasted all our life. After Cairngorm we headed across to Ben Macdui. I was inadequately dressed for an unexpected whiteout in July and while sheltering in the now demolished Curran Shelter John admitted we would miss the last bus and would have to walk back to Aviemore along the Laraig Ghru. My initiation into long days on the Scottish hills had begun.

Apart from Dad and John I was greatly influenced by my late friend Jackie who got me back onto the hills when Paul, my son, was very young. We did the Cumbria Way, parts of the Coast to Coast, the West Highland Way (WHW) and had lots of days on the Lakeland hills. Jackie and I had to do the WHW in the 5 days that the two Dads had off work and on a ‘rest’ day we climbed Ben Lomond. Snow on hills as far as we could see re awakened my interest in the Scottish mountains. John Patrick was one of a group of colleagues, at the school where I taught, who played a significant role in encouraging John and I to become more adventurous in the mountains. We heard about the Munros and John Patrick introduced us to the Alps and the Rucksack Club. I am especially grateful to JP. for including me in a series of summer expeditions to Scotland with a small group of 6th Formers. We camped at Loch Etchachan on a backpack from the Linn of Dee to Loch Morlich, at Shenavall to do A’ Mhaighdean and Ruad Stac Mor, at Soulies in Knoydart and near the summit of Ben Attow in Kintail. To be introduced to so many magical places was a complete joy.

How did you come to join the Rucksack Club?

As a colleague John Patrick had talked about the Rucksack Club and I had begun to realise its status in the mountaineering world. I’d also had a delightful chance encounter with Bill Russell at the gates of Strathfarrer in 1991 when I gave him and John O’Keefe a lift up the glen to save them the long road walk after the 4 Munros. The conversation in the car eventually got round to our mutual friend in JP and the Club. Bill was often referred to by my John as ‘Betty’s Scottish pick-up’!

We’d had a few summers in the Alps with the Patricks but in 1991, 29 years ago, they suggested we join them at Saasgrund for the Club’s Alpine Meet. I was somewhat overawed by the company. Don Smithies was Meet Leader and there was the President, Gerry Gee, Ian Howie, John Farrow and Bill Russell again, to name but a few. Significant for me was the prescence of Gordon Adshead. A mass ascent of the Strahlhorn was planned. My John went off to do the Allalinhorn. I intended to just go to the Brittania Hut for the night. Over supper I was persuaded to join the Strahlhorn party and was invited to join a rope with Gordon and the late Peter Ayscough. 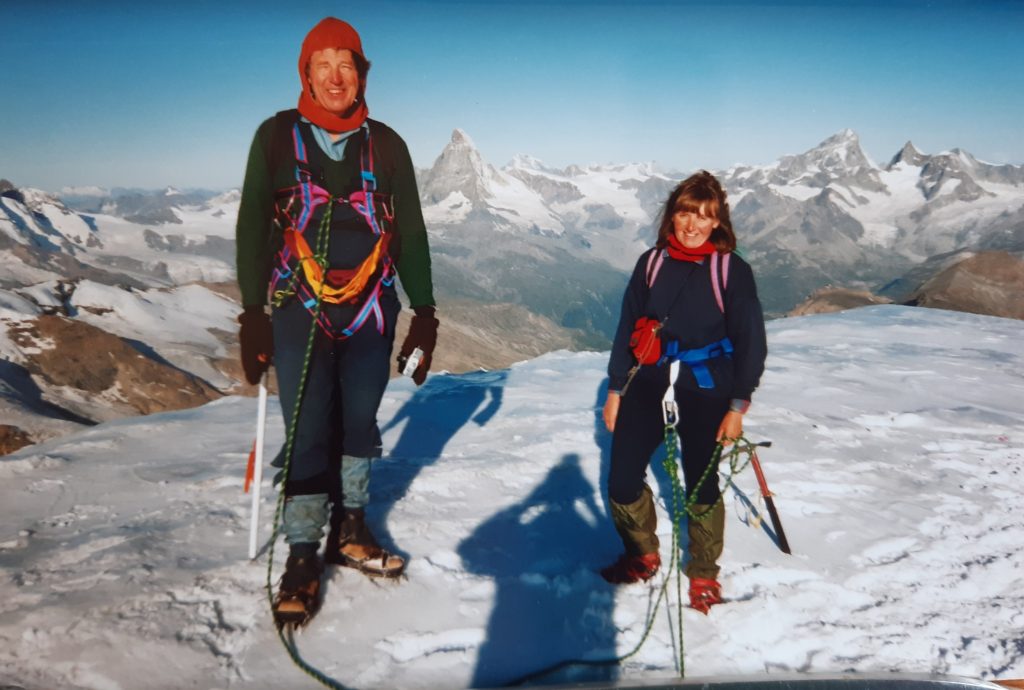 Betty and Gordon in the summit of the Strahlhorn

It was a memorable day with perfect Alpine conditions. Following on from Saasgrund we joined the club at Neustift and on some of the High Camps. Carole Smithies and I discussed my possible membership. There were few women in the club and an application by me would be taken very seriously. I remember Gerry Gee questioning me in the very nicest way at a High Moss New Year. Ian Howie and Brian Rhodes were also enquiring. Keith Treacher said I was ‘clubbable’! It was a great honour to be elected in 1994 at the time the 10th female member of the club.

What does a perfect hill day consist of?

How many times do you have the perfect day? For me it’s a combination of things coming together. It could be a favourite mountain, great snow conditions, far reaching views or a new experience but the most important element for me is a good companion. I’ve been fortunate to have had a few of those. John was my walking friend for over 40 years, Dick has been at my side for 4 years or so and I’m lucky to have had great days out with my many friends in the club and those living locally in North Cumbria. The best days are those that linger in the mind long after, when any discomfort is forgotten. Sometimes a solitary walk is just what is needed. I can feel satisfied revisiting, over and over again some of my favourite hills. Walking over familiar ground, not having to think about navigation and seeing things you’ve not spotted before makes for a very relaxing day.

Over many years in the hills what have been the most memorable times?

There have been so many memorable times in the mountains! A few come to mind.. 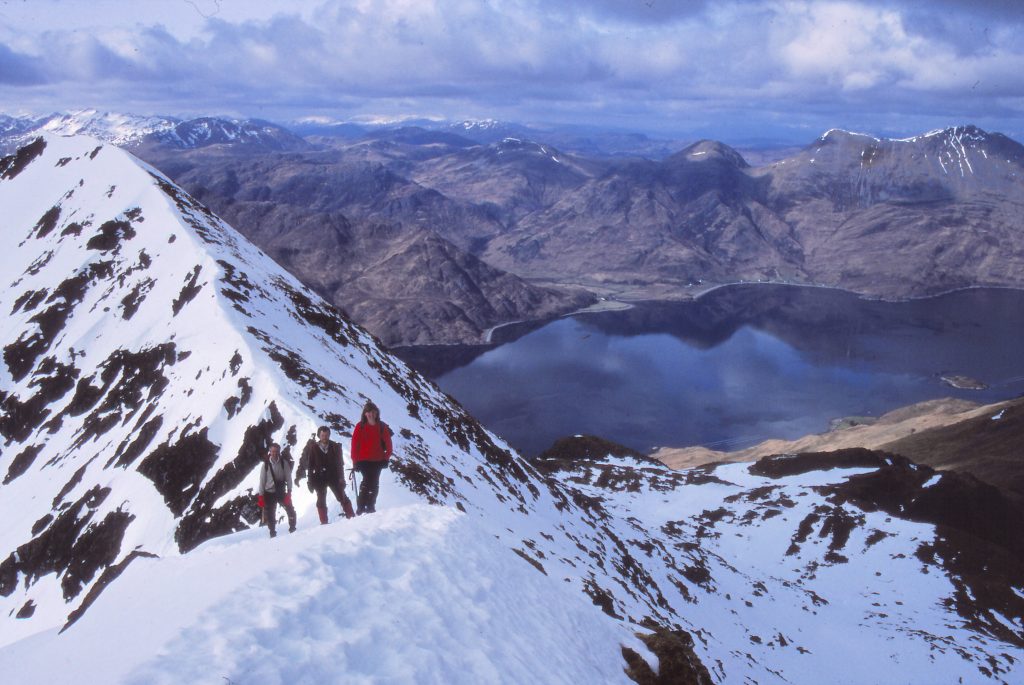 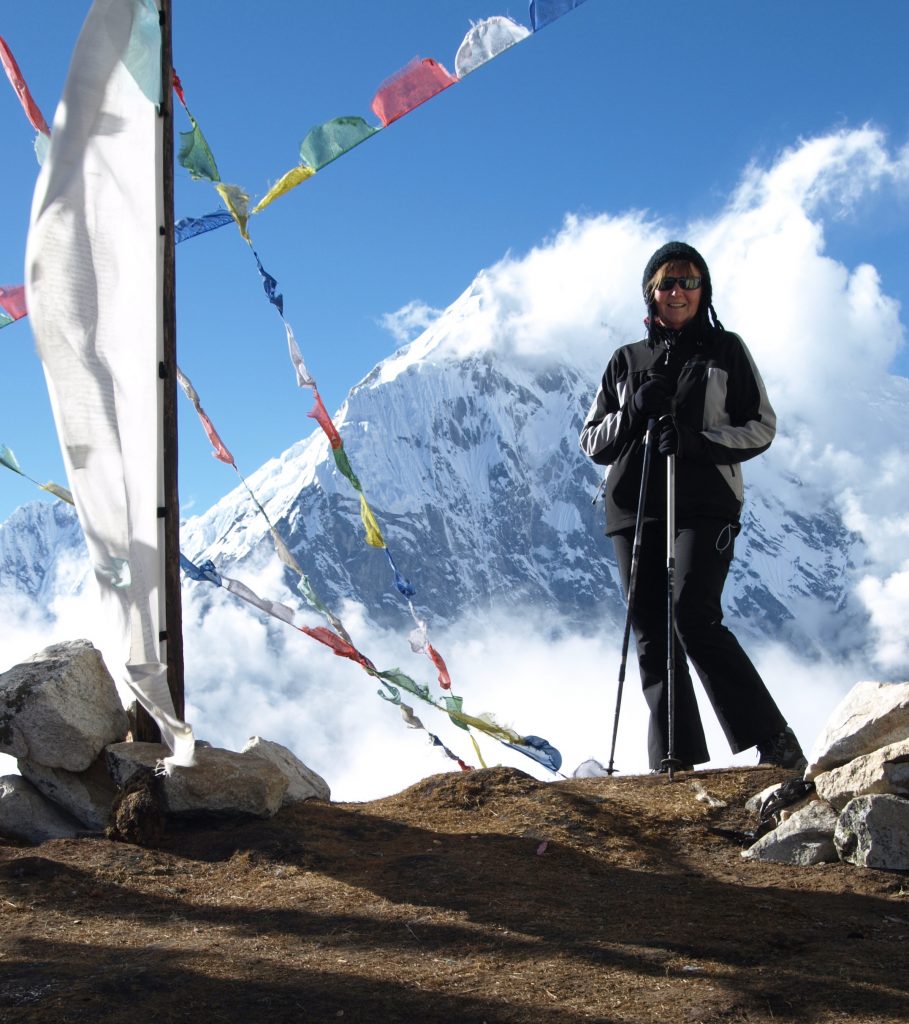 High above the Langtang Valley, 2008

What makes a great hillpartner?

Someone with the same enthusiasm and willingness to tolerate my slower speed! For over 40 years John filled that box. Dick now does the same. I mustn’t forget however all those other friends who have ticked the box too…I’m sure they know who they are.

Its hard work now as I’ve never been a natural athlete like so many in the club. I just keep going…climb a hill at least once a week in the Lakes or locally. Bonnie my border collie helps with that.

Do you have any missed opportunities?

No I don’t think I’ve had many. I have always sought to have new adventures and especially to take advantage of the club’s outdoor program. I consider myself to be very fortunate.

Have you had any mishaps in the hills and any regrets?

No account of my life could be written without reference to the tragic week on Skye in September 2013. The two days spent at the hut in Glen Brittle after John went missing are the worst in my life. I lost my best friend, my husband and the father of our son Paul. Regret and ‘what if’ can gnaw away at you and have the potential to destroy who you are. The decisions taken were not unusual on a day in the hills. Every day I have is a day John doesn’t have and I endeavour to fill each one with positive thoughts and actions always appreciating the friendship which surrounds me.

What have been the benefits of Rucksack Club membership?

Firstly there are all those opportunities created by being part of  the club, the great meets on offer, the meets I’ve so enjoyed organising such as Inverie in Knoydart, Gerry’s Bunkhouse at Achnashellach, Mar Lodge, Skiddaw House and of course at Craigallan…all filled with laughter and good company. Being asked to be warden at Craigallan was a great honour. It involved a lot of committment and hard work for both of us but the positives were huge. I met and got to know so many of the club’s members who otherwise would have just been names in the register or handbook. First and foremost though there are the members…so inspiring, adventurous and supportive and so many my friends. I am proud to be a member.