‘On the hill with…” returns with a look into the very full and active life of Helen Oughton. Helen will need no introduction to any Club member, as she has been a very active member for as long as I can remember…and I’ve been a member longer than she has! 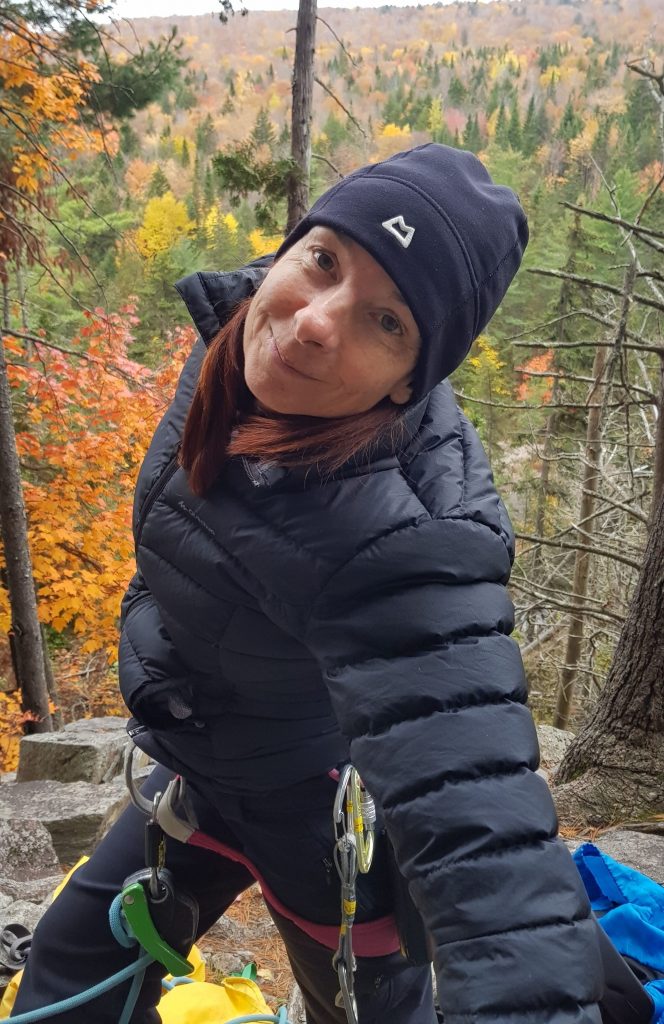 My parents (Pete and Chris Cockshott) took me walking and climbing from babyhood (see the picture of me at the Roaches when I was just a few months old) and I toddled over rocks and mountains from about the age I could walk.  I like to think we have perpetuated this cycle of abuse with our own children. 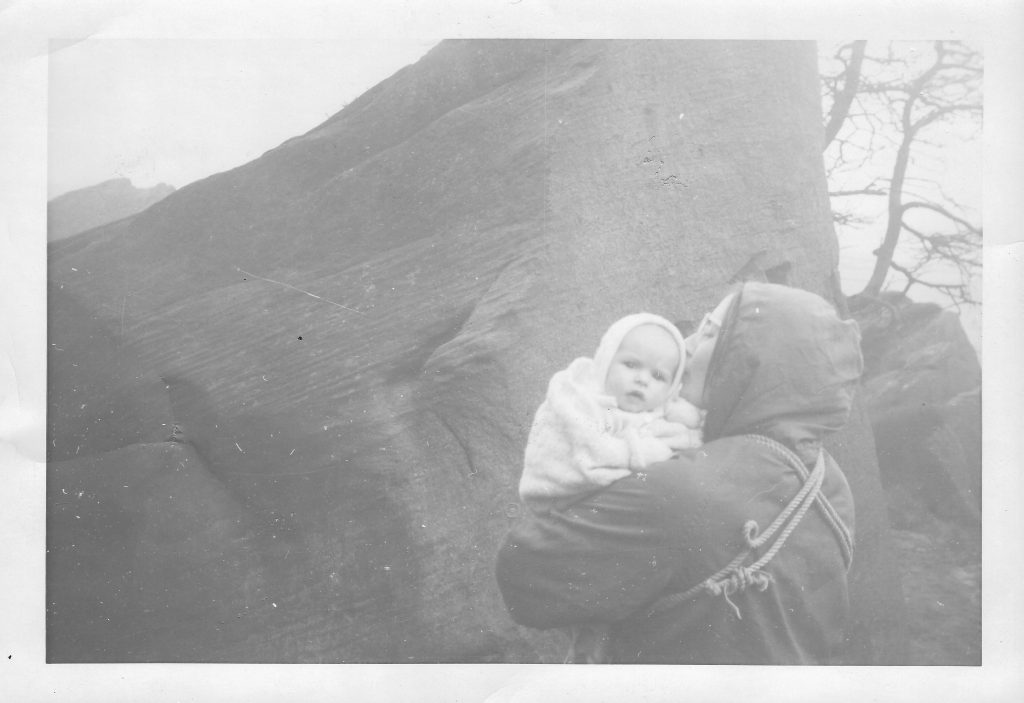 This has to be my Dad – not least because he is also the earliest influence on Dom’s mountain experiences too!  We still strictly follow the rule (developed by Dad in conjunction with Peter Benson, I think) of “three routes before butties”.

My parents were in a mixed-sex climbing club (The Mountain Club, based in Stafford) throughout my childhood.  So my sister and I were horrified when my Dad joined the Rucksack Club, in the early 80s when it still only admitted men.  I was sure that I would never want to join such an outdated and discriminatory institution!  But time moved on, and so, thankfully, did attitudes in the Rucksack Club.  I actually came back to the club through a completely different route, having fallen in with the Black and Tans in the early 90s.

Sunshine, great companionship, and a good choice of beers at the end of the day.

This was a tough question to answer as there have been so many, so the following is a rather random cross-section!

I have magical memories of climbing on sea cliffs with my unborn children.  I didn’t even know I was pregnant with Natasha when we did Magical Mystery Tour on the Toix Sea Cliffs in Calpe.  But I had no such excuse when I did A Dream of White Horses while pregnant with Jake – I just wanted to get it done before we needed childcare for two children rather than one! 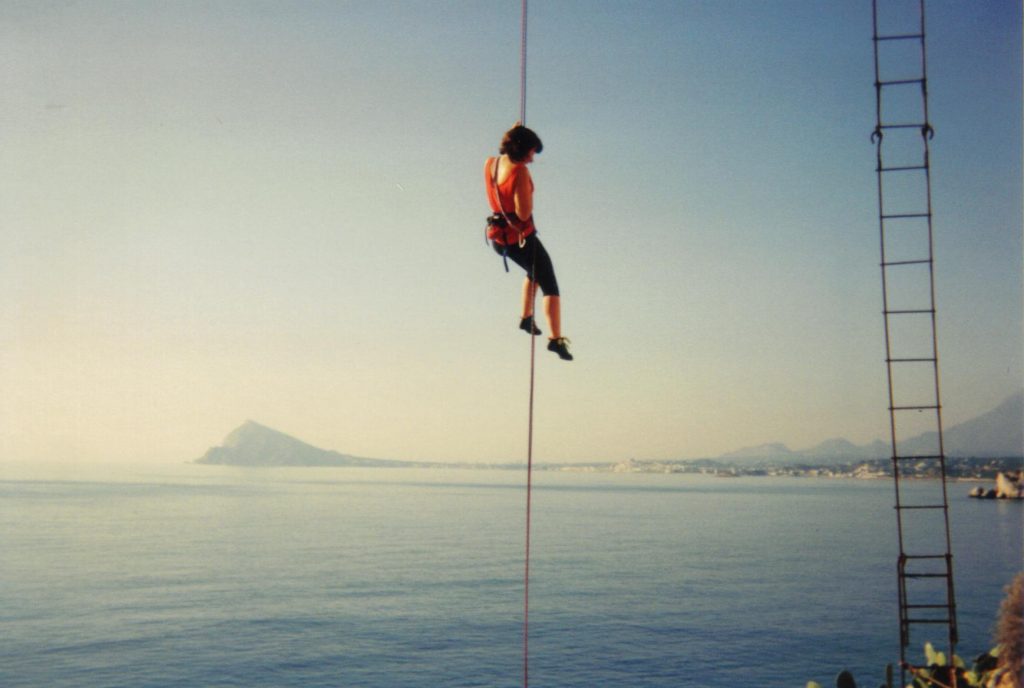 Helen (and the unborn Natasha) abseiling down in to Toix Sea Cliffs for Magical Mystery tour.

The Rucksack Club alpine meet at Ailefroide took place when our kids were aged 4 and 1½ – so finding time for big climbing adventures was going to be a challenge.  I was exhilarated to get the opportunity to climb Voyage en Cathiminie, with Raj (Richard) Tewson.  Graded TD+ 6b at the time, I was very pleased to successfully swing leads on this on this 8-pitch day out, including one of the 6b pitches as my first ever 6b lead.

Our children soon ceased to be barriers to climbing and instead became partners.  Family outings started to include adventures like the amazing Angels Landing Trail in Zion National Park, Utah, a very steep and exposed scramble in this mountainous desert canyon. 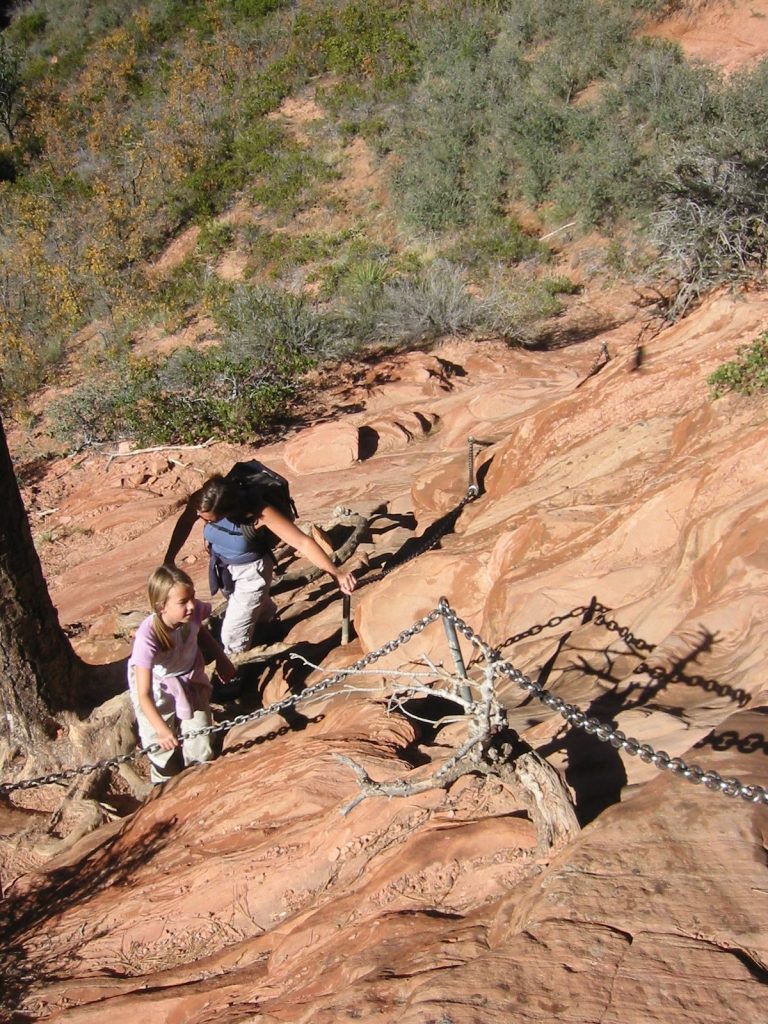 Spotting Natasha as she tackles the chains on the Angels Landing Trail, Zion National Park.

Climbing at Amieb Ranch, Namibia was surreally memorable.  Not for the routes, which were pleasant but unspectacular sports routes, but because of the herds of zebra and giraffe roaming at the foot of the crag, rather as sheep do on British crags. 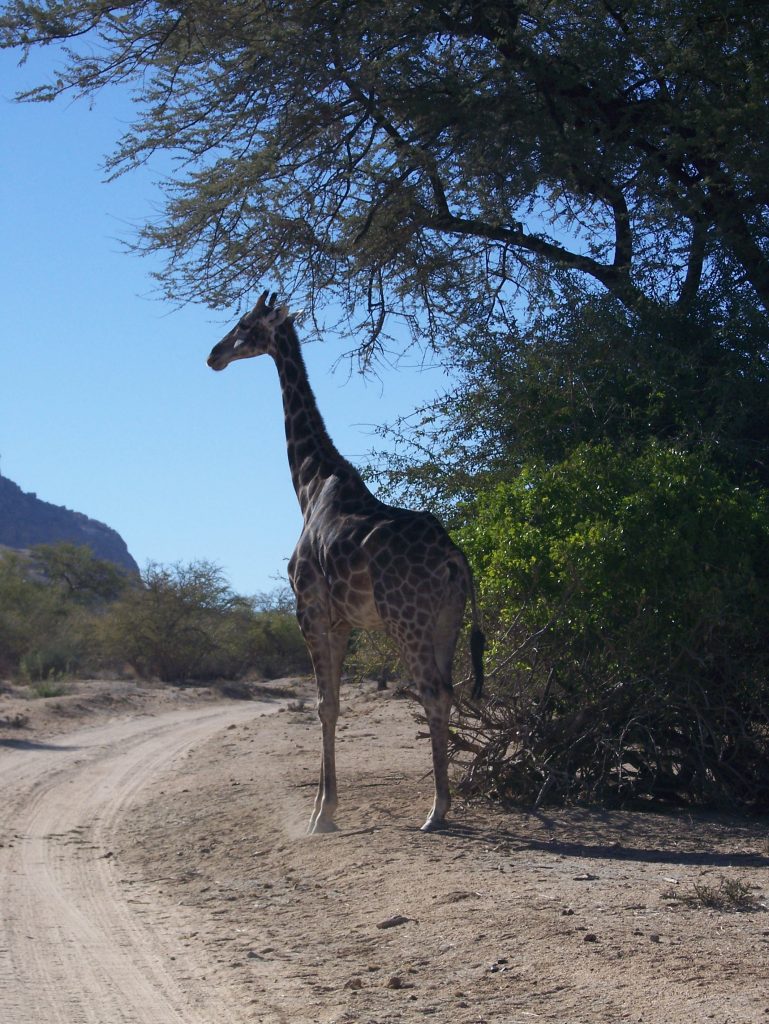 Wildlife at the base of the crag at Amieb Ranch, Namibia.

The Old Man of Hoy is always going to be ‘up there’ for any climber who has done it.  But the spectacular climbing and setting were only part of made this short trip with Dom, Paul O’Reilly and Jim Truman amazing – the relaxed and friendly welcome we received on both the Orkney mainland and Hoy itself also made this a magical experience – life really did seem to move at a slower pace there. 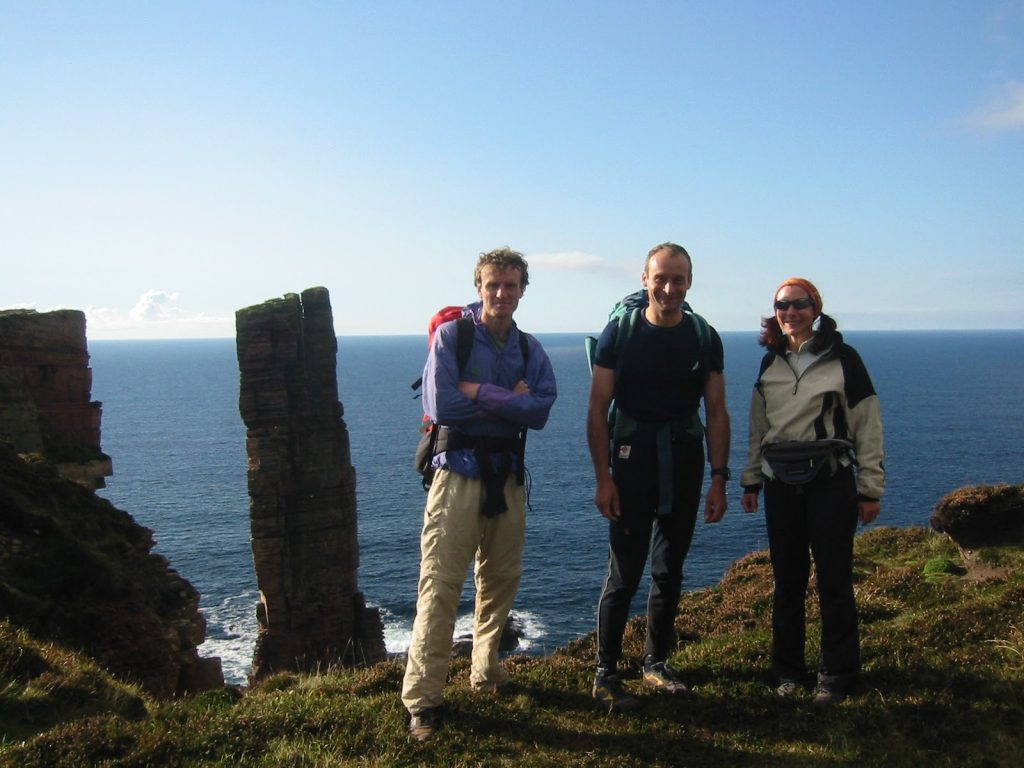 Over the last few years, Dom and I have visited many wonderful places.  Some of them particularly stand out, such as the fun, juggy sports climbing in the Red River Gorge, Kentucky; the shimmering landscapes of the Rio Grande in New Mexico; or Lleida, Cataluña, where the vultures circle around you so close that you hear (and almost feel) the rush of air through their wings.  But amongst many strong contenders, my favourite has perhaps been Leonidio, in Greece, offering sunshine, sea, a lifetime’s worth of rock, Europe’s nicest campsite (and we’ve been to quite a few!) and a lively and friendly ‘scene’.   And although I’ve climbed plenty of harder routes in the area, perhaps the standout route for me so far has been Mayor, a soaring and sustained 40m corner of steep orange rock.  I bottled out of leading it on our first trip to Leonidio in 2017, as it had a dangerously loose top section, but when we returned in 2019 the anchor had been moved to below the loose rock, and the route was mine to tick. 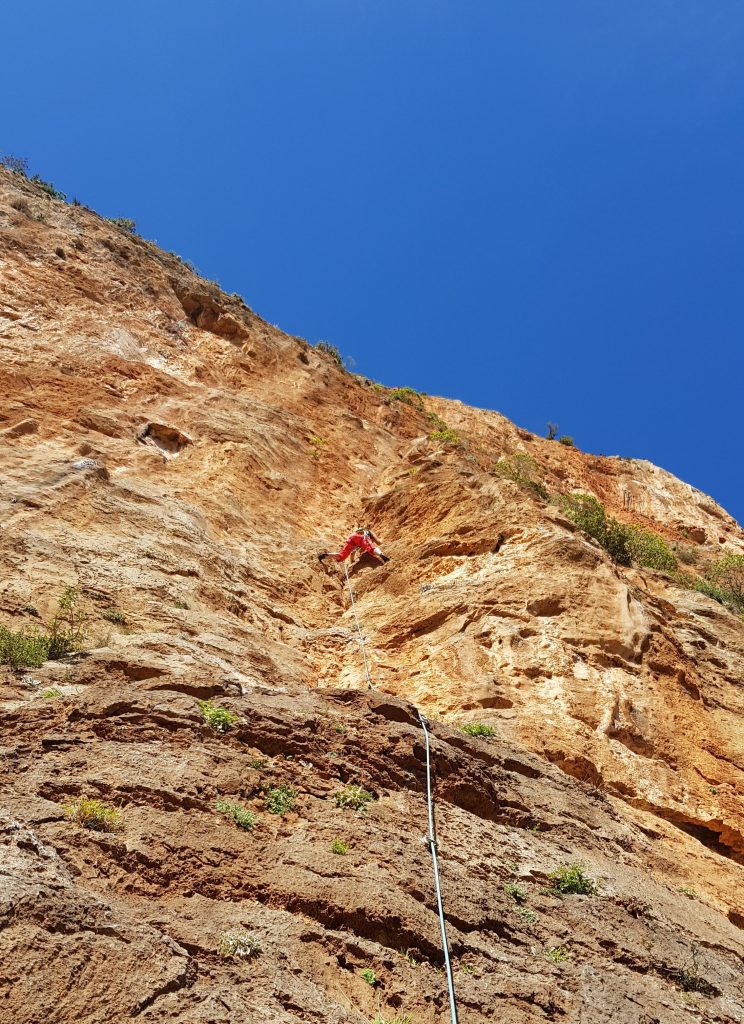 Kinder Scout in Lockdown is the most recent of my ‘memorable days’.  In April, Derbyshire police were discouraging people from driving to walking destinations, and I was hankering for my beloved Kinder.  After a couple of shorter walks in that direction I worked out a route that allowed me to walk to Kinder Downfall from my door.  It was a magical day; perfect weather, no traffic on the lanes between Broadbottom and Kinder, lambs playing in the fields, and lapwings circling overhead.  The sense of stealing back my own freedom was intense and joyful.

A good sense of humour is, for me, the most important factor for enjoyable companionship.  And for any challenging day on the hill, a partner should be safe, confident – and ideally just enough better than me to share similar objectives while being willing to lead the harder pitches!  Obviously Dom is my most regular partner, and he must be doing something right as we still climb together after nearly 40 years.  But usually he’ll be looking to climb a couple of grades harder than me, so some of my more memorable days have been with other people – including Debbie, Isabel, Raj and Tina amongst many other Rucksack Club members.

These days I’m lucky enough to have plenty of time to walk and climb.  But back in the days when I was teaching, raising a family and studying for a PhD… well, the answer is simple: sheer bloody-mindedness. 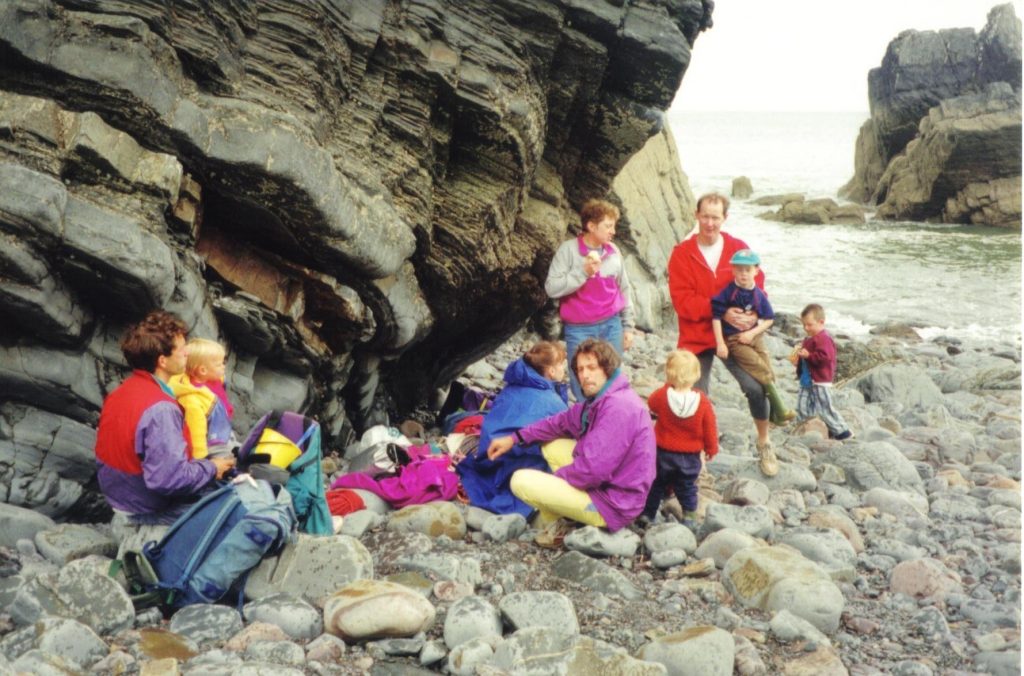 Bloody-minded family-cragging with Club friends and families at the Culm Coast meet, 1995

What is your dream ‘hill’ objective, and what future ‘hill’ plans do you have?

My objectives nowadays don’t really include major summits or climbing harder grades.  In fact perhaps my main objective is to keep climbing and walking, as well as possible, for as long as possible!

I’m also becoming increasingly committed to yoga, and in teaching yoga to help others as well as myself maintain flexibility, strength and balance for climbing throughout their lifetimes.  So if I have a “dream” objective, it might be to become an expert in teaching yoga for the older climber. 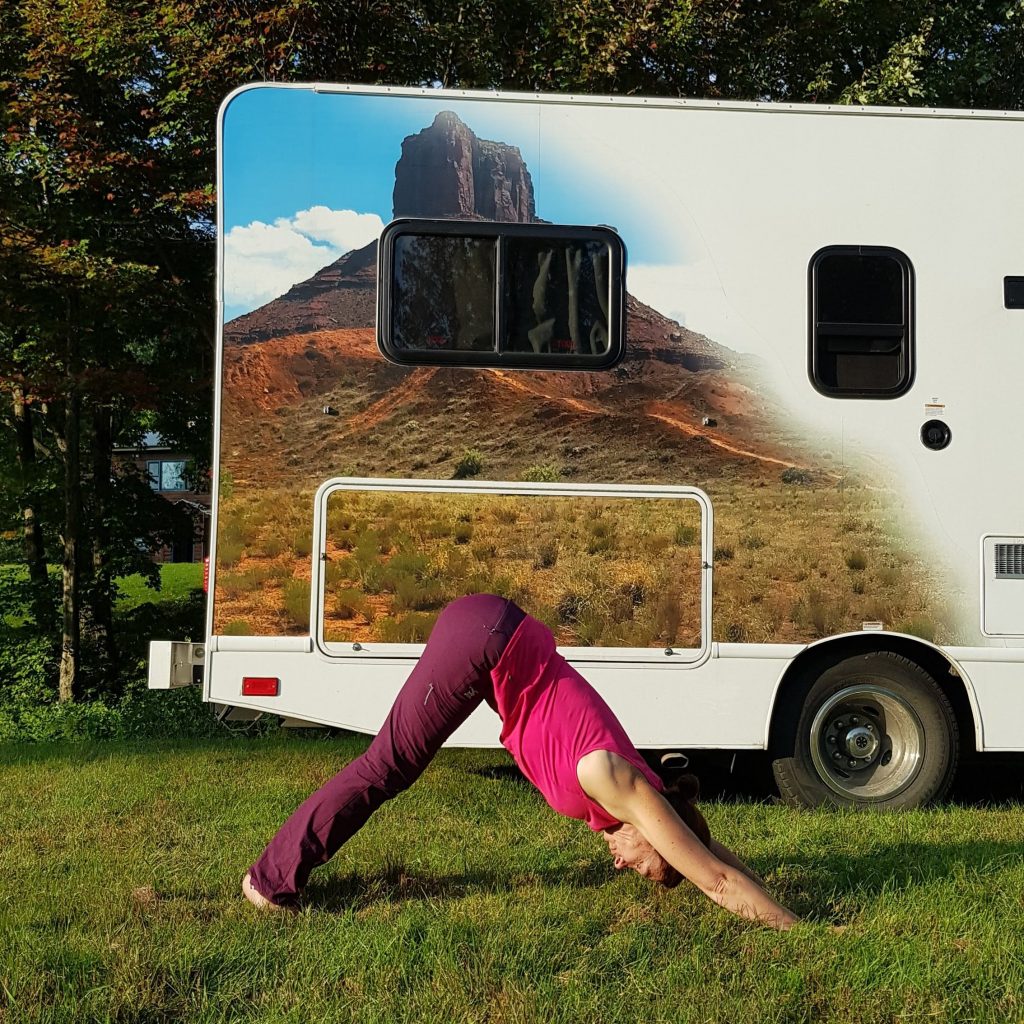 Our long term plans are to continue travelling and climbing as much as we can.  I don’t have any bucket-list destinations – but there are some new places I’d be interested in exploring, ranging from Iceland to South America; and many places I’d like continue visiting, like Spain, Greece, Croatia and the USA. For obvious reasons, our short-term plans are very uncertain, but as soon as easing restrictions allow, we’ll be off on our adventures again!

There have been lots of benefits of membership, but for me, a real-life saver for many years was the Wednesday evening climbing meets.  Dom and I had a series of regular babysitters booked on Wednesday evenings for over a decade, and it was our weekly chance to get out together in a child-free environment, and enjoy climbing, good company and a beer afterwards!