I climbed my first Munro, Ben Nevis in the Seventies when I was a teenager. My father dragged my brother and I up the tourist path on a hot, sunny summer’s day and I hated it!

A few years later I had warmed to the hills and enrolled on a BMC scrambling course on Skye staying at the Glen Brittle Memorial Hut. Of course, it rained all week but we had a fantastic instructor who among other things took me up Sgurr na h-Uamha (the true start/end of the ridge) after we had done Sgurr nan Gillean. The other guys on the course having retreated to the warmth and dry of the Sligachan Hotel. I was hooked!

Over the next couple of decades, Easter trips with my work colleagues from PA Technology and family holidays saw me amass 49 Munros. It was clear that I was never going to bag all 282 Munros but I had settled for visiting all parts of the Highlands and doing a sample of these hills. 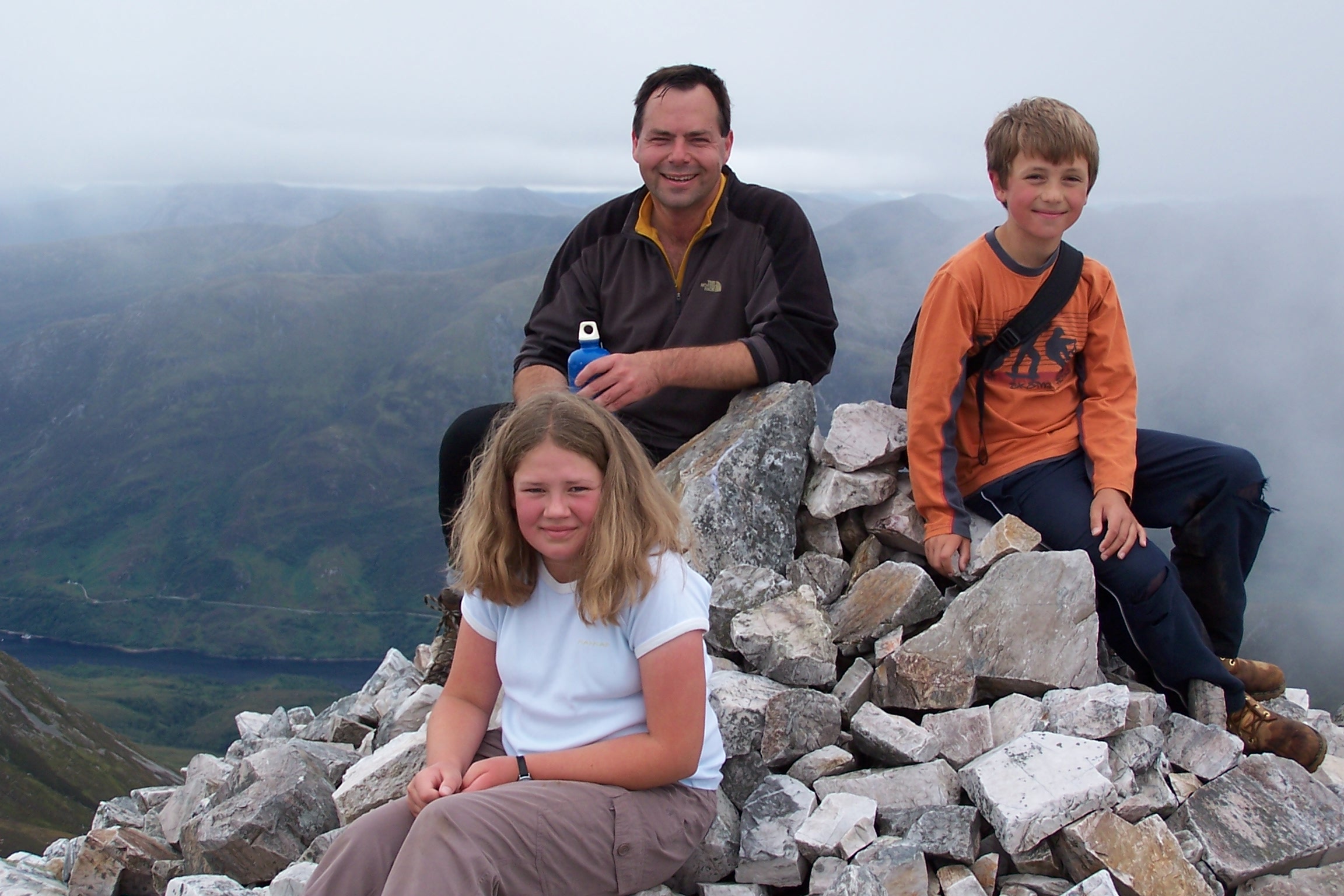 With Matthew and Louise on their first Munro, Stob Ban (Mamores)

In 2016, with the kids having finished at school in Wells, I decided to relocate from Somerset to the Highlands and fly down from Inverness to visit clients in London rather than getting the train up from Somerset. And the added incentive would be that my Munro Round would be on! I was 54 and set myself the target of finishing by the age of 60 or even sooner, as I reckoned one Munro a week was a reasonable target.

Living on the Dornoch Firth, I only have four Munros north of me. My strategy was going to be to work from north to south, choosing east or west depending on the weather.

That first winter (2016/17), my son and I started with Ben Hope, Klibreck and Conival all in appalling winter conditions. The weather was so bad on Conival that any thought of getting across to BMA had to be abandoned until the following year when I finally had a glorious bluebird day. 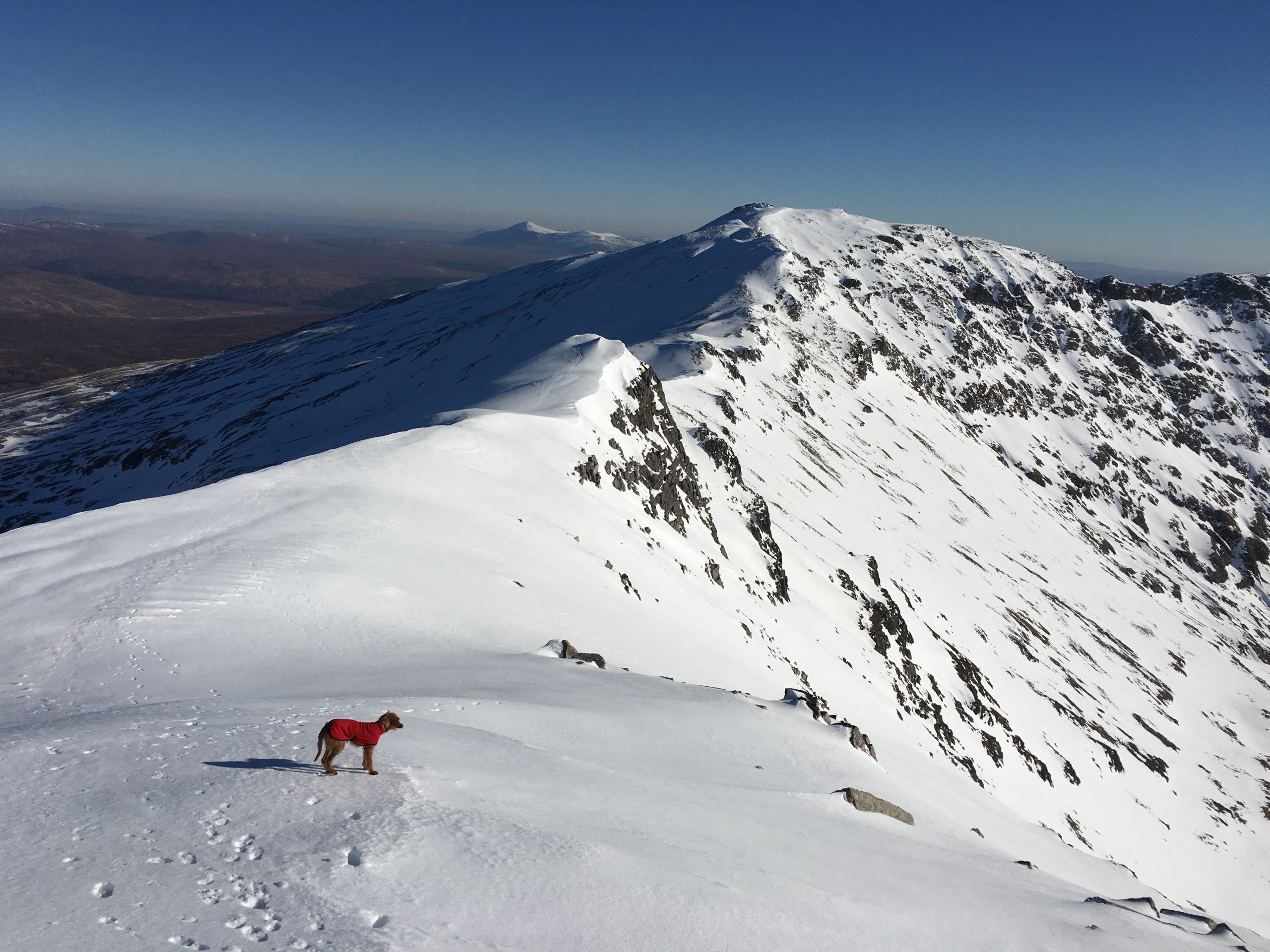 That first year I did all the Fannichs, the Beinn  Dearg group, the Monadhliath hills, the Drumochter hills, the remaining Cairngorm hills that I still had to finish, and the Lochnaggar hills. Plus lots of others in a blurr of hill bagging activity that I now struggle to remember without recourse to my photo logs.

I had two epic days doing the Fisher Field Munros. The first was a 12-hour day from Poolewe, cycling in as far as I could and then bagging Ruadh Stac Mhor and A’Mhaighdean. It rained all day and on my walk-out I found the way barred by swollen burns. I got very wet. The remaining three FF Munros were bagged in a 10-hour trip from Kinlochewe on a completely different day during a heatwave when all the burns were completely dry. 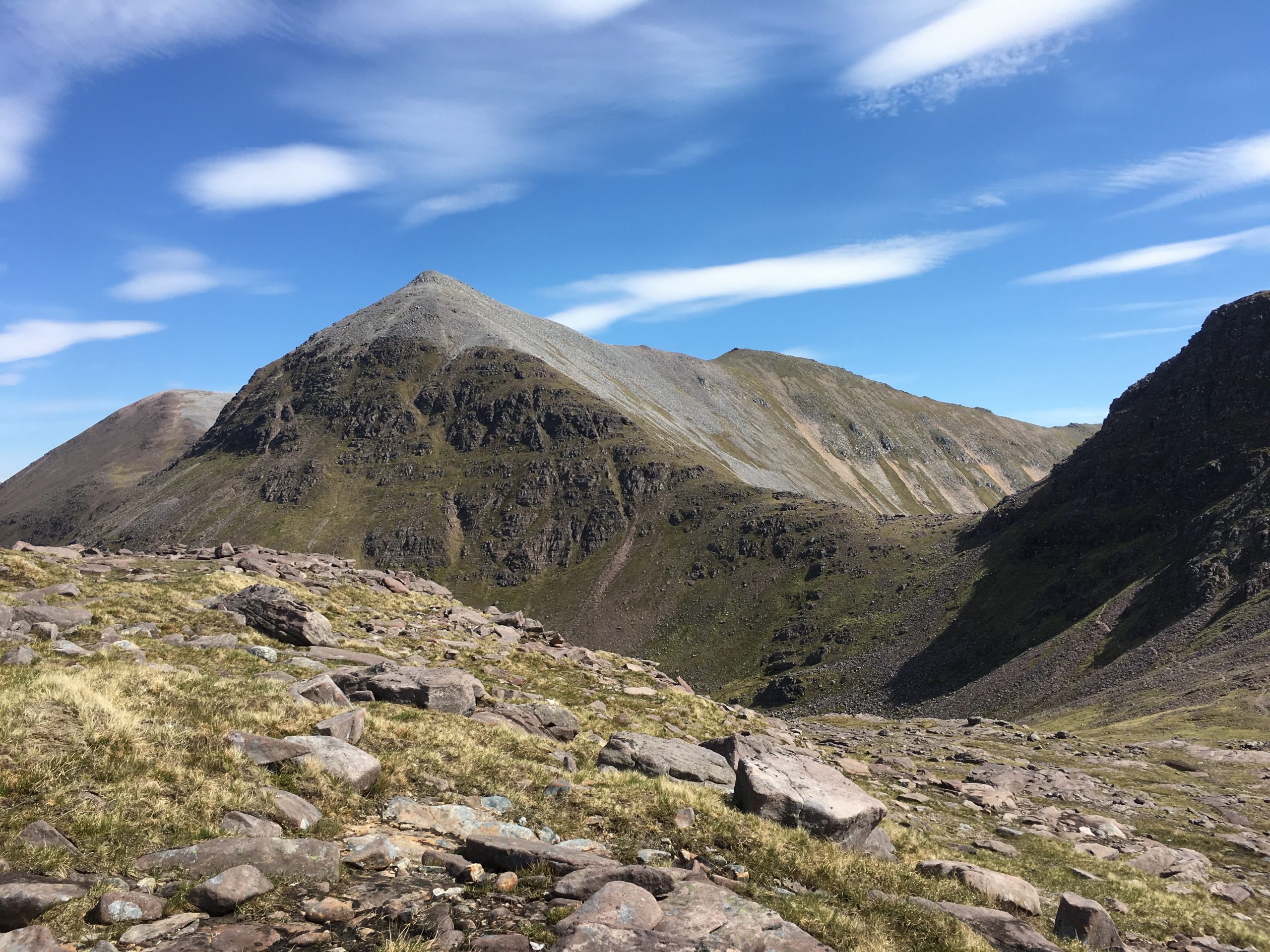 One of the benefits of doing the Munros from a base in the Highlands is that you can choose your hill days, especially as I work for myself and can take days off pretty much when I like. This means that for over 90% of my summits, I’ve had clear views. Unlike my trips up from England when 90% of the time the summits would be clagged in!

The longest period I have been grounded by weather was a six-week period one winter when the storms didn’t stop ragging.

Of course, the other thing to factor in when trying to keep to a one-Munro-a-week schedule is staying injury free. This I managed to do until January 2019, when I had taken my daughter up to Saileag on the Three Brothers’ Ridge in Kintail. Although there was only a springling of snow on the summit, it was very cold and everything was frozen. Descending from the Bealach an Lapain, I slipped on a patch of frozen turf just 100m from the carpark and badly twisted my ankle. It put me out of action for several weeks and even after that I could only climb the hills on painkillers. The injury took nine months to heal and even today it still twinges from time to time. 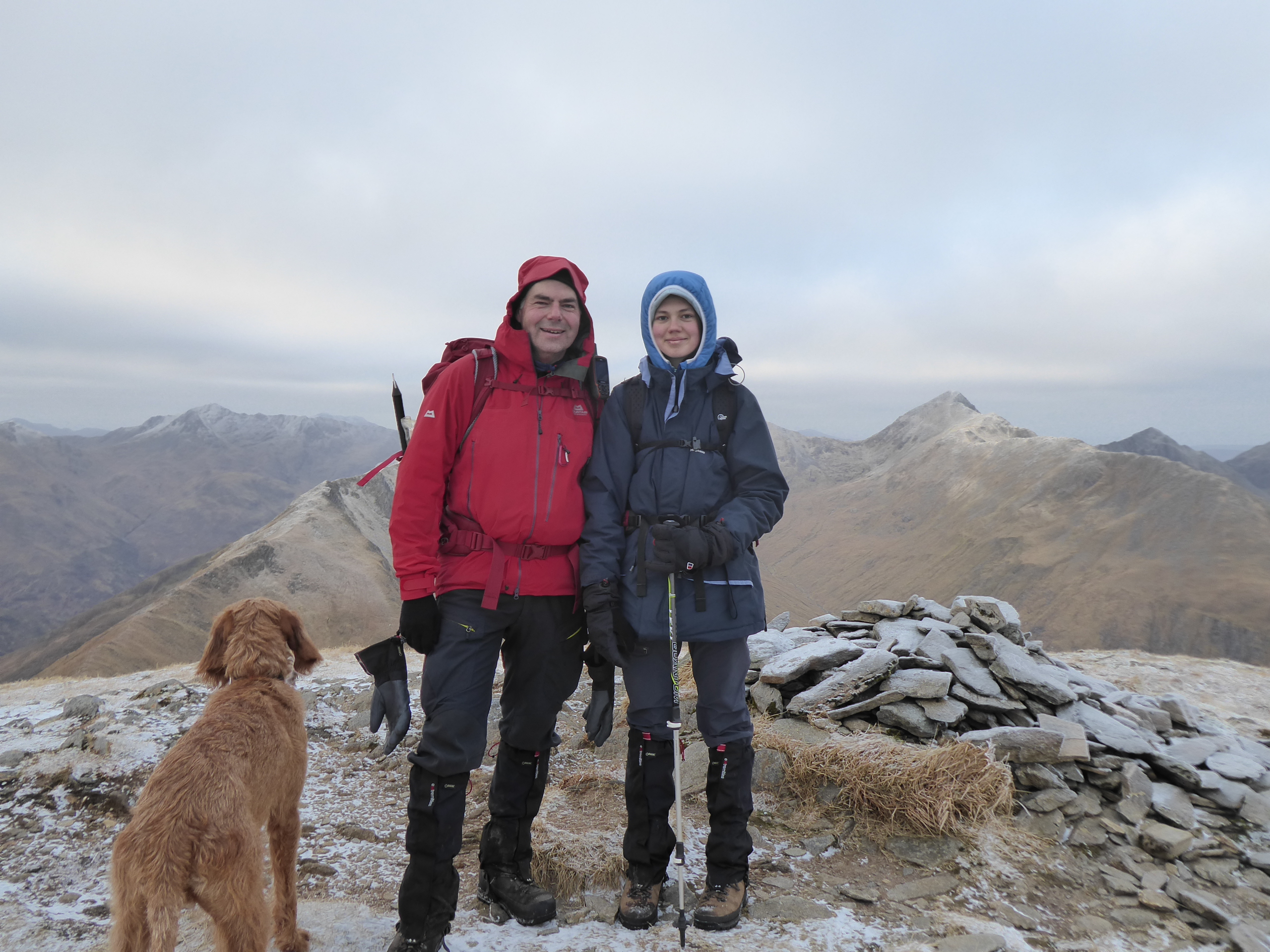 On Saileag with Louise, with the Five Sisters in the background

By 2019, I was beginning to think about the end of my round and had targeted September 2020 with a finish on the In Pinn. I was now having to travel longer distances south and also across to Skye. 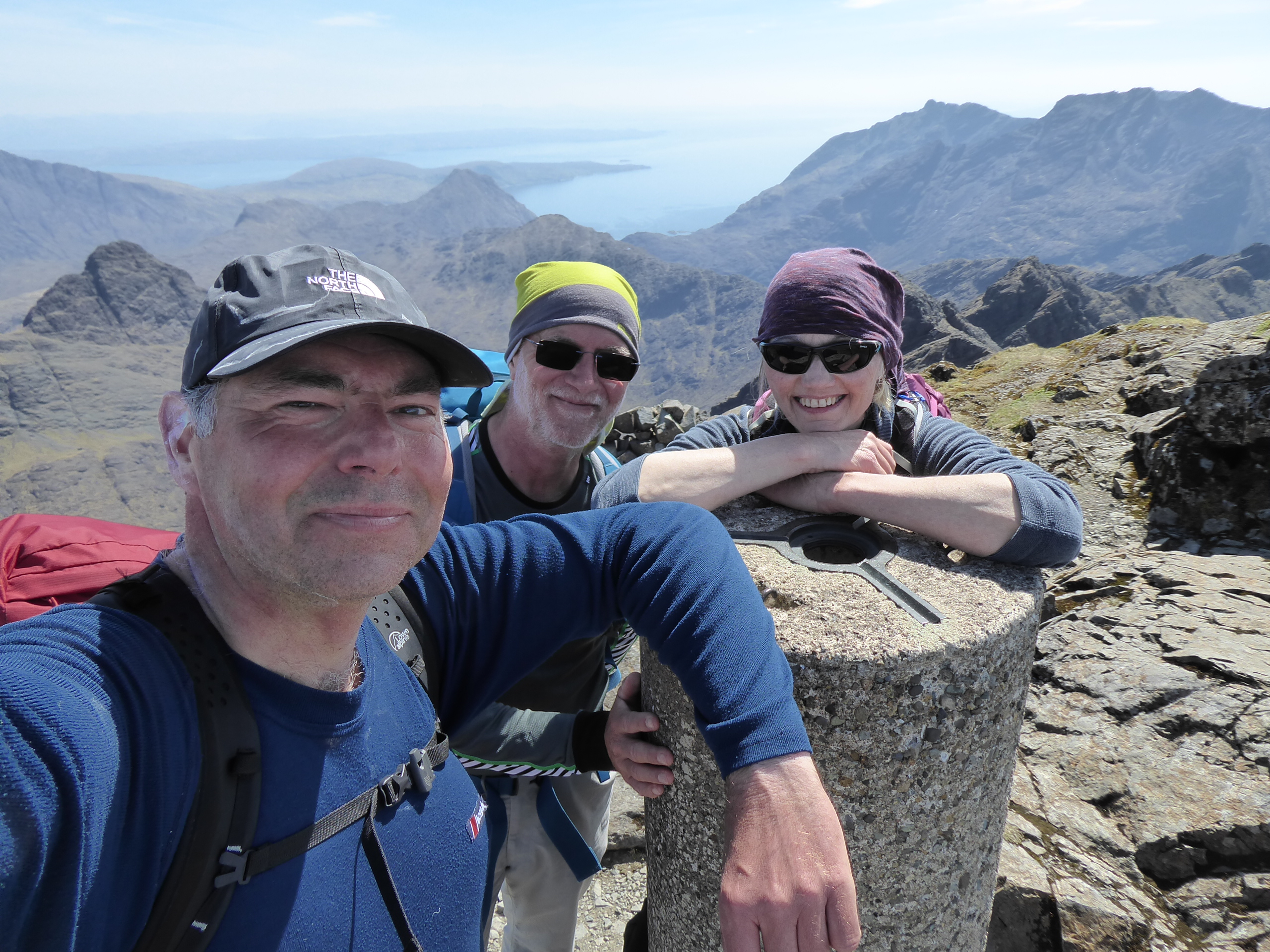 And then lockdown happened! My last Munro before we were shut in was Ben Lomond and my thoughts of finishing that year were seemingly dashed by the 5-mile rule! 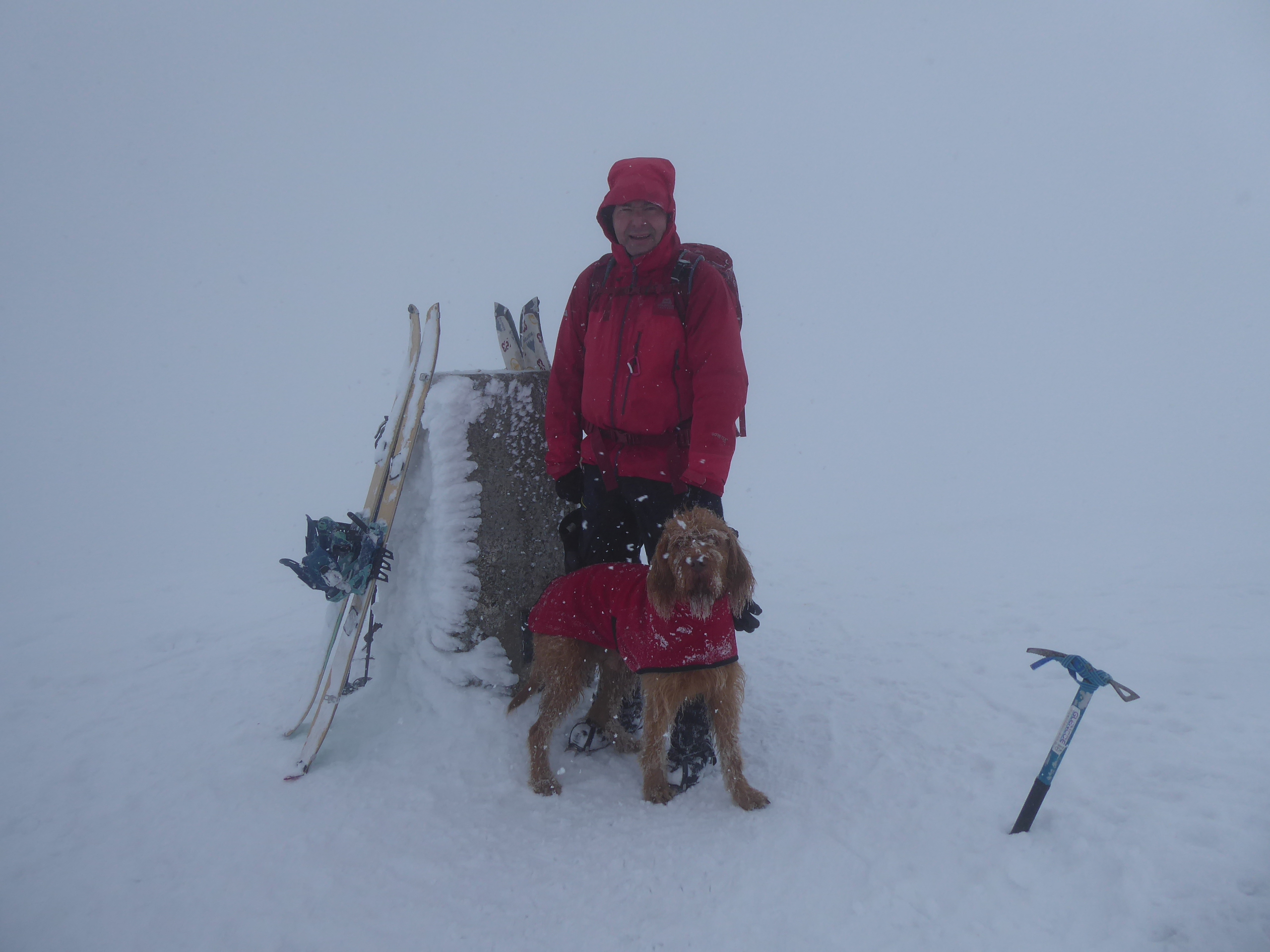 My last Munro before the first lockdown, Ben Lomond with Skye

Apart from two ‘illicit’ trips up nearby Ben Wyvis and Seana Bhraigh (which I had already bagged), I was restricted to plodding over local bumps and humps during the first lockdown.

With the easing of lockdown in June, I recalibrated and reckoned that if I really went for it I could do the remaining 30 odd Munros I had left by September. I was now travelling south for 3-4 days at a time and sleeping in the car to bag Munros in the Glen Etive area and around Crianlarich.

With just a handful to go, including the big three in Knoydart, I now had a deadline as my friend John had booked a cottage on Skye for the last week in September. He was going to take me up the In Pinn.

Things were now becoming very stressful as I constantly looked at weather forecasts and juggled mountains to fit everything in. One trip to Glen Etive to bag four Munros saw me only complete two, so a return trip the following week had to be arranged.

All the time the big three Munros in Knoydart were looming and in August we made the boat trip across to Barrisdale on a glorious day to bag these three remote hills. Instead of going straight up and down Ladhar Bheinn, we opted to do the horseshoe which took an exhausting 11 hours. There was no way we would get both Luinne Bheinn and Meall Buidhe done the next day before our return boat. So, a couple of weeks later we had to make another trip to Knoydart, this time from Mallaig to Inverie, to bag Meall Buidhe. 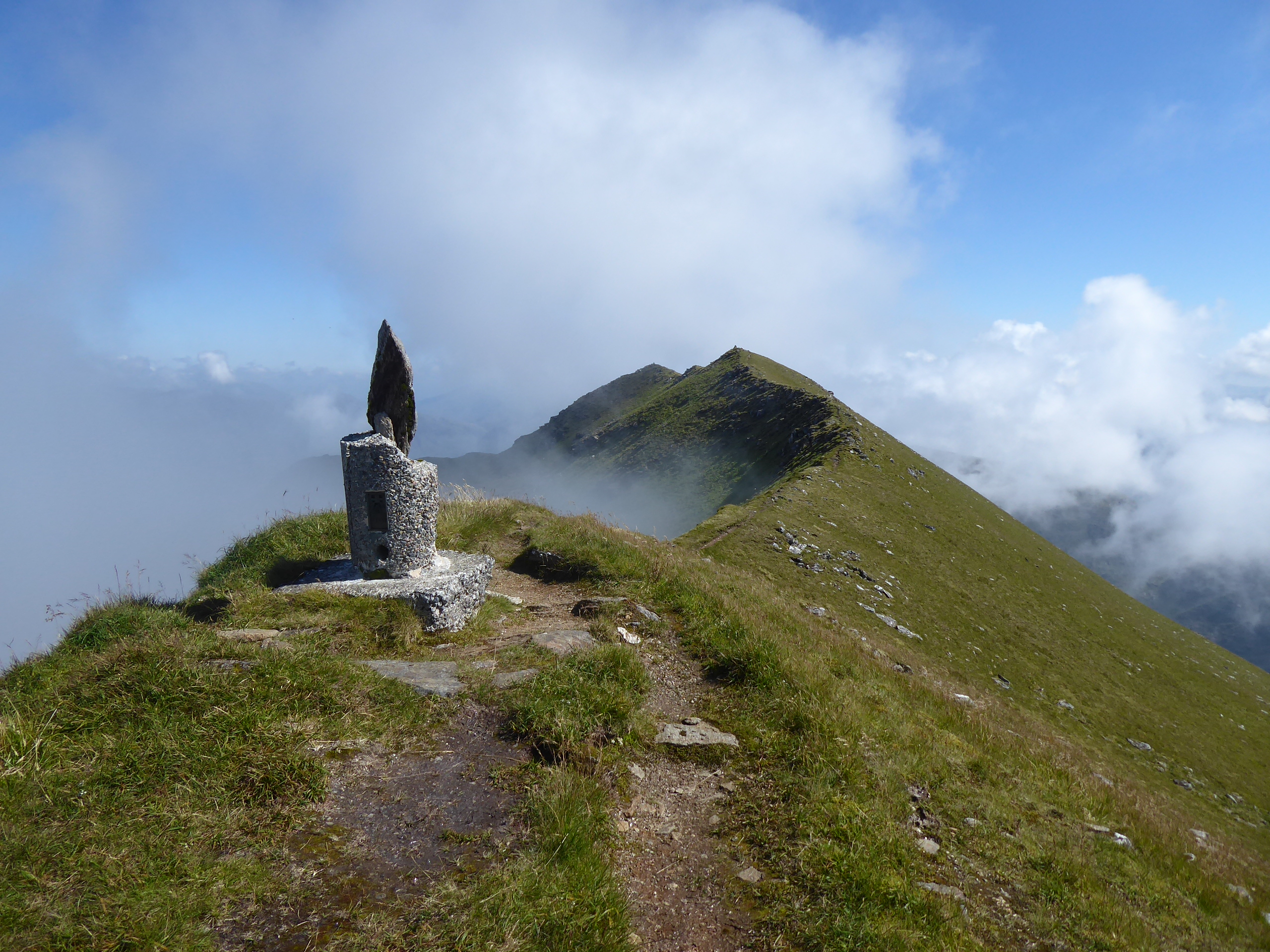 And then there were just two Munros to do! But the weather for the week the cottage was booked was looking dodgy, so with just 48 hrs notice I booked a guide, Malcy from Skye Guides.

When you plan your Munro Round finish, you dream of great weather and a memorable day. I got both. Perfectly clear skies with just a slight chill in the air. So, on 24 September 2020, I became the 6819th person to complete a round of the Munros. And when I finally got to the top of the In Pinn, having first bagged neighbouring Sgurr Mhic Choinnch, I don’t mind admitting to having slumped to the ground and shed a tear at the sheer relief of having finished.

I’d done my remaining 233 Munros in less than 4 years and before my 58th birthday. 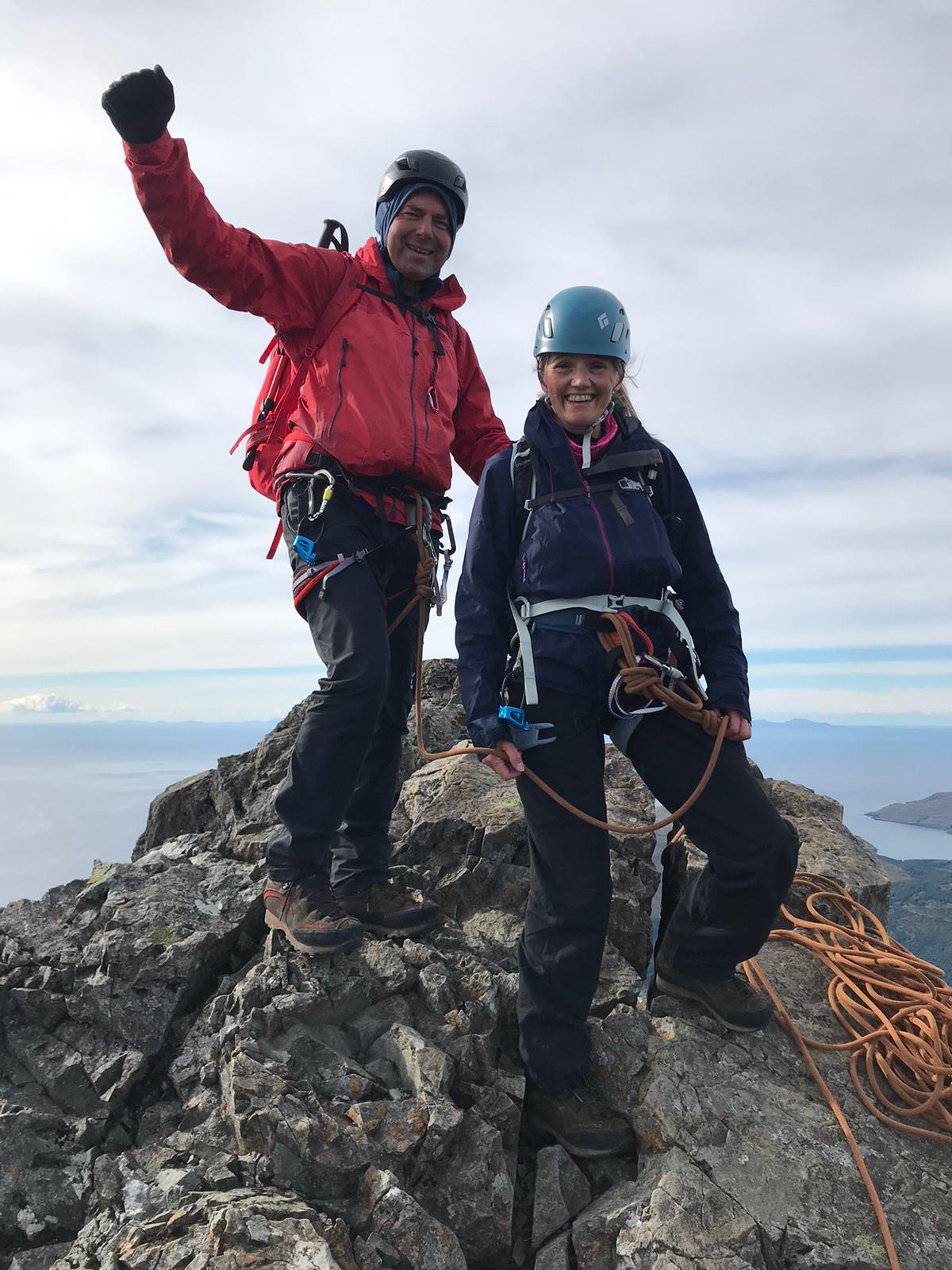 With Ellen-Ann on my final Munro, the In Pinn 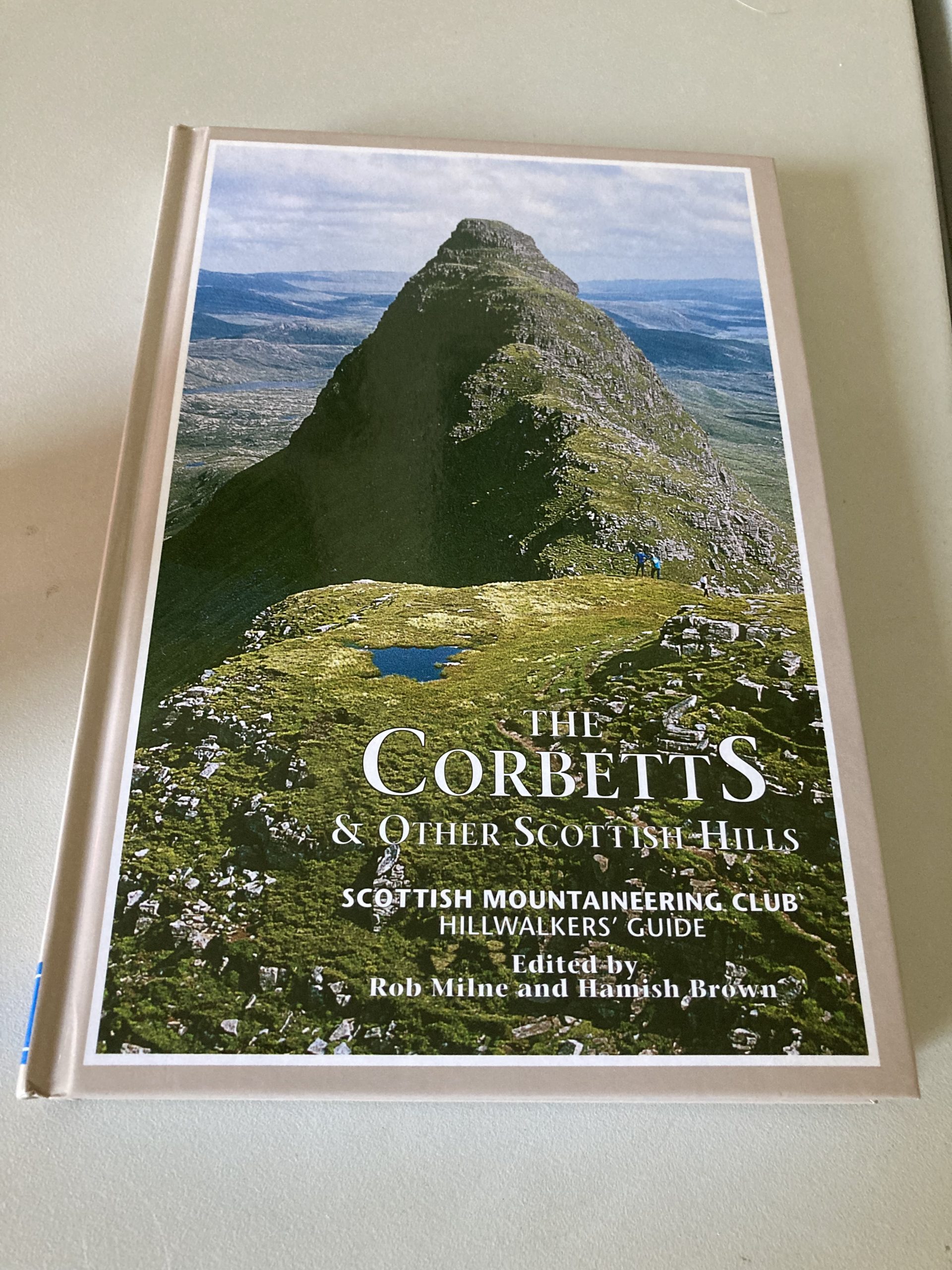