Many members have been very active over 2018…this is just a small Snap-shot of some of the things that have gone on over the year. For more pictures of these, and other activities, please visit ‘The 2018 year in pictures’ in the Gallery.

Mike Zeidan and Helen Pritchard kicked off the year with a 33hr double-double Marsden-Edale to join an elite band of Club members who have completed this feat of endurance of around Over the first weekend in January Mike Zeidan and Helen Pritchard completed a Marsden -Edale double- double, covering the 90 miles and 6000 metres in all variety of weather conditions. The first double was completed in under 12 hours so there was time for a break before joining the doublers as they started their night venture. The excellent support, good company and mountain hares stay in my memory the most…reportedly the doublers found it hard to keep up with them on their final leg!

Andy Llewellyn completed a long held ambition of completing a ‘circuit’ of the 100 highest Wainwrights’ within 5 days, accompanied by Helen Pritchard [yes, that lady again!], covering a distance of 167 miles and 57,000 ft of ascent.  They were blessed with the superb summer conditions, the only issues being excessive heat and total lack of water on the hills!  Great support ‘on the hill’ was provided by Club members Mike Zeidan, Julie Finn, Ben Llewellyn and Dave Woolley (all carrying mainly water!); Rob Ferguson and Jean Llewellyn providing invaluable valley support (food) for us all.

Paul Taylor completed the “Frog Graham Round”. Paul writes: Maybe I am as “mad as a box of frogs”…but it’s “off-fish-all“(!) I’ve got Frog’s legs now… after a long Frog march and some substantial swimming, I completed a successful Frog Graham Round to become a true frogman…the route, goes over Cumbrian fells and across lakes, with a bit of island hopping… without a croak! Find out more about this spectacular new Lakeland “classic” by visiting www.froggrahamround.co.uk.Also check outmy own website www.facebook.com/bearingup for all things Bearing Up!  It was all done in but-a-mere 18hrs 51mins (only half of which was in the drizzle, mist, dark or lake!) I was well and truly certified… when my membership of the Frog Role of Honour declared him to be number 41. Two photos below of Paul…on the journey! 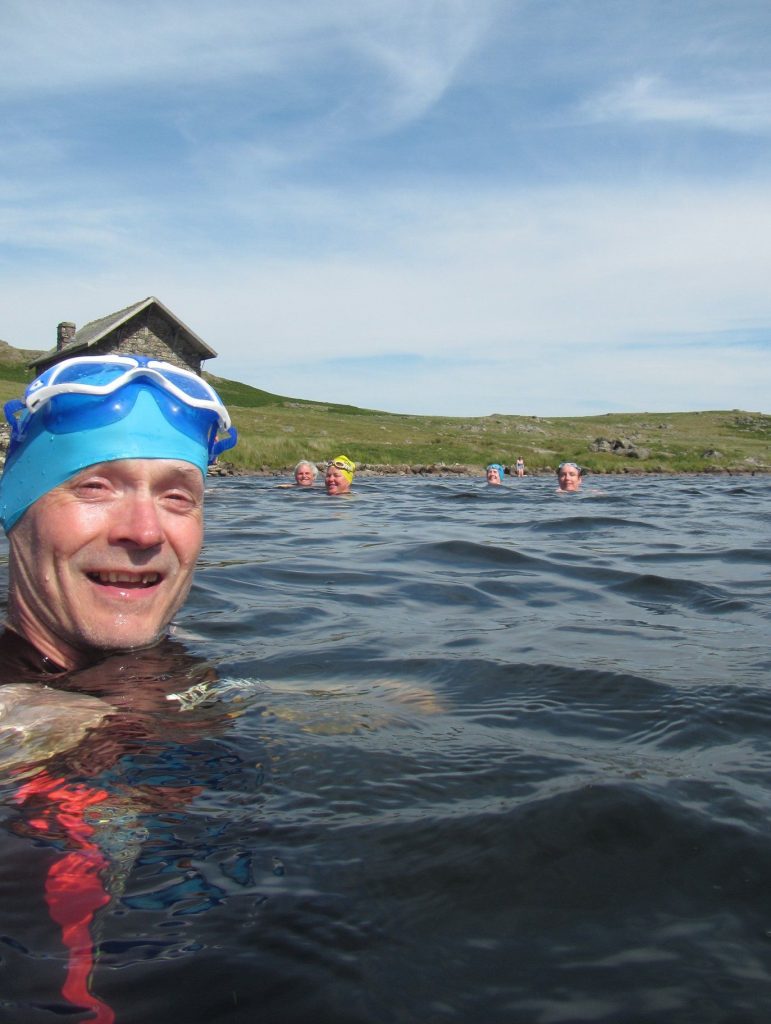 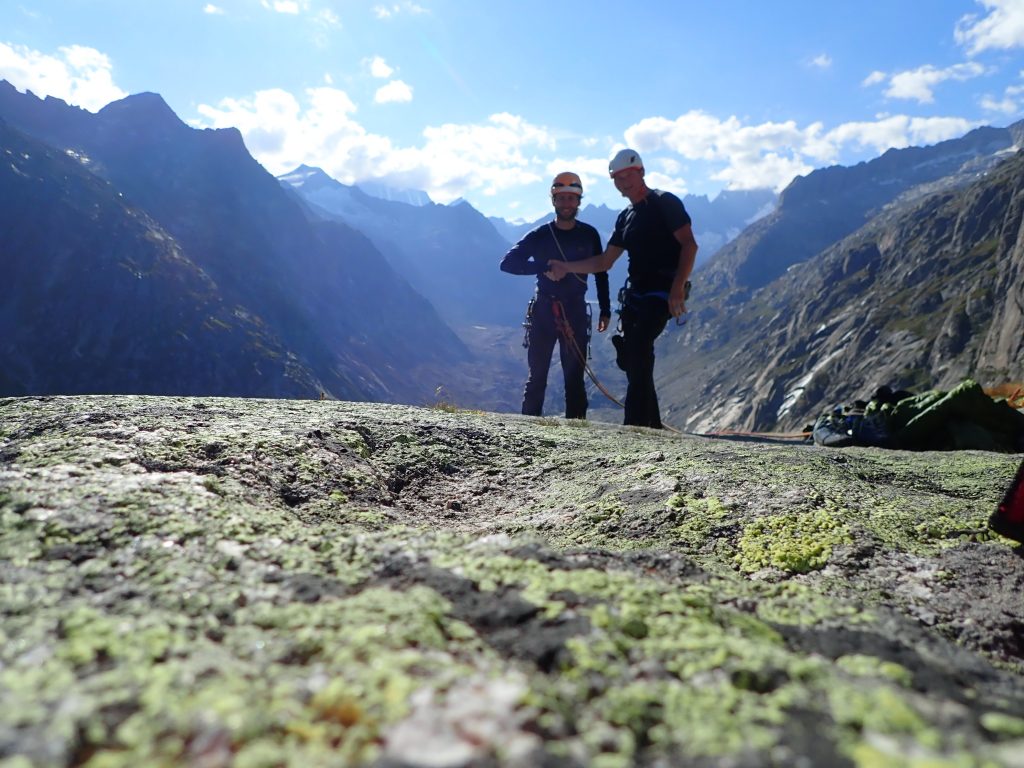 Dave Palmer had a very successful short trip to the Alps, a managed to include the NNE ridge of the Lenzspitze followed by the Nadelgrat…a classic trip!

Neil Sawyer had a very productive two week trip in the summer with AC members based in Randa, climbing seven 4000m peaks including the Weisshorn, Stecknadelhorn,           Dent Blanche, Dent d’Hérens, Holbärghorn and Dürrenhorn.

Jim Paxman completed the CCC [so called because it starts in Courmayeur in Italy, passes through Champex in Switzerland to finish at Chamonix] in August; it is more or less the second half of the much more well-known UTMB. The CCC is 101km with 6,100 metres of ascent. He finished 792nd out of 1,900 starters taking 22 hours 17 mins…great effort Jim on a classic ‘ultra’. One training run was a double “Kinder Dozen” [maybe the first person mad enough to have done so!]. An invention of Dark Peak Fell Runners, it involves reaching the Kinder Scout plateau 12 times and dropping back down into the surrounding valley, whilst circumnavigating the mountain and is about 35k with 3000m ascent…the double took Jim about 18hrs and he was accompanied by his long suffering dog.

Jake Oughton led his first E7 /6b,Yukan II, at Nesscliffe. It follows a tapering rib up a vertical wall, protected by a handful of pegs, supplemented by a couple of cams. After top rope inspection and some gentle ‘brushing’ [with a sock!], he top roped the clean route comfortably, and then repeated on the sharp end climbing smoothly up the wall in very fine style…so much so that his mum, Helen, was able to watch and take some photos!

Dom Oughton and Bill Deakin continued their big wall adventures with an ascent of North America Wall…the third route climbed on El Cap, but it represented a major step up in difficulty after The Nose and Salathe. Over five days they tackled 27 pitches (nearly all C2 and above with 8 of C3 and a final sting in the tail of maybe C4), over 3,000 ft of climbing with numerous tricky aid and logistical challenges, including numerous pendulums, following the devious, weaving line. If you want to read more check out the trip report at https://rockaroundtheworld.co.uk/2018/08/27/north-america-wall-trip- report/which includes plenty of pictures and videos. 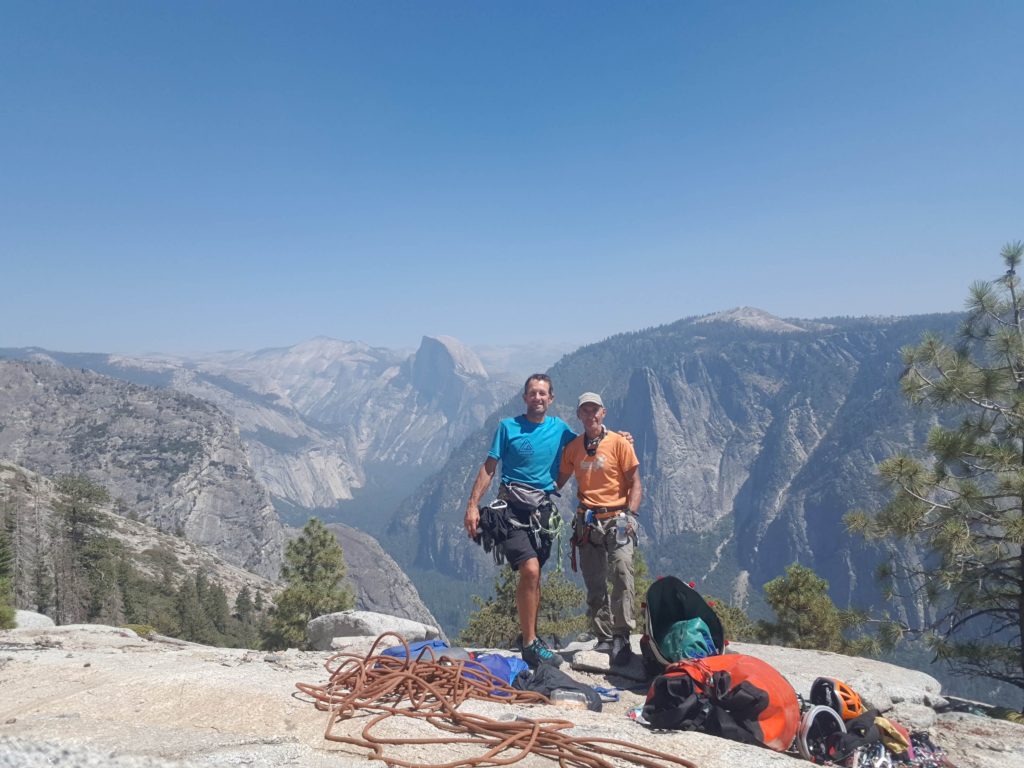 Ellie Bloodworth, along with boyfriend Arron, has spent much of 2018 travellingthe length and breadth of Europe, Asia and Oceania searching out great walking, surfing and climbing destinations…lucky them!

As ever, the much anticipated annual RC Journal will contain in-depth articles on some of the activities outlined above…it should be falling through letterboxes in late February.