Welcome to “On the hill with…” a series of short interviews with members of the Rucksack Club…this week it is the turn of Helen Pritchard…fell and long distance runner, mountaineer and new Committee member 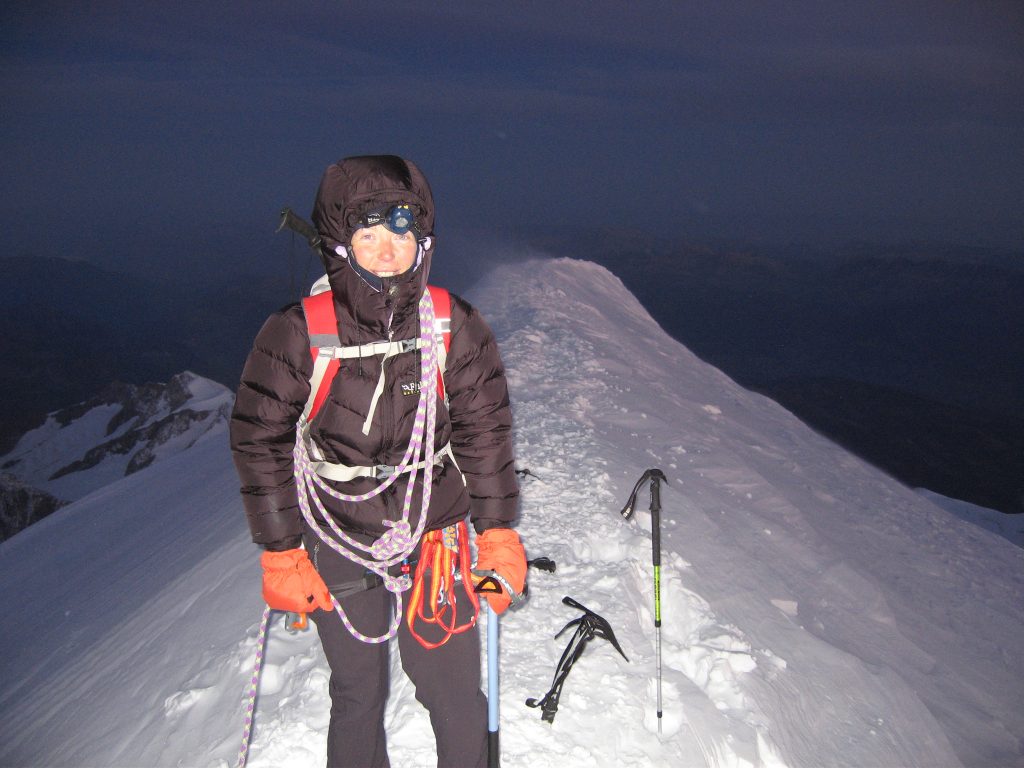 Helen on the summit of Mt Blanc

My parents took me for a walk up Yew Barrow when I was four years old and apparently I cried at the end as I didn’t want to finish and go home. I’ve always felt a need to be outside so I had a misspent youth walking, particularly in the Yorkshire Dales and Lake District. I always described myself as a hill walker with bits of running, climbing, cycling and swimming. I travelled and trekked abroad in my twenty’s. I had my daughter when I was thirty and didn’t have time to go walking all day but discovered that I could cover the same distance in less time if I ran! I started running with a couple of neighbours who did this odd thing called ‘fell running’. I was hooked and joined Pennine Fell Running Club. I realised quickly that I was not a fast runner but could keep going and ascend ok so started entering long distance events in the UK and abroad. I still see myself as a hill walker who is having a blip of running. I appreciate how lucky I am every time I run.

I’ve had to think about this question. I’ve read lots of books about the most amazing physical achievements but usually their life is so far removed from mine I admire them but it doesn’t particularly inspire or influence me. It’s not the achievement itself that influences or inspires me but rather the personal situation that a person is in when they achieve something.

My first Rucksack Club meet was the double Marsden-Edale in 2007. I didn’t really know about the Club but was invited to attend the double and thought ‘why not?’ I joined in 2009.

It depends on how I feel, so sometimes I love the company of friends, other times I crave solitude. I love challenging weather of wind/mist/snow but a calm sunny day also makes my heart sing. I always feel privileged to see some wildlife while I’m out whether it be a deer or to hear a woodpecker. A short run can be as exhilarating as a full day out. Paths from home can be as perfect as new routes. 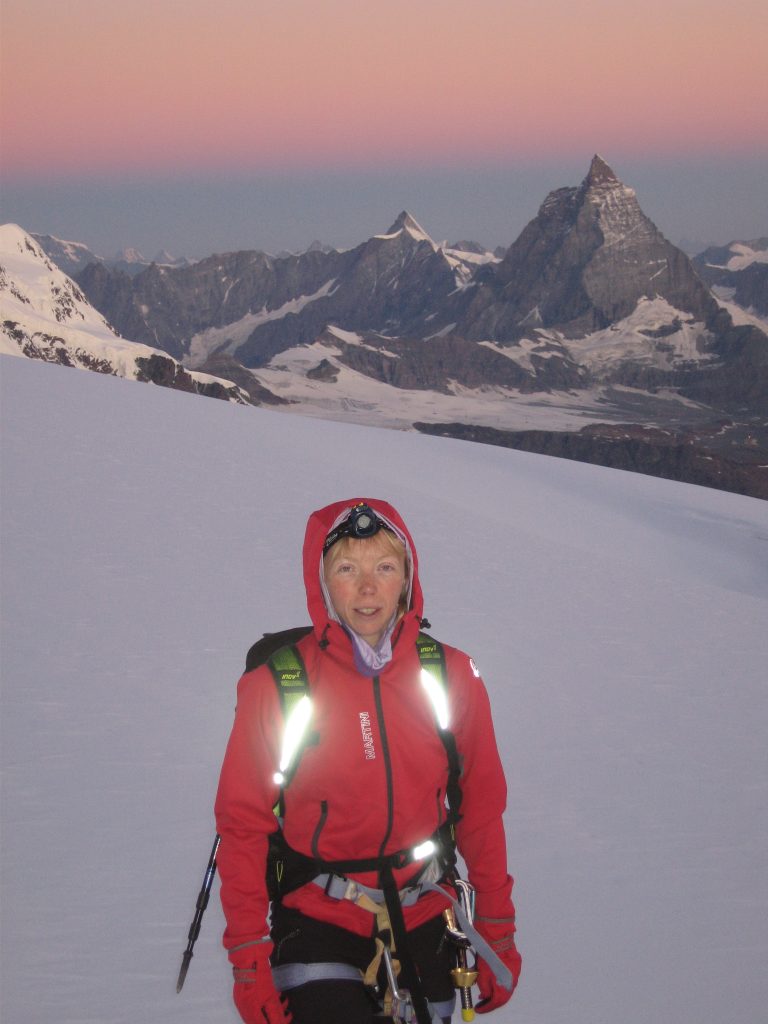 Helen on the Dufourspitze

What has been your worst mishap in the ‘hills’?

My saddest day was at the Ian Hodgson Mountain Relays in 2012. It’s one of the largest fell running events with 50+ clubs entering teams of 8 that run in pairs over the fells around Patterdale. Our teams were high up in the field, particularly the Open men’s. We were all waiting in the field for the last leg runners to return. We started seeing other teams finish then a rumour spread that a runner had collapsed… another rumour that it was a Pennine runner. We saw the police helicopter then air ambulance fly over Helvellyn. My friend Darren Holloway (Daz H) never returned. He wouldn’t of known what happened. He was 42 and his last memory would have been doing what he loved with all his heart. Daz had a blog and his last entry 3 days before he passed read ‘so many things to do and so little time’.

What has been your best ever day on the hills?

Not exactly a day in the sense of 24hrs but it has to be the ultra tour de Mont Blanc [UTMB]. I stood on the start line feeling very intimidated in a sea of super fit tanned continentals, focussing on my usual race strategy…let’s see how this goes! [see 2011 Journal article] 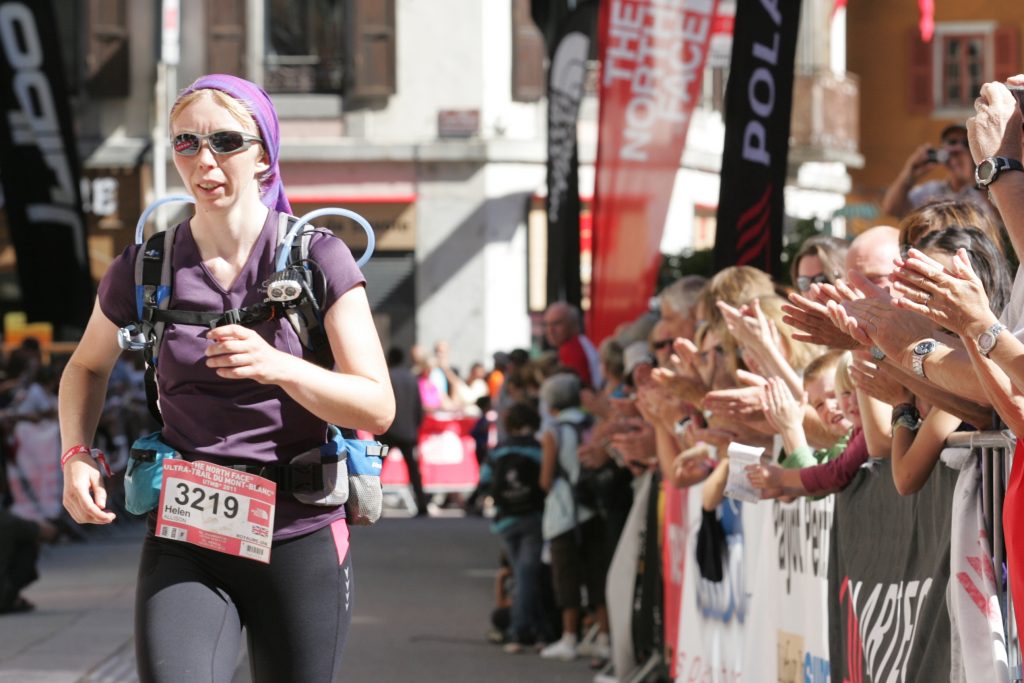 Helen at the UTMB

My husband says I’ve got to say him…but actually it’s my doggy. 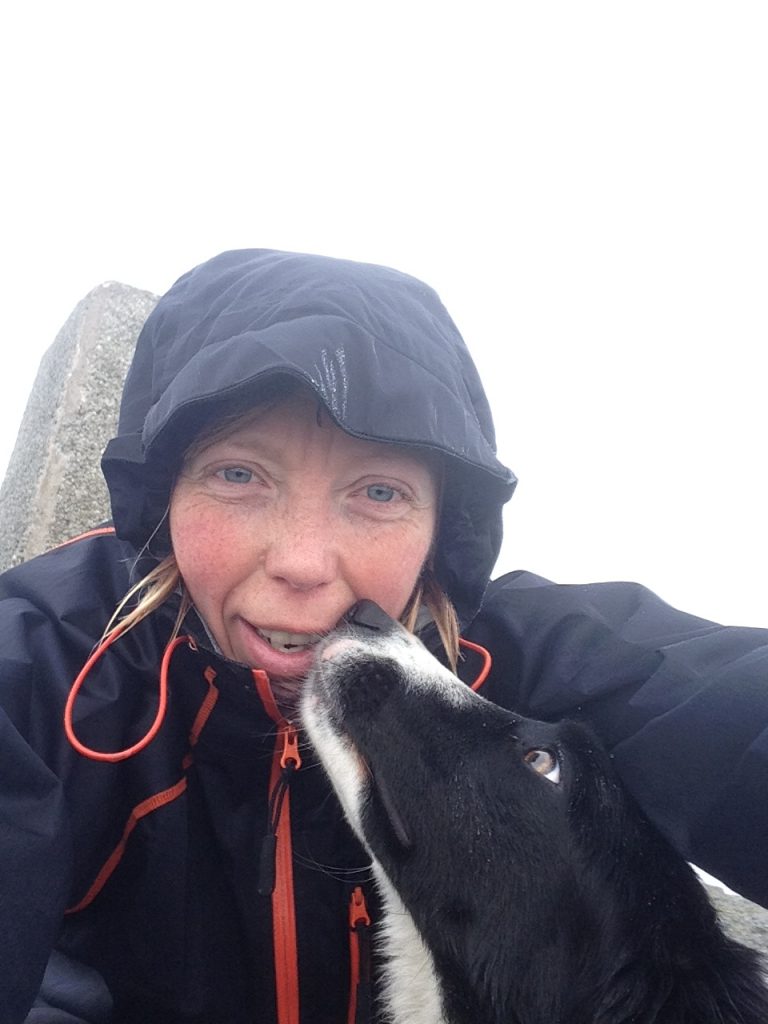 Helen out with her “doggy” Pip

Lists! Lots of organisation, determination, juggling…and lists. Particularly when my daughter was younger, support from Rae and other friends and 5am runs. For several years I walked the night section from Edale to Marsden to then be met by Rae and Katy in the car. Rae then walked the day section and I spent the day trying to stay awake. Several long walks were split in this way. Katy seemed to think it very exciting. I’ll never forget being met at 6.30am in Marsden by a delighted 4 year old who couldn’t wait to tell me that for breakfast she had a crunchie bar. I only once, many years ago, decided to try following an actual training programme. All went well until day four when Katy got chickenpox so my speed session became cuddles and chamomile lotion. I’ve had to pretend to patients that things couldn’t be better as I tried not to limp from stitches in my knee or recovering from blisters. I often run to places and events so friends have just got used to me looking a little bedraggled. I’ve spent many days with muddy legs under respectable looking clothes, as there really wasn’t time for a shower until later!

This year I’m looking forwards to the walkers Haute route with Rae and a 4 day multi stage race of the tour de Monte Rosa. This is all assuming I survive the High Peak Marathon with the Rucksack club team.  I started open water swimming last year so can’t wait for the water to start warming up.

Where to begin? When I joined I had no real expectations and over the few years I’ve been involved the Club has kind of grown on me. I’ve really enjoyed spending time with the members I’ve met and had adventures with… well most of them! I’ve gained skills and experiences along the way. It’s opened up new opportunities. High Moss has particularly special memories of times shared. I associate Rucksack Club meets with friendly faces and laughter. I know the Club is steeped in history which gives a grounded feeling but to me it’s the here and now and the future that offers opportunities to make more happy and magic memories.