Continuing our occasional series of “On the hill with…” interviews with Club members, it is the turn of Vice President Brian Cunningham…a life time of adventure and still ‘getting out there’.

I was born and brought up in Portrush, on the North Coast of Ireland. When I was seventeen I bought an early nylon climbing rope and, along with a mate, prowled around the coastal cliffs looking for lines. Some of the places where we did early routes now have full climbing guides – Fair Head and Ramore Head in particular. The other day I noticed a Youtube video of Alex Honnold doing a free solo ascent of one of the hardest routes on Fair Head…though not one we put up!

Lionel Terray. His book ‘Conquistadors of the Useless’ triggered my lifelong love of the mountains.

I was a keen runner, however the thing I seemed to be best at was the seriously long stuff where keeping going is all that matters. In my fifties I spent years trying to do a continuous solo run from the Glenfinnan Monument to Cape Wrath – it’s about 200 miles. This bold ambition grew out of a couple of successful hundred mile runs but in six full-on attempts I never made it past halfway. In the search for a ‘silver bullet’ I contacted Mike Cudahy and who introduced me to the Club – which, by the way, I’d never heard of prior to joining.

Over a lifetime of outdoor adventure, what have been the most memorable times?

As a student, hiking and climbing in the main Alpine groups from Innsbruck to Chamonix and, on another occasion, a wonderful fortnight climbing in the Bernina group. A trip in 1972 with three friends crossing the Vatnajokull Icecap in Iceland was memorable…we designed and built our own sledges and the navigation was hairy, with compass deviation of up to forty degrees! 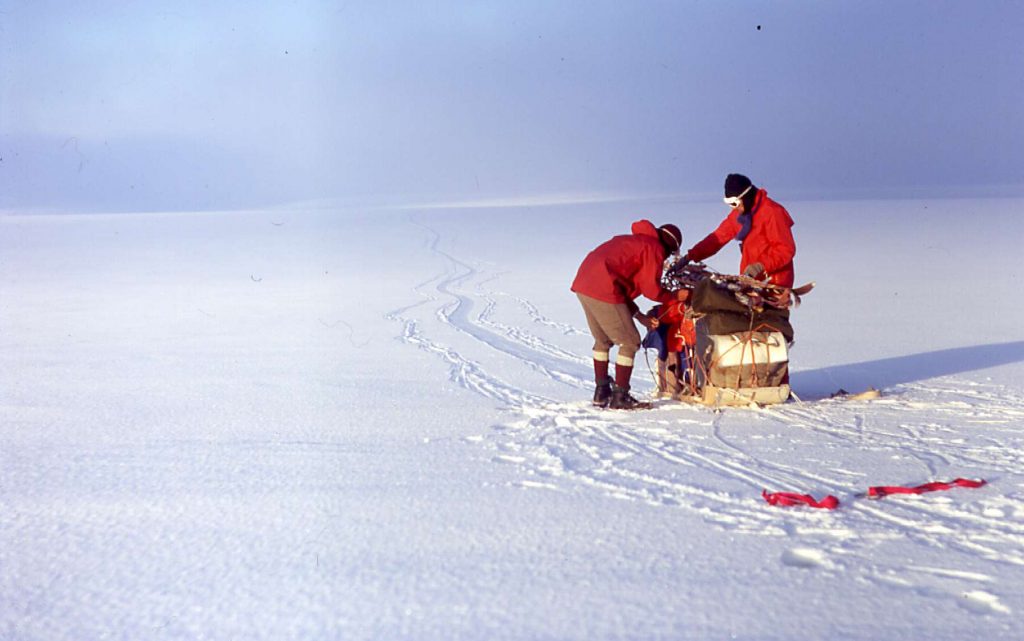 In 1977 I sailed to, and made the 3rd ascent of, Rockall with three friends [2008 Journal article]…this was long before GPS, so finding a 60ft high, 60ft across piece of rock 250 miles out in the Atlantic was challenging to say the least! In the 80s was ice climbing in Scotland, mostly on the Ben…I was fortunate to fall in with a group of brilliant climbers who mostly led/hauled me up some spectacular ice routes including a half dozen Grade Vs. Over eight wonderful days in 1999 I traversed the Auyulttuq Pass with my wife Christine…I then decided to run the trek the following year with a friend. We completed it in 19hrs and, as far as I know, this remains the only sub-24hr traverse. 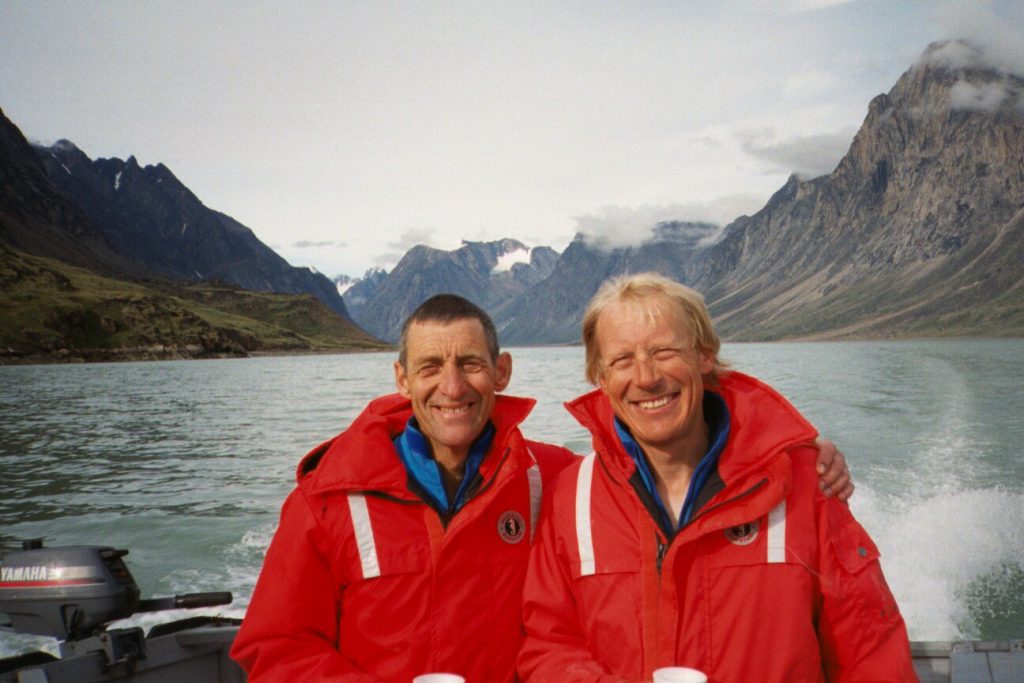 In 2003 I did the John Muir Trail with Christine…this has to rank as the best thing I’ve ever done, with 3 weeks of the most stunning scenery imaginable [2003&2004 Journal article]. 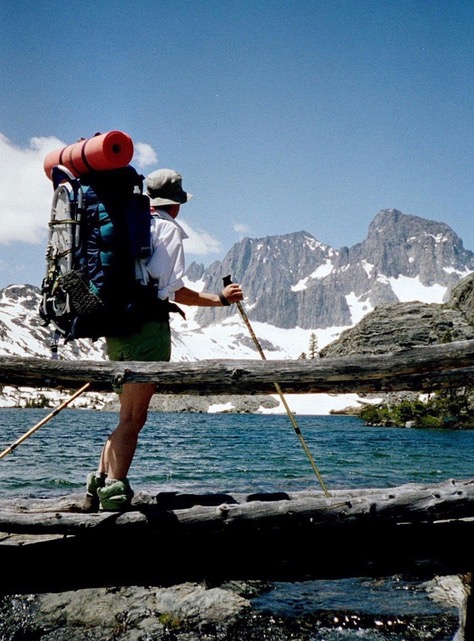 Cycling the length of Norway [Stavanger to Nordcapp] with Club legend John Richardson in 2009 was another special trip [2009 Journal article, by John Richardson]…oh, and I’ve always loved anything wind powered too, having sailed from an early age. An extension of this is kiting with great trips to the Antarctic [2003&2004 Journal article] and Gobi Desert [first crossing 2004 [2005 Journal article]]…in 2016 I got my paragliding pilots licence and wish I’d started years ago!

Only one springs to mind – I was doing a winter traverse of the Cir Mhor ridge on Arran with a mate and after having difficulties on the Mauvais Pas, which was iced up, my mate had a go and slid off.  Fortunately, I was ready for the fall and was able to hold what might otherwise have been a serious incident. We completed the route and then, ironically, I sprained my ankle badly on the kerb while running from the pub to catch the Ardrossan ferry.

After watching a video of a lad hiking up Suilven and paragliding back to his car, I sold my motorbike, took up paragliding and got my club pilot licence in Switzerland a couple of years ago [2016 Journal article].  Unfortunately, it doesn’t look like this particular ‘hill’ dream will come true – getting a bit old now, I was seventy-six in February.

I’ve been fortunate to have had some really great ‘hill’ partners over the years. If I was to pick the qualities I admire most in a partner it is self-sufficiency and competence. Trust is the key but having a good sense of humour also helps a lot! The Rucksack Club is full of people like this.

Regular runs on the South Pennine Moors and the occasional mountain bike outing.

After completing a 75@75 last year [2018 Journal article], I still have vague hopes that I might just manage an 80@80, but that’s probably highly unlikely.

Are you kidding? Far too many to list but I suppose being becalmed at the South Pole on the IceKites expedition was a major missed opportunity. I’ve been very fortunate to do lots of interesting things across a wide variety of sports and in a lot of interesting places around the world, but of course there are many more things I’d like to have done. Having said that I don’t feel as if I’ve wasted my time so I don’t have too many regrets. 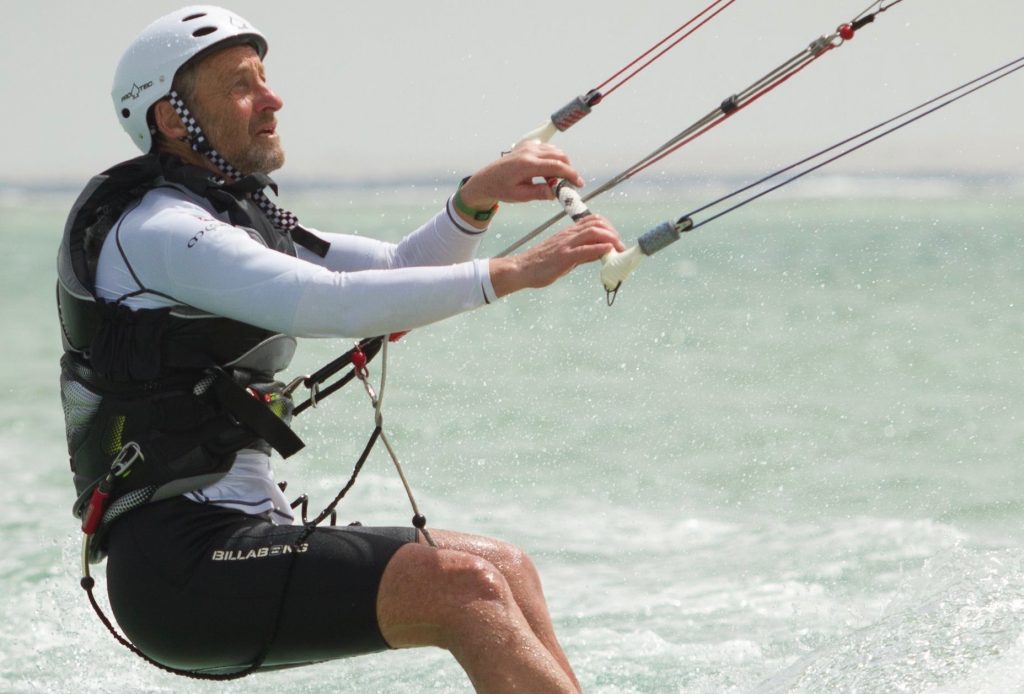 Brian kitesurfing…one of the many activities he enjoys!

Without any doubt, inspiration, from some of the Club legends like John Richardson, with whom I’ve shared some amazing cycling adventures including our swan-song Nordcap spin ten years ago. Then there were a couple of Vets victories in the High Peaks Marathon with other Club legends, Geoff Bell, Paul Murray, John Crummett, Edwin Coope and Andy Howie. I also had four good years as Journal Editor, working with other outstanding Club members, Roger Booth and John Payne. The list goes on and on. Joining the Rucksack Club has kept me going.