“On the hill with…” a series of short interviews with members of the Rucksack Club continues this week with another Past President, John Llewellyn [1984/85] who has been a very active and influential member of the Club for over 60 years. 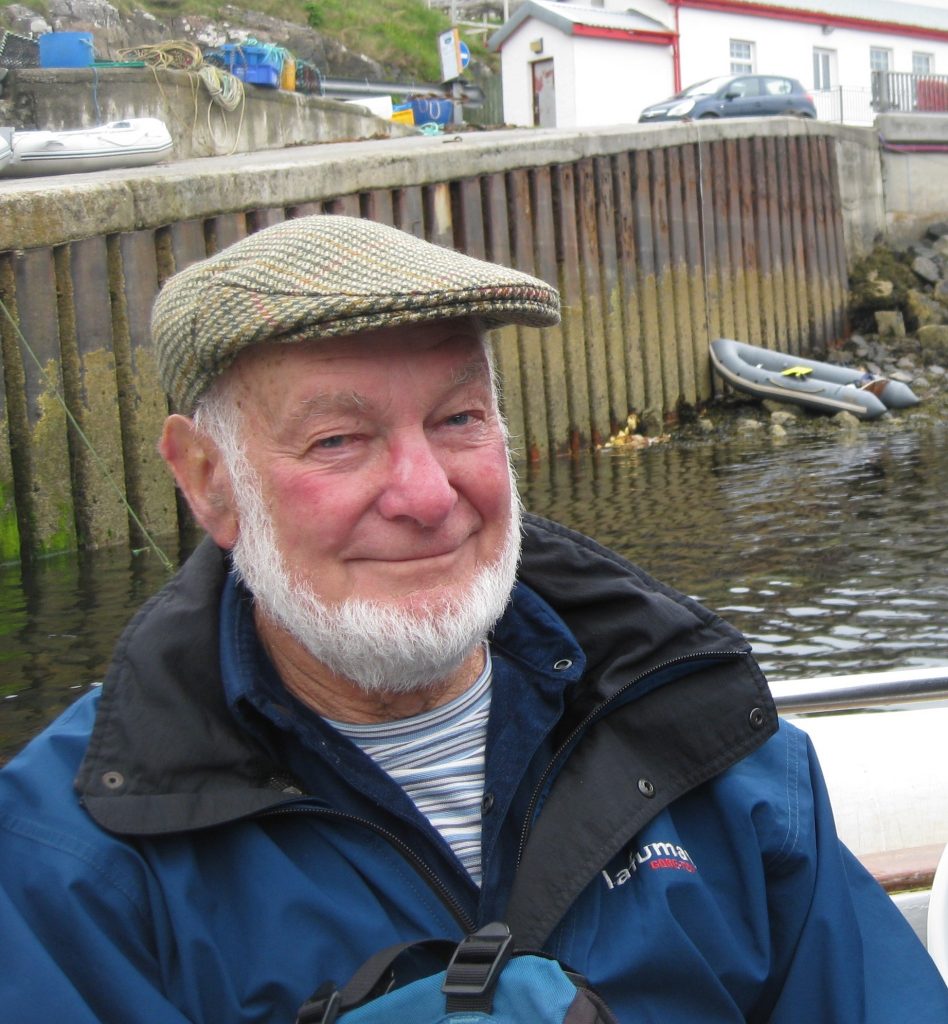 John heading for Pabbay in 2014

I was a schoolboy during the war.  My father worked at Metrovick and was able to have just one week’s holiday a year so we were able to have a short holiday staying at Rowarth, the little village a mile or two north of New Mills.  After some short local walks my father and I got to the top of Lantern Pike  –  wow!  We could see a long dark hill some way away. I was told it was called Kinder Scout and you couldn’t go on it because it was a private moor only for shooting parties. I was only eight but that is a vivid memory and it gave me a strong desire to investigate.  Subsequently I became a boy scout and very fond of camping, walking and then climbing. We firstly climbed on Windgather and Castlenaze. Later, the Rector of Llanberis opened his grounds for scouts to camp on. He gave talks on walking and climbing in North Wales. I owe the Scouts a very, very great deal.

After some years away from home and mountains I was able to return to Manchester and followed my brother who had joined the Lancashire Caving and Climbing Club. The Club was small but very active. I joined forces with Jim Rostron who was a strong walker and a fine climber. He was also a member of the Rucksack Club.  He invited me to join a few Rucksack Clubs walks. These I enjoyed considerably. I was able to keep up and through Jim I joined the Rucksack Club. I was, and am, much indebted to Jim.  (Jim’s wife Bertha was a climber and particularly strong walker.  She was a member of the L.C. & C.C. and the Pinnacle Club, a great couple indeed). Being a Rucksacker widened my horizons very considerably.

What does a perfect day consist of?

First and foremost being in the right place amongst hills or mountains. I like to remember as ‘perfect hill days’ the times I’ve had with a friend or friends in a mountainous area in fine weather, or indeed, when a start has been made in poor or dubious weather which has cleared to become an unexpectedly fine and sunny day. For a choice of area I would go for the highlands and islands of NW Scotland. (I’m not fond of travelling between such islands when the sea is somewhat disturbed, though!). 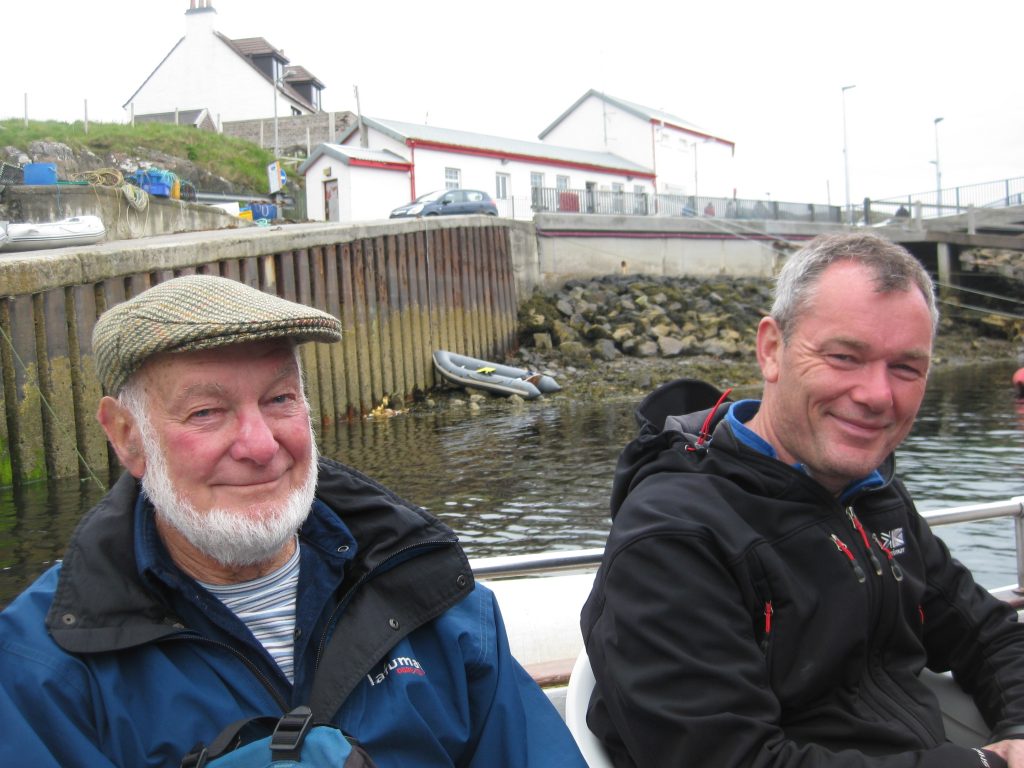 What have been the most memorable times?

A very memorable time indeed was my first Rucksack Club meet. This was in 1957, my friend Jim had invited me on a walk listed as “The Longest Ridge in Europe” –  a day walk from Glossop to Hayfield via Bleaklow and Ladybower. A large number, over twenty I think, set out from Glossop Station. Conditions were not good; we were soon in cloud and only half reached Ladybower. However, I had the enjoyed the walk so far and as numbers dropped out and disappeared it spurred me on to keep going. Whilst on Bleaklow we had each taken our own line, but soon on Kinder we stuck together. The weather improved, the cloud broke up and the moon lit up the scene. We pressed on in fine style, clattered to the station and settled into a carriage, rather wet, sticky and no doubt smelly. I sat, very thrilled to have finished with the three Rucksack finishers. There was some entertaining chat before we just sat and relaxed. It had been a great day. 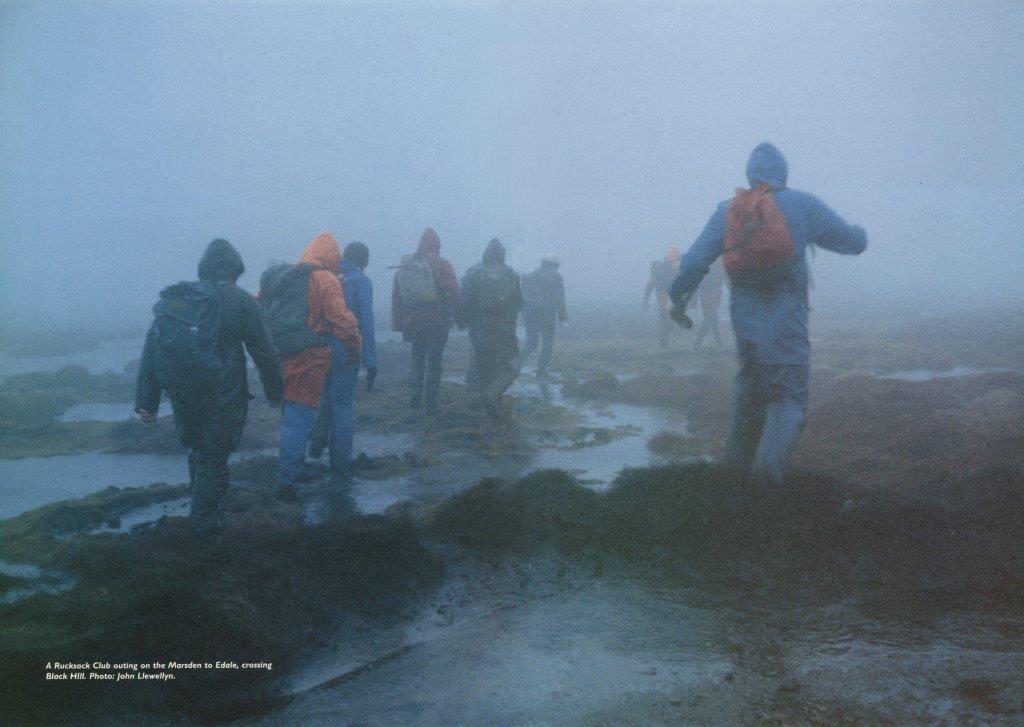 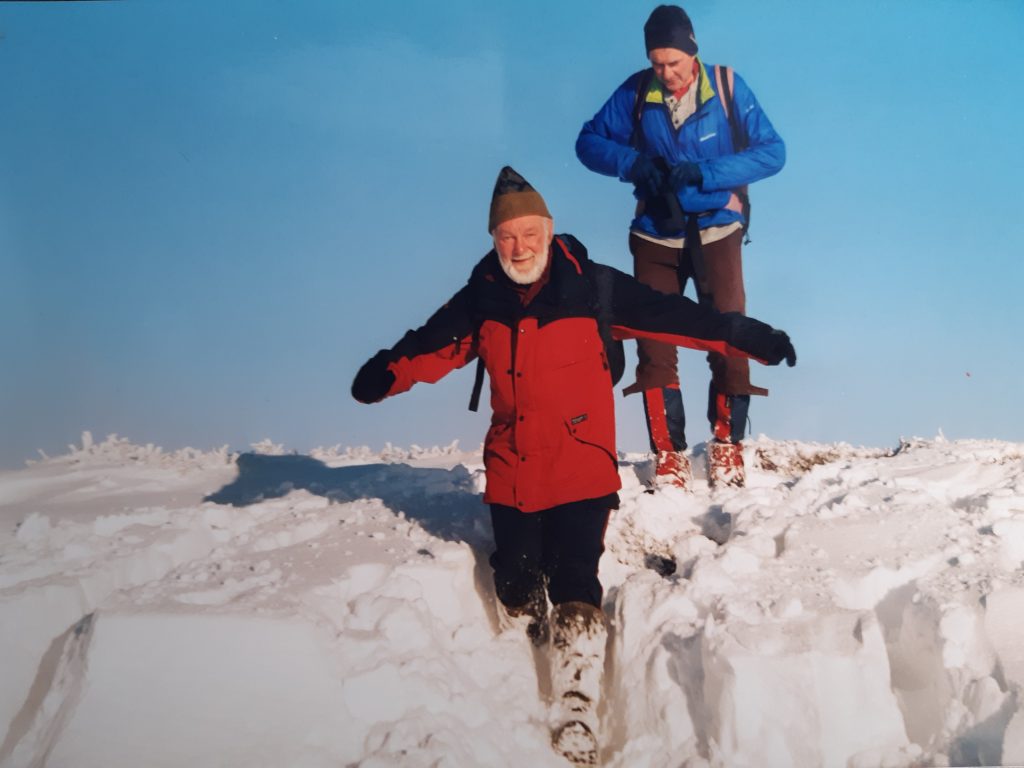 …and another on a much better day…Marsden-Edale 2003

Have you had any mishaps in the hills?

I’ve been very fortunate, or just plain lucky, in not personally having had a mishap when walking or climbing, but my companion George on one occasion was not so fortunate. We were following a narrow path high in the Cuillins attempting to return to Glen Brittle from Loch Coruisk. The weather had deteriorated far more than expected. George stood on a wobbly stone, went over the edge and landed about twenty feet down. Not a nice moment. Luckily for us a following group gathered round and with their help we made our way back to Loch Scavaig. George had a broken ankle. This was before the S.M.C. had a hut there, but we survived the night and were later rescued by the boat that had taken us there.

What is your dream hill objective?

A dream hill?  I’d like to be able to get up any hill nowadays!  I might be persuaded to take the train up Snowdon if the weather was superb sometime. There’s just one particular area I really would like to get to and see. I’m told that Kinder Scout, that very first ambition of mine all those years ago, is now covered in heather. Really? No kidding? Not just a bit of scrub here and there? Oh, get me there, get me there!

What makes a great hill partner?

Here’s one or two that didn’t become great hill partners.  He who when we were passing near a railway station during a walk suddenly decided to take the train, without any obvious reason. Or she who didn’t turn up at the start –  later saying that she had decided “to go to town with a friend to view the new fashions”. (Well, I ask you!)

Activity in the hills is now a matter of enjoying a gentle drive through hill and mountain scenery and checking the cafes and such that I used to enjoy. I remember the first time I stopped at the Snake Inn. Walkers had to use a small room at the side of the main building.  It was austere – seating was a bench seat around the walls intended for the beaters and such from shooting parties, I believe. A very great contrast was the all-comers-welcome pub squashed in between the A628 and the Woodhead Reservoir. It was great for mugs of tea. It had stone floors so wet through trousers and muddy boots no problem. It was demolished. 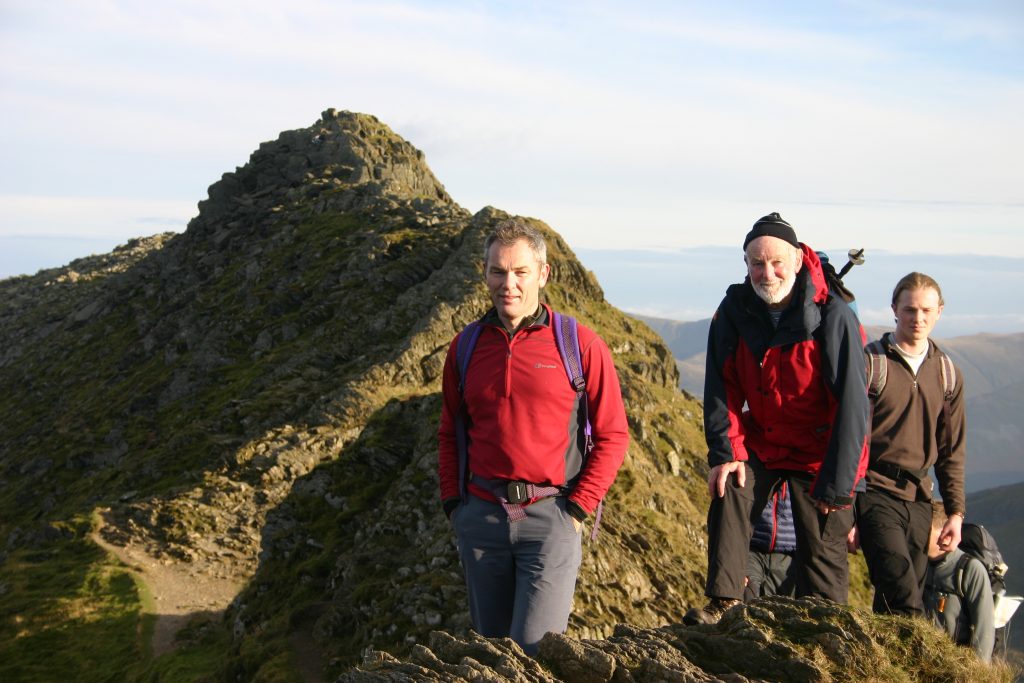 What future hill plans do you have?

I throw that one open. Any ideas please?