The next offering for the Classic RCJ article appeared in the 1912 Journal entitled “A Bivouac at Thirteen Thousand Feet”. Another understated article, it is a delight to read…candles rather than head torches, no alarm clocks and step cutting, are some of the impediments to climbing not normally suffered by the modern alpinist! The description of the pleasures of an unplanned bivi will, however, ring true to many. 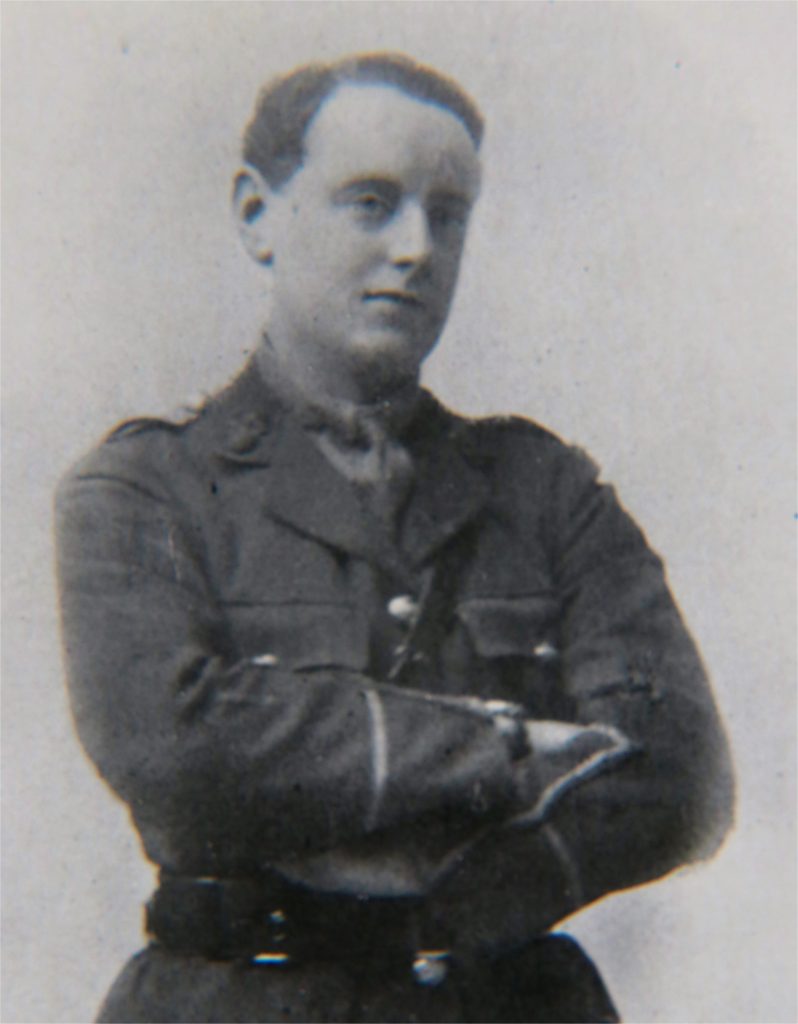 Its author, Stanley Jeffcoat [above], was a rising star in the Rucksack Club. He was elected to the Club in November 1908 at the age of 24 and was already an experienced climber in the UK and Switzerland. He rapidly developed his skills in the Peak, Wales and the Lakes climbing with the likes of Herford and Laycock. Three first ascents in the Peak stand out: Jeffcoat’s Chimney [VDiff] and Jeffcoat’s Buttress [HS 5a] at the Roaches [both climbed in 1913] and Scoop Face [HVS 5a] at Castle Naze [1914]…the picture below shows Jeffcoat soloing Scoop Face barefoot! Scoop Face remains a Peak District classic and is a Top 50 route in the Western Grit Rockfax Guide. 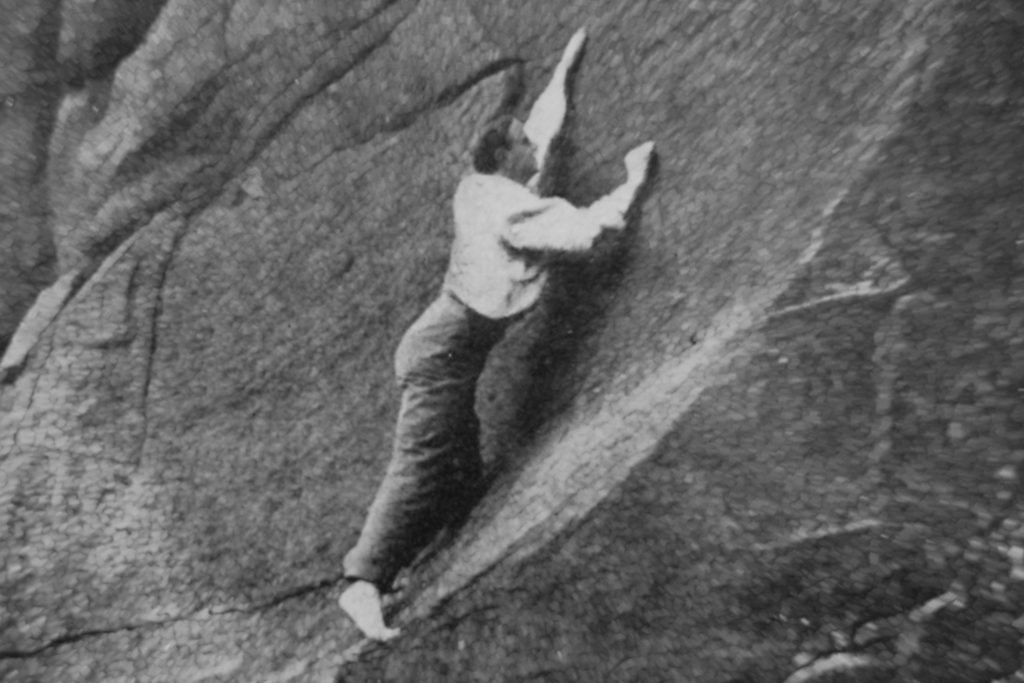 A year after becoming a Club member he was on the Committee and delegated to organise the June Social Evening. This, though a success of sorts, did not go according to plan as several named participants were absent and a note in red ink alongside the “Lantern Slides” read “Did not take place – no gas”. About this time he joined Laycock, Oliver and Ewen, as Journal Editor, editing and preparing the list of new climbs for future publication. This project was not completed without problems: at one point, Jeffcoat protested that the walking section of the Club Committee did not sufficiently consider the standpoint of the climbers. At one stage Laycock referred to certain senior members as “The Mandarins” and not in a complimentary way!

Jeffcoat also spearheaded the efforts to find a hut in the mountains…more on this in the next Classic RCJ article to be published!

When the War came, Jeff enlisted immediately, joining the Public Schools Battalion and later The Lancashire Fusiliers. In early 1917 he suffered shell wounds, but returned to duty as 2nd Lieutenant. On April 29th he was killed in an attack on the Oppy line. With nearly all the officers killed or wounded he rallied and led the remaining men in an action that enabled reinforcements to be sent in. At this stage he was fatally wounded. His Commanding Officer wrote with great praise and recommended that he be awarded the Victoria Cross posthumously which, unfortunately, came to nothing. There is a full record on the War Graves site of his burial and memorial at Roclincourt Military Cemetery.

I am indebted to Mike Dent for providing me with much of this historical information.

Click here to read “A Bivouac at Thirteen Thousand Feet”

Finally, below is a picture of a current RC member, none other than our honorary Assistant Editor [of everything!] John Payne, standing at the end of the Aletschorn Glacier in the very same Bel Alp the base for the adventure in 1912! 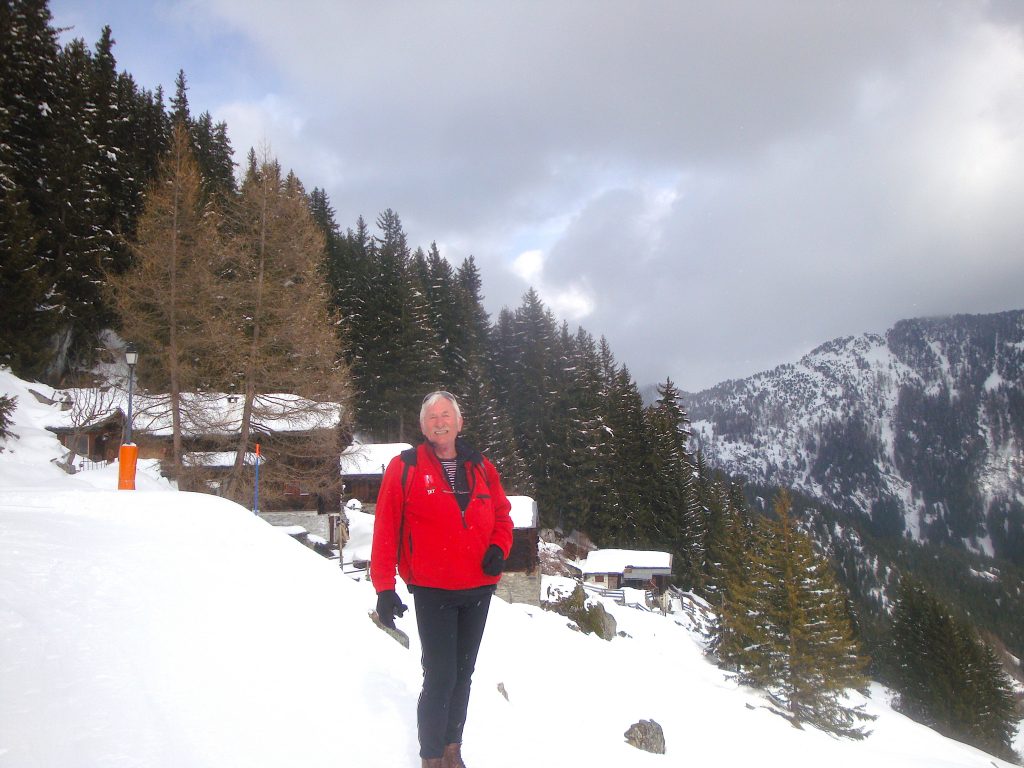