On the Hill (and other RC pursuits) with…Geoff Bell who, as you will read,  has been a serious and successful long distance endurance cyclist, runner and walker over many years. A very active Club member he was President in 2003-04. 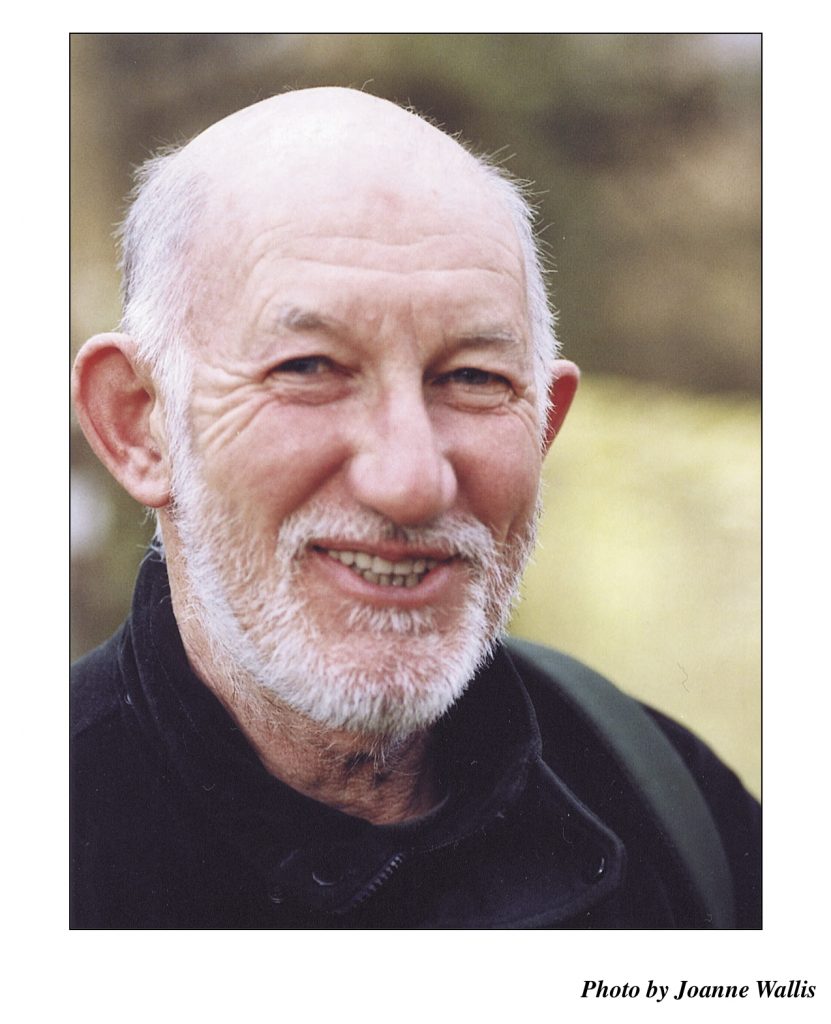 How did you get into “being out there”?

As a Sheffield teenager I was into cycling. Club runs and time trialling at the weekend and a 7 mile ride to work in the labs at the Stocksbridge steelworks. In all weathers. I carried my bike through the snowdrifts that the bus couldn’t get through. I never got under the hour for 25 miles, but did manage 226m in 12 hours. In hindsight, this was an early example of my being able to pace myself over long efforts.

Teens over, I was married to Mary, proud father of three daughters, and living in Glossop with a demanding job ensuring that the superalloys we made were up to spec. Then at 34 came my epiphany.

Chris Brasher wrote an inspiring account of the 1972 Karrimor mountain marathon in his regular column in The Observer. I resolved to do the next one, so it was Chris who got me going on foot in the hills. 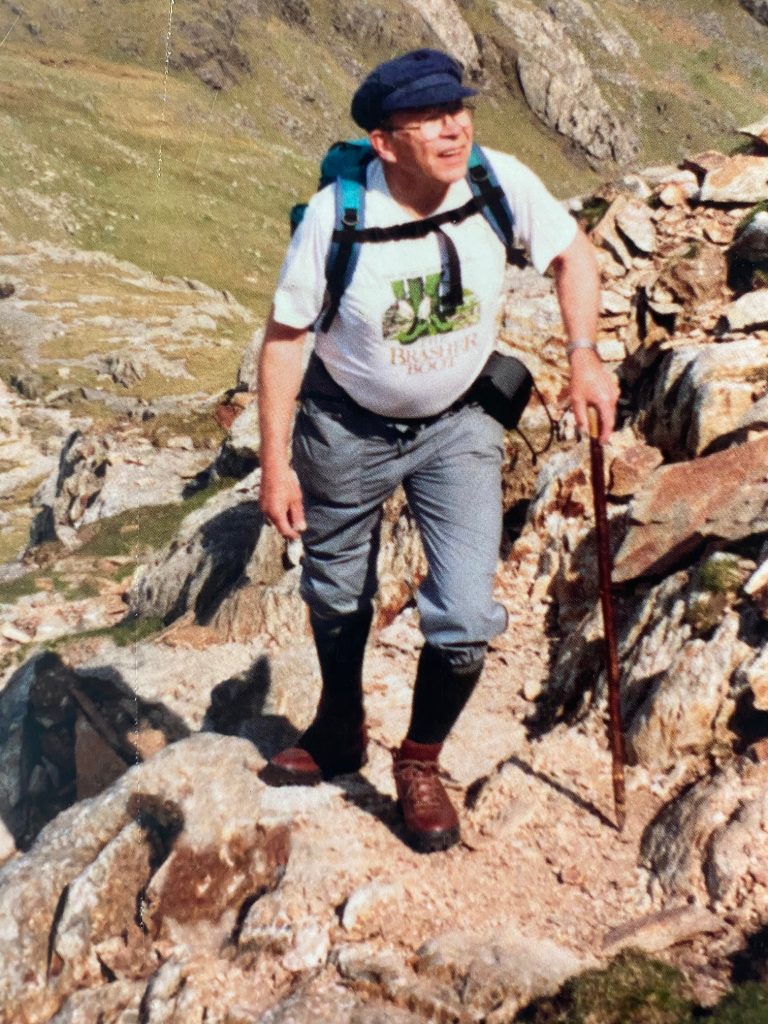 Chris Brasher as Geoff knew him

Influences and how I came to join the RC.

Chris obviously, but also my continuing idol – Fausto Coppi, who could ride away from his rivals in the mountains.

I then joined the LDWA (Long Distance Walkers), MDOC (Manchester Orienteering), and was one of the founder members of DPFR (Dark Peak Fell Runners). I was fairly active with them and in ’74 and ’75 I was in a Peak Walkers team in the High Peak Marathon (The Watersheds) which was beaten into 2nd and 3rd place by the Rucksack Club team. Separate to this, I had borrowed from the library ‘High Peak’ by Byne and Sutton. This is big on the RC from our early bogtrotters to the Ted Dance generation, and the then current hard men e.g. John Richardson (JR). I resolved to join them. With John and Ted’s help, in 1976 I did.

Over the years, what were your most memorable ‘Out There’ experiences?

I got into the RC team for the Watersheds in ’76. We won, and did so for several more years before contenting ourselves with the Vets. trophy (made by JR). With Ted Dance, Don Talbot, Mike Cudahy, and JR, I think that I did all the club classic walks including the new North Wales Horseshoe – the hallucinations of the second night of which are still etched in my brain. And the definitive Winter Tan-Cat. (see RCJ 1979)

I once heard a “Thought for the day” where the theme was that we all like to ‘leave our mark’. It’s probably true. In my case, the first instance was at High Moss. After doing the Lakes 2500s with JR (except Pillar Rock for me), I was looking at the big map on the wall and saw a straight line from HM to Edale. Jubilee walk 1977. Memorable, and not yet repeated. (detailed, together with the story of the ‘Hobbit House’ in a folder in the HM library).

In the following decades I got back into serious time trial cycling. 235 miles in a very wet and windy 12hrs in Norfolk for second place was tough, as was a meagre 387 miles in the ’91 Mersey Roads 24 which was on a very hot day. My feet, confined in narrow cycling shoes were in ‘hot foot’ agony at the end. A bowl of cold water gave welcome relief. Most of my subsequent cycling was in sandals! 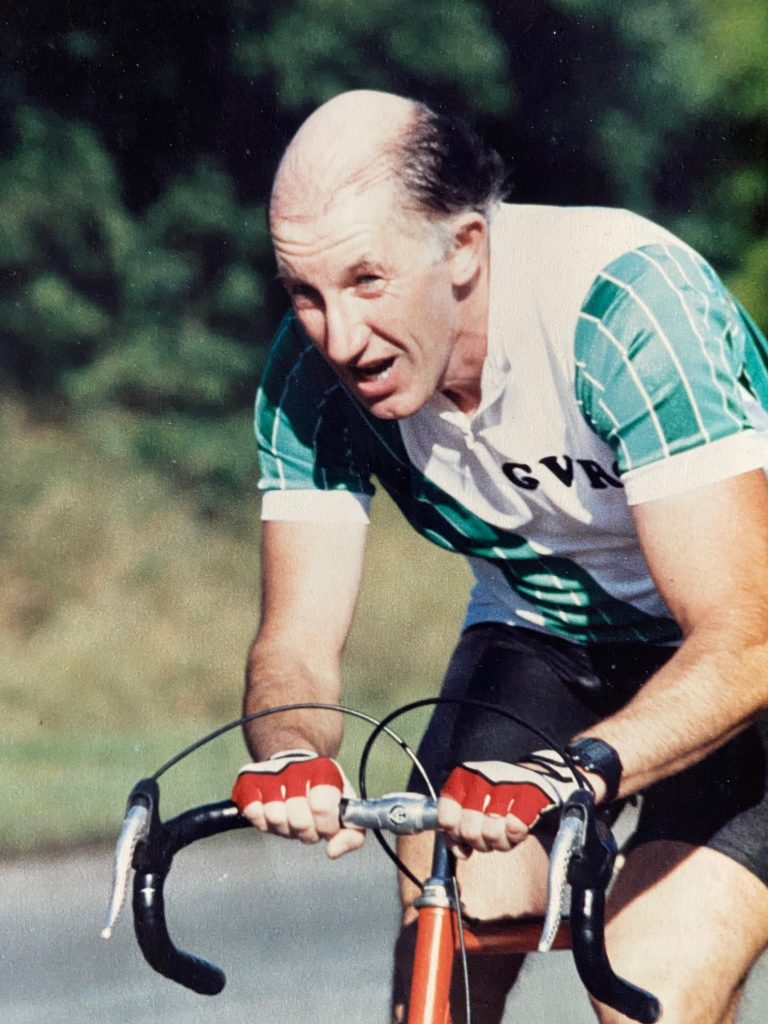 Geoff back to serious time trialling

1983 was the year of The Quadrathon. Always up for challenge, I entered. A 100 mile bike ride and a marathon run were no problem, but a 50k race walk was more demanding. Expert instruction on swivelling hips got me up to a reasonable 6 mph, which left a 2 mile swim in the sea at Brighton. I could never master the crawl, so it was the breaststroke that I built up to 1 mile in Droylsden baths at lunchtimes. This was in the days before wetsuits, so I was liberally covered in lanolin grease – which took some getting off before changing into walking gear. I just survived, but it was a close thing. I was 24th out of 89 starters and oldest finisher. (I have included this because wild swimming is now one of our outdoor activities).

In the late 70’s I had a spat with the grandees of the LDWA over their insistence that only walking was permitted in their events – no jogging or running. I argued that self-sufficiency on foot was far superior to pure walking with support stops. To prove my point, I determined to do a self-sufficient Pennine Way in under 5 days. In 1981 I did – on my 5th attempt.

Late ’93, I think on a Chris Bolshaw walk, I was prattling on to someone about the possibilities of extending the now-routine double ME to a double-double. John Crummett overheard, and said words to the effect of “let me know if it’s on”. A few days before, conditions were looking good. He was surprised to get the call, but he was the perfect companion. We still had enough energy left to stay with the doublers – on their outward journey at least. John finished some half hour before me. I, flagging somewhat, was kindly shepherded up and over Kinder by Chris and Gill.

By 1999 I was into long distance cycling again with Audax UK and did the classic PBP Paris-Brest-Paris 1200 km with Gerry Goldsmith.

In 2000 I had the bright idea of doing the End to End as a series of Audax rides combined with staying at the three club huts and climbing Snowdon, Scafell Pike and the Ben. It went amazingly well apart from a broken crank in Callendar at 3am. (See RCJ 2000 ‘I did it my way’.) 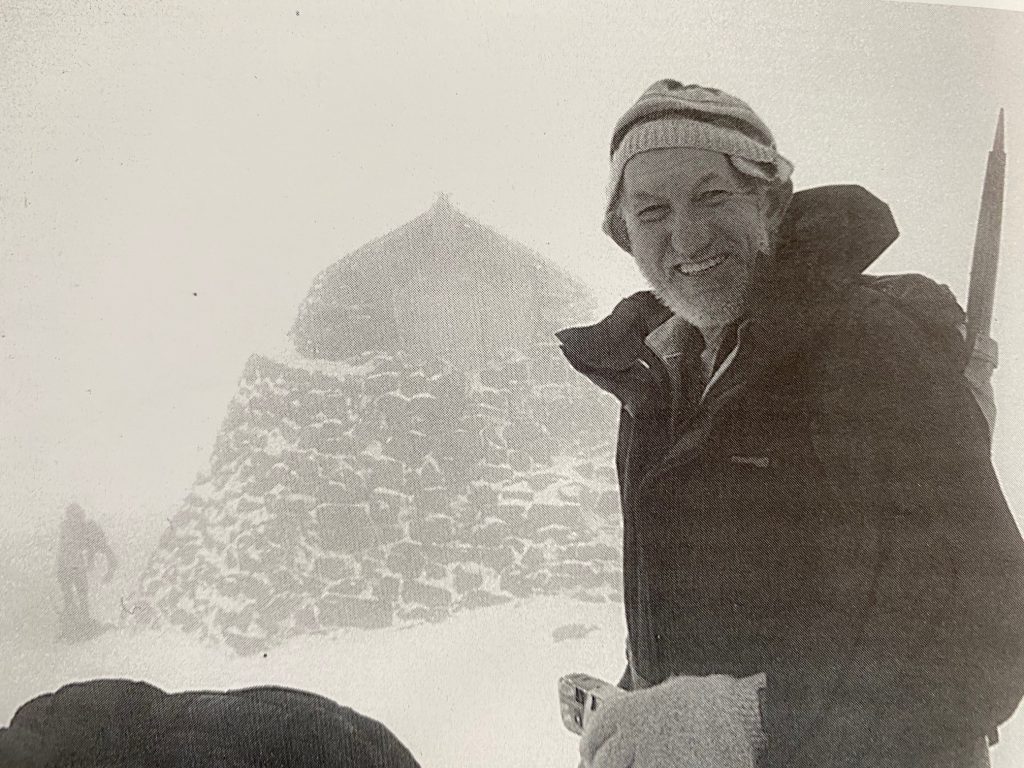 I have never had the bottle to be a climber, but in this period I persuaded real climbers to take me up Pillar Rock and the In Pin. Terrifying.

Thanks to an introduction by Chris Brasher, I was able get Nicholas (2 degrees W) Crane to be Principal Guest at my first Dinner. The following year it was our own adventure seeker and raconteur Brian Cunningham. Both did us proud.

The French Audax cyclists have a series of DIY Mer-Montagne rides. In 2006, I planned and just managed a 1000 km ride from Calais to Ventoux in 100 hours. Just over the other side is the Tommy Simpson memorial where I paid my respects. Memorable? Oui ! (See RCJ 2006) 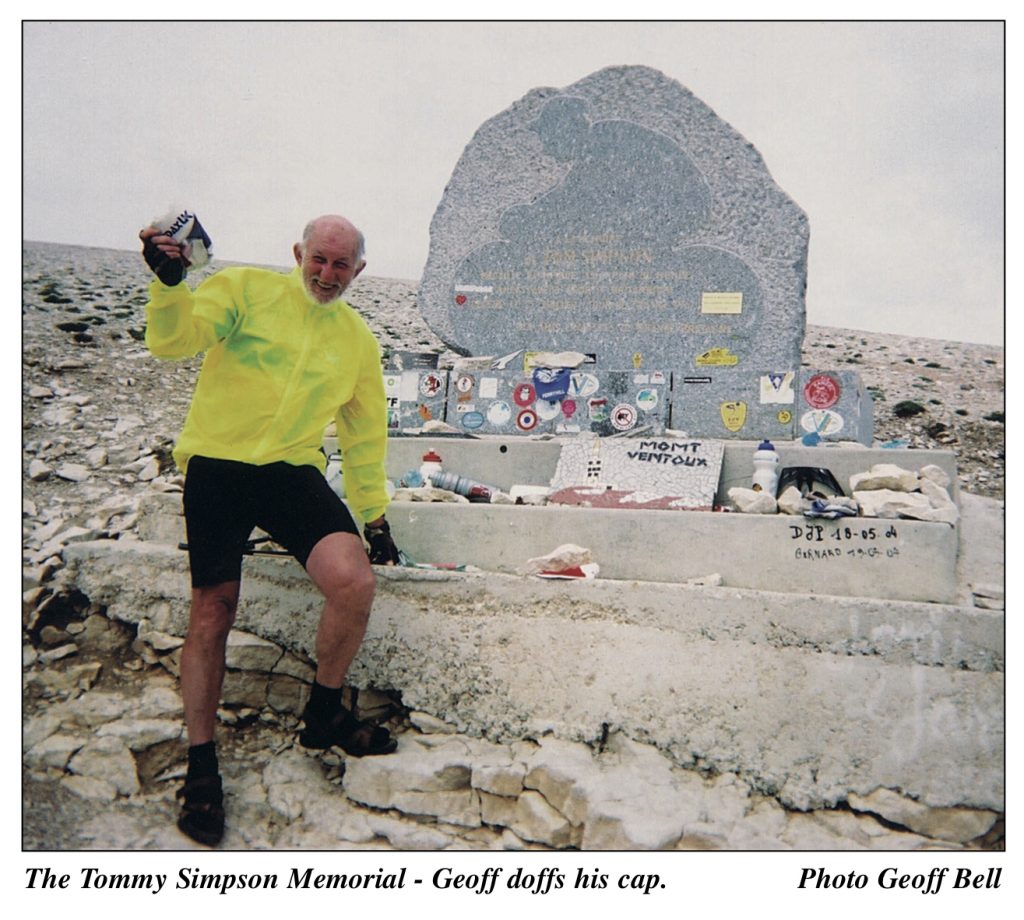 These were the biggies, but a meander through the saved pages of Meetstaff gives so many more.

Fortunately, very few. Waking up sat on a mini roundabout in Nelson with a medic talking to me. I was on an Audax ride and had not noticed the smear of diesel on my chosen line. Thereafter I reluctantly wore a helmet. The only other thing was a sprained ankle coming off Torside trying to keep up with the young Andy Howie led doublers.

A sunny day on Bleaklow with the white hares in the heather all by myself, and perhaps a snooze. On the way up, a drink of the magic waters of the spring below Shelf Benches.

Partners. So many, with all their strengths and foibles have shared many miles with me. We have plodded, walked, ran, cycled, suffered, and were elated together.

No hang-ups in saying that I have had a slow version of MND for four years. Biking was soon out – I couldn’t brake. For a while, I enjoyed the company of the Wednesday Walkers (A Team), and more recently, accompanied by Mary, the extremely sociable B Team. Stiles have become increasingly difficult, so are now avoided. The 7′ one on the outskirts of Lyme Park a few months ago was quite a challenge.

Plan. Do what I can while I can.