Welcome to another “On the hill with…”. This time it is the turn of Gerry Goldsmith. Gerry was one of the Club’s first female members, joining within a year of the historic change in 1990, and a very active member in all aspects of Club activities as she reveals. 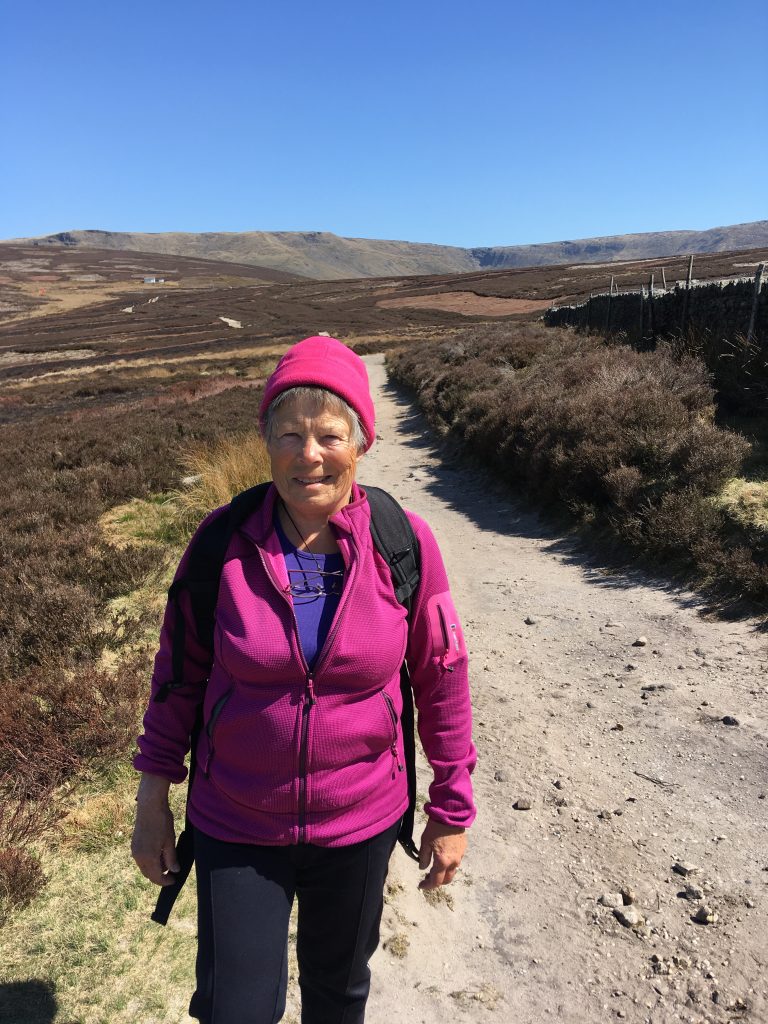 Camping with the Girl Guides got me started. Then lots of walking on Kinder with the YHA Society at Sheffield University, and hitch-hiking (in pairs) to Youth Hostels in the Lakes. A few years later I met Neil, we moved to Stockport and joined the Kinder Mountain Rescue Team (KMRT). They took us climbing (Tuesday evenings) and we were hooked. With KMRT we learnt winter climbing in Scotland and went to the Alps in summer. 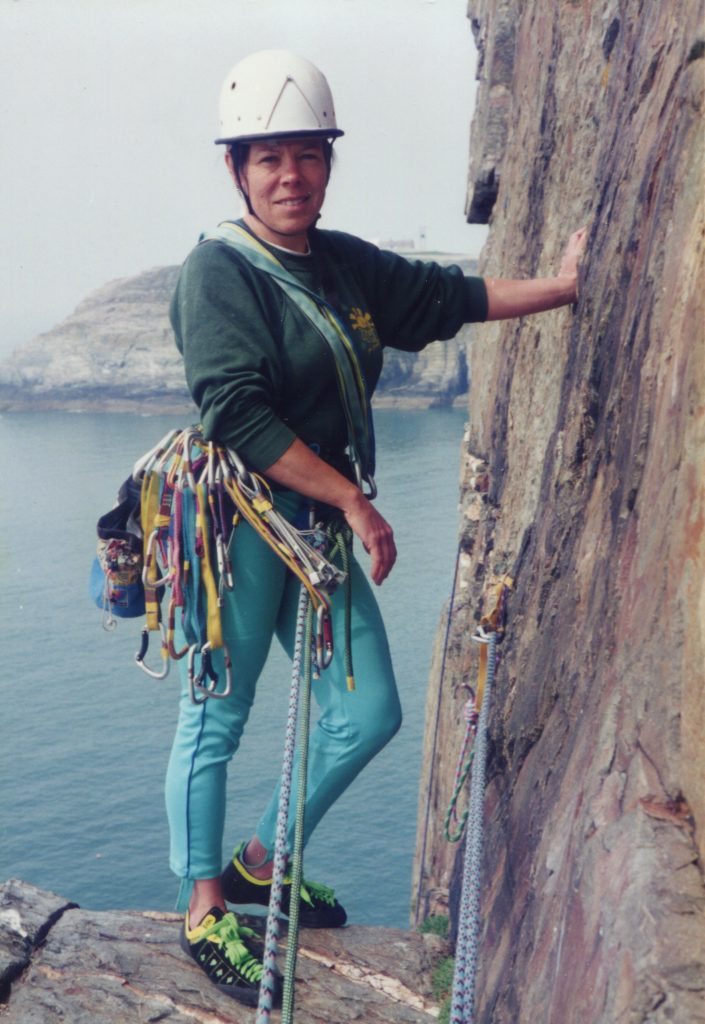 Lifting heavy stretchers and climbing with heavy sacks ruined my knees, so I graduated to fell-running. It seemed the answer, nothing to carry! My favourites involved running long challenges such as the Bob Graham round, the Karrimor International Mountain Marathon (KIMM…now morphed in to the OMM) and the Derwent Watershed.

My long-standing friends in KMRT and the Rucksack club. (And Neil of course!)

We already knew some Rucksackers through fell-running and they suggested Neil joined. Neil promised to vote to allow women in and I joined as soon as the vote went the right way, in 1990. (See also Gerry Gee’s ‘On the Hill with…’.)

Great company, a good route that stretches me just enough (but not too much) and a drink or two at the end.

There have been so many but here are a few that stick in my mind.

The traverse of the Grey Corries: fantastic Alpine conditions, iron-hard névé, with KMRT in the early days. From Nancy’s Fersit bunkhouse, now sadly no longer. Not too hard but a wonderful Scottish winter experience. 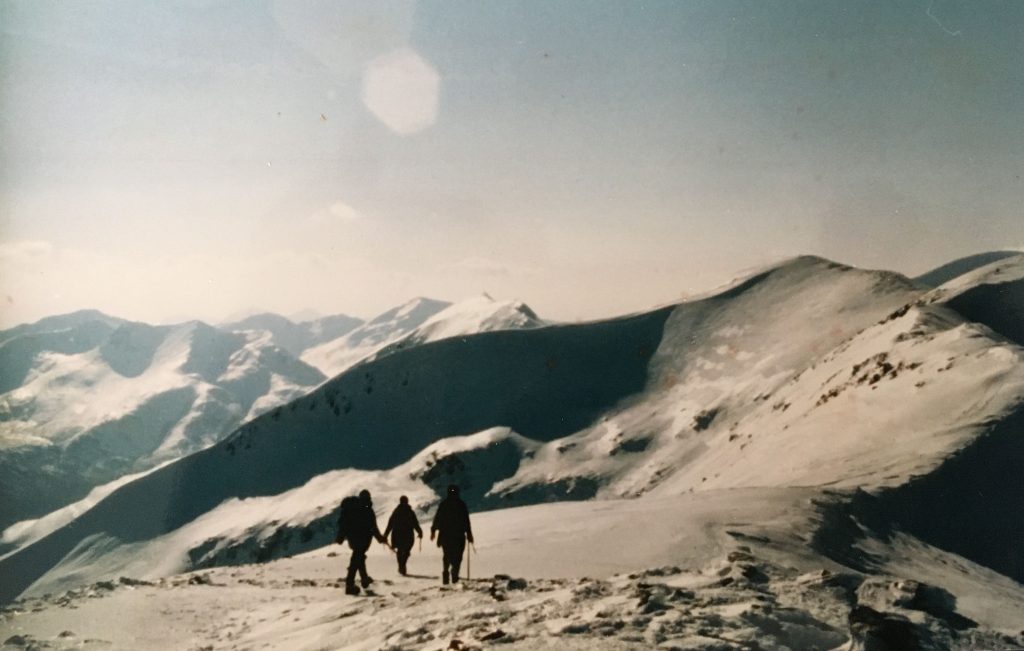 Traverse of the Grey Corries; 1979

Mont Blanc: my first summit at altitude, with two friends. We’d been in Chamonix for two weeks and were well acclimatised, so romped up it and were first to the top (not that we were competitive!). Sounds like Parminder’s experience!

Expedition to Tirich Mir, Hindu Kush: memorable because it’s my highest climb! Our longest expedition, this was seriously tough mainly due to the altitude. I didn’t reach the top (7707m) but got to 7350m, an altitude of which I was quite proud. (see RCJ 1995-6) 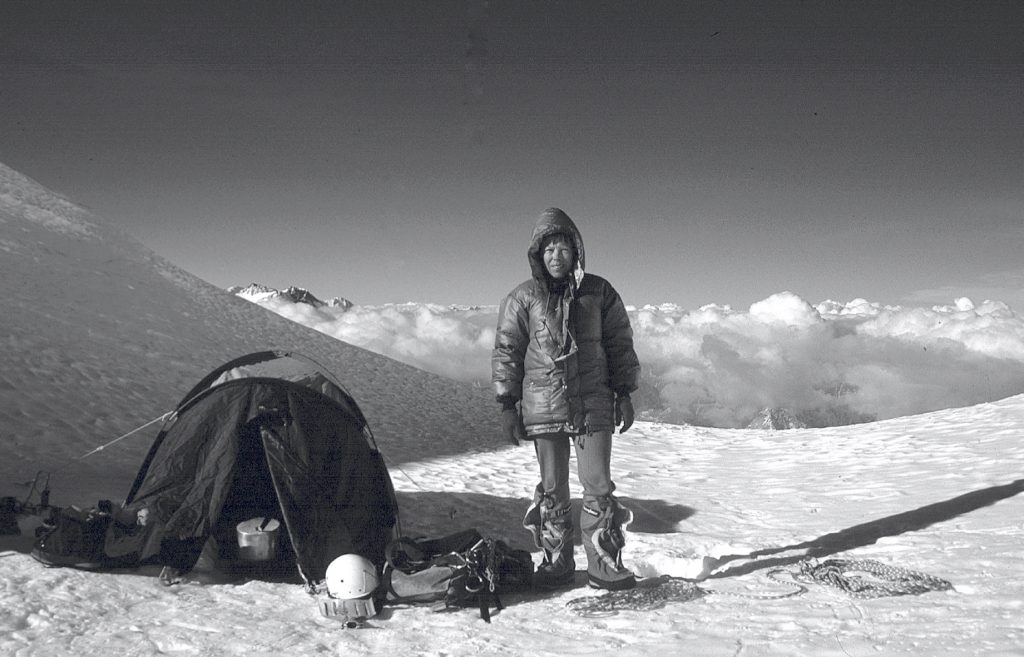 Pyrenean Traverse by bike: having just retired I needed something to do. So I did a classic bike ride from the Atlantic to Med over 10 days. This is memorable because it’s one of the few things I have done solo, and I really enjoyed the challenge. With friends, you share everything. On your own, you need to rely on your own resources, make all the decisions (and mend your own punctures!). (see RCJ 2008)

Paris-Brest-Paris (PBP): another cycling one which sticks in my mind. I had done a few of the qualifying Audax rides with Geoff Bell, but we agreed that it was best to ride independently on PBP. Geoff set off like a rocket as usual, but I caught him up at about 200k and we rode together from then on. My memories include: great support from the French along the way; meeting some cyclists from Nice; Geoff filling his hat with water and giving it to me when I was suffering from sunstroke. (see RCJ 2000/01)

A long time ago Neil and I were doing the traverse of the Pelvoux with Mike. Going up we made guidebook time, but it stated 3 hours for the traverse, which must have been an error – it was more like 13! Coming down in slushy conditions Mike (an old KMRT friend now deceased) fell on a steep short couloir and plummeted down. We were roped together, all used our axes to eventually slow us down. A frightening moment.

A good ‘team worker’. Someone reliable with a sense of humour, who shares with you the ups and downs of the day. Plenty in the Rucksack Club.

Now, apart from occasional visits to the Stockport climbing wall, I walk with the RC Wednesday Walkers. And, of course, living in Hayfield I have plenty of scope for walks.

Just to keep walking in the hills. And cycling with my friends (Ed: or alone…see picture below!). 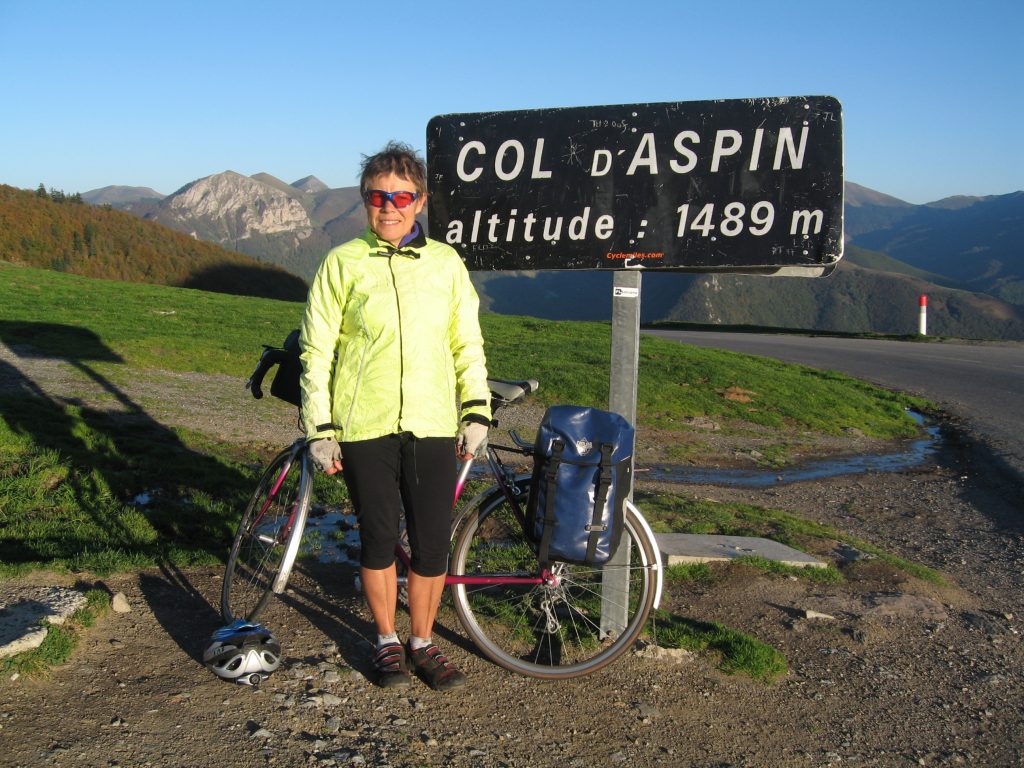 Gerry on a solo journey across the Pyrenees; 2006

Not really. I am an optimistic person who believes in looking forward rather than dwelling on what might have been…… but I wish I had been to the summit of Tirich Mir!

Great friendships, good company in the hills. Memorable meets which encompass walking, climbing, running, cycling. And the huts of course!