Welcome to another On the hill with…” This time it is John Beatty, our well known nature, travel and adventure photographer member. He is a former Club President [2007-08] who has been ‘getting out there’ for many years…read on and enjoy

From the age of 5 my dad took us (and two sisters) out walking twice a week throughout our years as children at home. Behind our house in Bramhall in those days, were fields. We had complete freedom to play away from home with friends out into the surrounding woods, valleys and fields. Every Sunday morning our favourite places were Lyme Park West Lodge entrance near Pott Shrigley….and the Hayfied side of Kinder, as far up as the bottom of William Clough. On one very special occasion when I was 7, we made a day trip to Ramshaw Rocks near Leek. Scrambling around those rocks that day made an enormous impression on me. I never knew their name for many years, they were known to us as “the rocks”. During the late 1950’s we went on holiday to Anglesey and frequently passed through Ogwen. One misty day we stopped at the layby beneath what I now know was Milestone Buttress, and I looked up to the Main Cliff of Glyder Fach disappearing into the cloud. Tiny, tiny figures were visible on the face. This was an unforgettable vision that remains with me today. I wanted to do that! In the six week big freeze of 1967 I clearly remember climbing overhanging snow drifts in the hidden valley of Clues Hay below Park Moor in Lyme Park, using a tent peg like an ice dagger! During my teenage schooldays at Moseley Hall Grammar School in Cheadle, the annual ‘school camps’ were held in Snowdonia near Capel Curig. It was here I discovered rock climbing, when we were taken on an ascent of Flying Buttress on Dinas Cromlech. The climb was led by two experienced teachers, my PE teacher Dave Turner, and my physics teacher, Brian Richards a member of a mountaineering club called The Rucksack Club! One summer there was serious flooding at the campsite and “Mr Richards” took us all to a climbing hut called Beudy Mawr in Llanberis Pass, to spend the night while the flood at the camp subsided. This was a new world. In ’69 I bought my first crampons, an Aschenbrenner long shaft wooden ice axe [made by Stubai, Ed] and a cloth anorak and moleskin breeches from an army and navy store on Piccadilly approach in Manchester. Soon I took them to the big snow fields on the side of Kinderlow End to ‘test’ them out! Soon after this I acquired a small motorcycle and, with friends, made many exploratory trips to nearby crags. My two first independent leads (with a soft terylene rope and hemp waistbelt), were Twin Chimneys at Laddow, and Spiral Route at Mow Cop Pinnacle. During 1969 whilst in the school 6th Form, I attended a mountain training course to become a volunteer warden in the Peak National Park. It was here I met other volunteers (Neville Coeuille and John Farrow) who mentored me in navigation, access issues and leadership skills relating to the Peak Park’s work on Kinder Scout and Crowden areas. That year, as a new young warden, I spent 54 separate days walking on Kinder Scout. 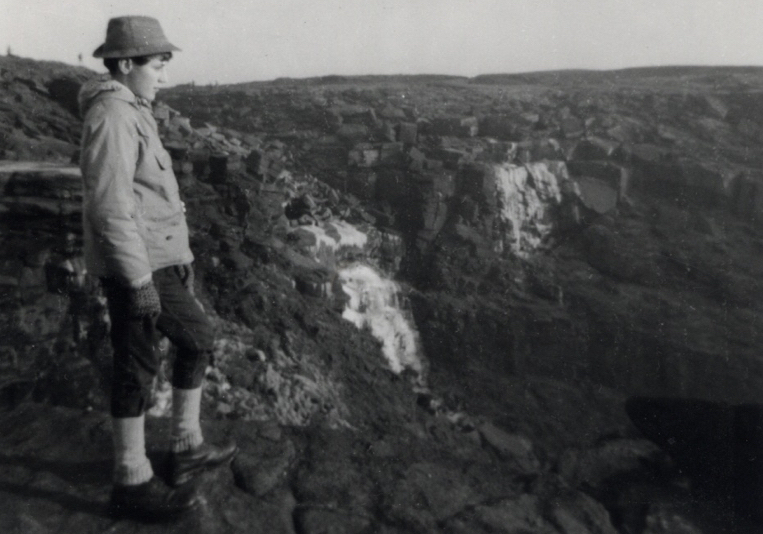 John on Kinder Scout 1965 [Ed: Note the attire…very trendy for the time] 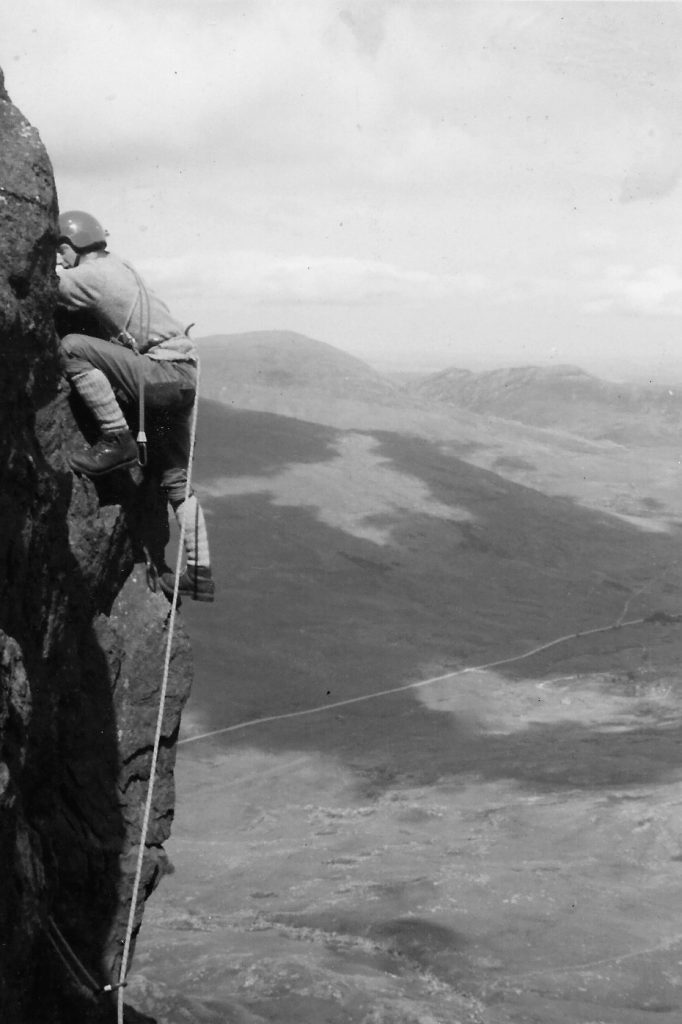 John climbing on the East Face of Tryfan, 1969

As a young student at Bangor Uni in 1970, I returned to my old school camps in Snowdonia, as a helper. It was here I met a new member of staff, by the name of John Allen (who was clearly a very experienced climber and mountaineer), and struck up what was to become a lifelong friendship. John versed me in the deep heritage and history of the mountain world.

We climbed together frequently and soon he suggested I might consider applying for membership to a mountaineering club in which he was a member. The Rucksack Club. On the evening of my first introductory indoor meet, Ted Courtenay was lecturing about his recent attempt to climb Huascaran in the Peruvian Andes. I was transfixed. In 1974 John invited me to join an expedition he was planning with some Club members, including Ted Courtenay, to the Indian Himalaya on the Kishtwari/Lahual border.

This was ancient India before modern trekking. Wild mountain passes and quiet villages, a vision I treasure today. Life turns many corners. Mine did on that trip when Ted (with whom I shared a tent) said, “When we get home you should meet my daughter Janice!” I did, and we have been together for 42 years.

First off, any day on a hill is a good day, alone, or in the company of a friend. A perfect day out would include an essence of commitment. A dawn start and a sunset finish, the lower slopes would be oak or fir wooded with a simple path. The temperature would be sub zero and the mountain above would be glistening with snow and ice, urging me upwards. As the glowing slopes above were ignited by daylight I would strap on the crampons and hear that first squeak and crunch of hard snow. As an important part of any mountain day I would be aware of any plant, bird or beast I might encounter. I would be heading for a winter scramble or steady mixed snow and ice climb. The summit would be rocky, fiercely cold, and have an inviolate spirit. The view would be extensive with neighbouring majestic peaks. A supreme sense of leaving the world behind, would pervade.  Then the cautious urge to return safely home down into the darker world in which we live. The pub would be open, the beer would be a hoppy IPA and we would sit by an open fire. Happy days! Bring ‘em on!

There have been many days, so many memories. Here are a few: 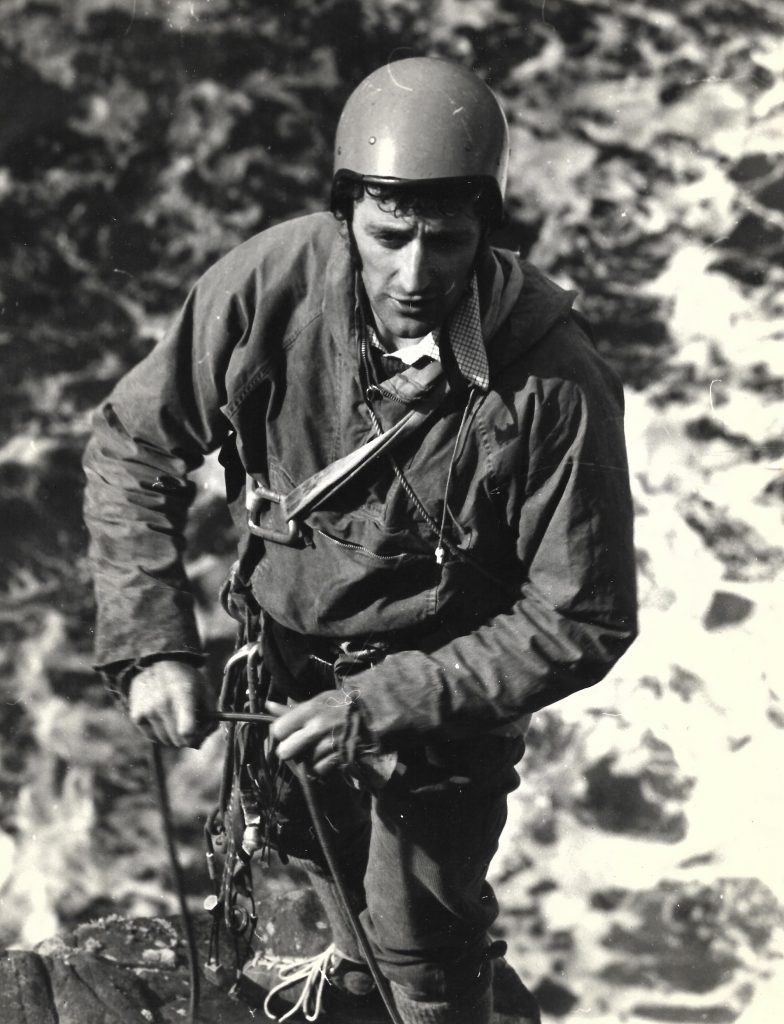 John on the Old Man of Storr 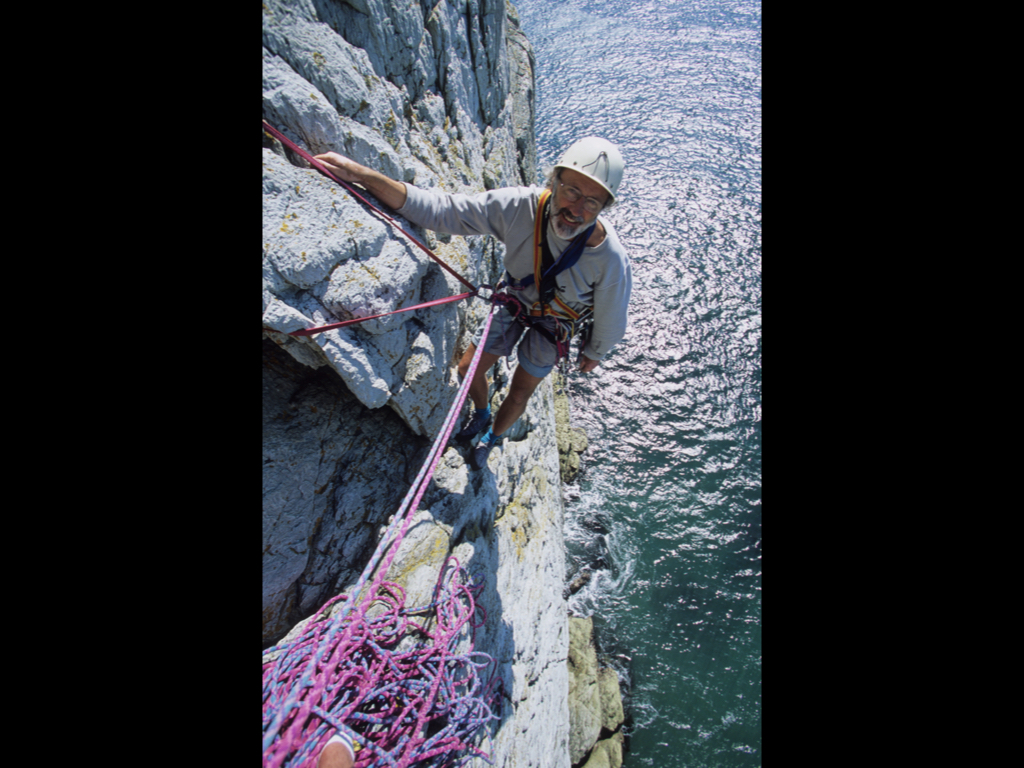 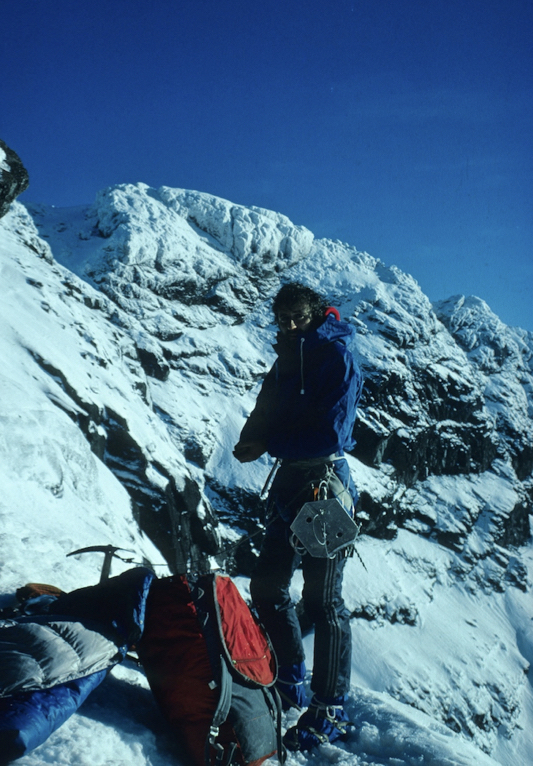 John on the winter Cullin Traverse, 1978

Matterhorn, Denali and The Nose have always been on my mind. But maybe just a dream, now! Probably more realistic is to continue enjoying walking in wild places, especially if they that have abundant life.

The mountain itself is often the best company!

But if you insist, my best company would be a non-competitive friend with similar objectives, a grand sense of humour, self contained and reliable in a crisis.

With a busy professional +/- family life, how do you manage to keep active in the hills?

All my working and home life is ‘active outdoors’, with little difference between the two. I’m still not sure if I’ve worked for my entire life, or never worked at all! Ambition seems less relevant these days.  Remaining creative and being in a quiet natural environment feels much more important.

To continue to climb and walk and enjoy the beauty of mountains until I draw my last breath. 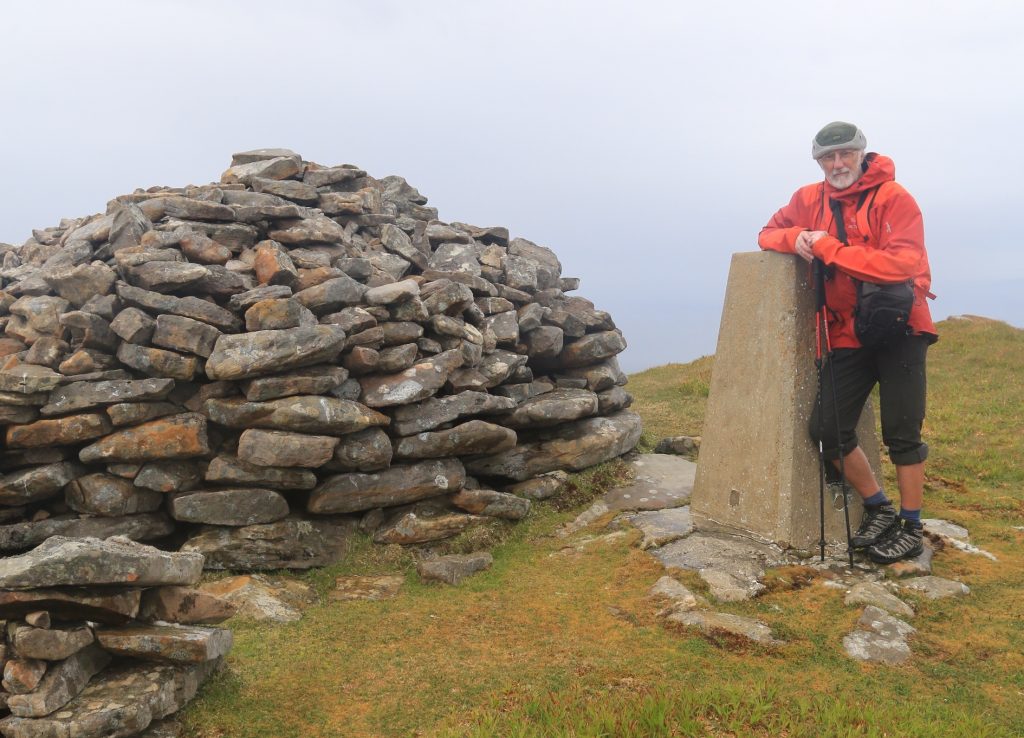 Being a member of the Rucksack Club has given me a life filled with shared and trusted friendships, and a sense of being part of a small but historic thread of human history.

Closing words: Adventuring is a mysterious urge, and being part of this ‘family’ of like-minded souls is both reassuring and strengthening as we all look forwards in this changing world. 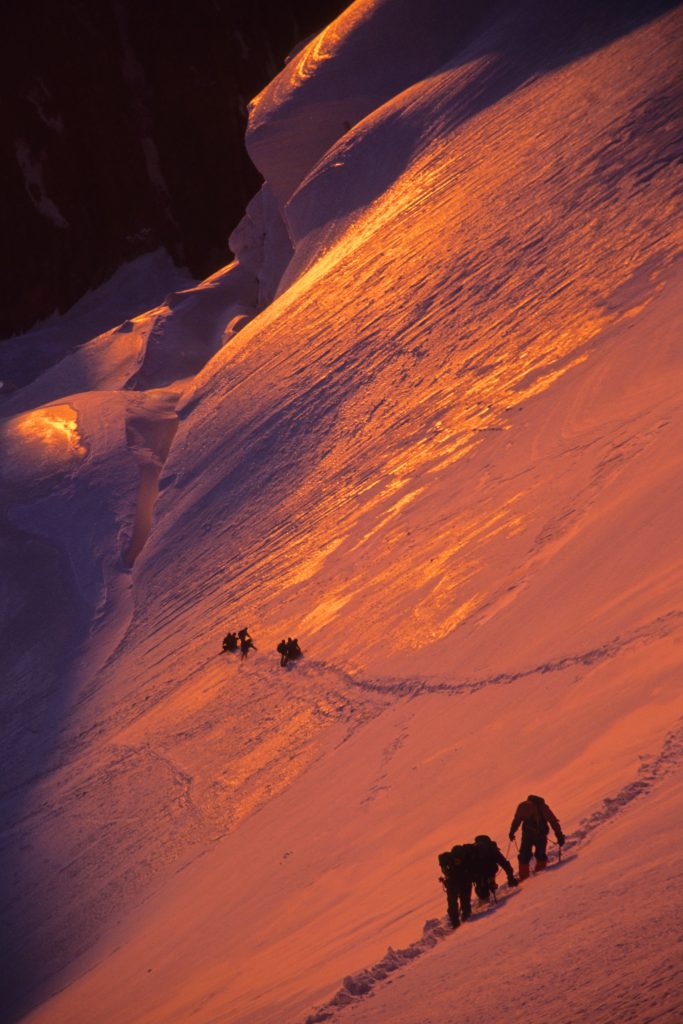 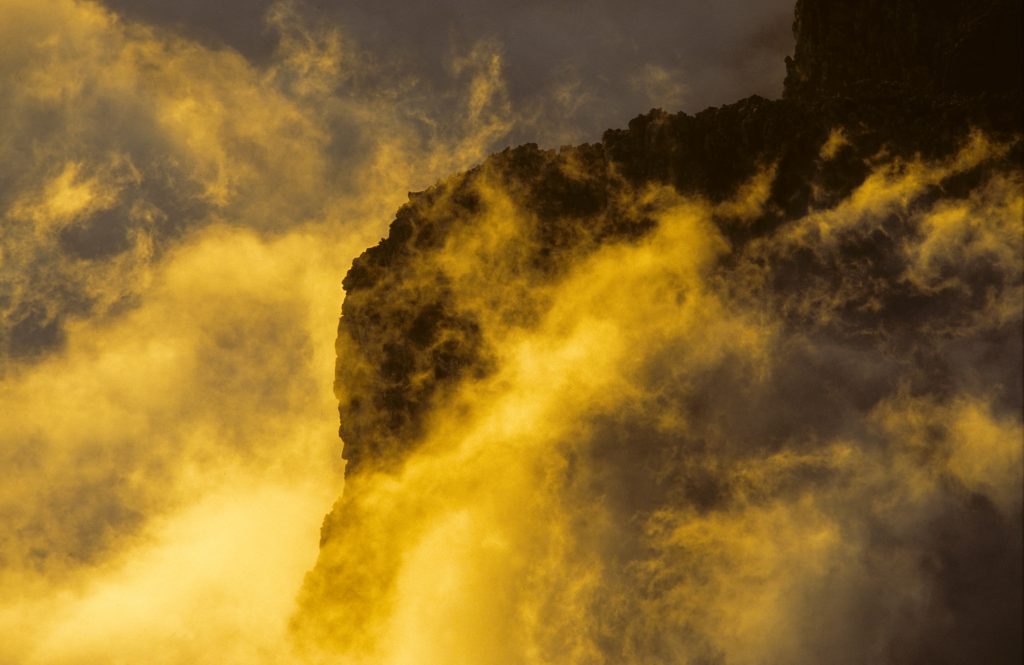