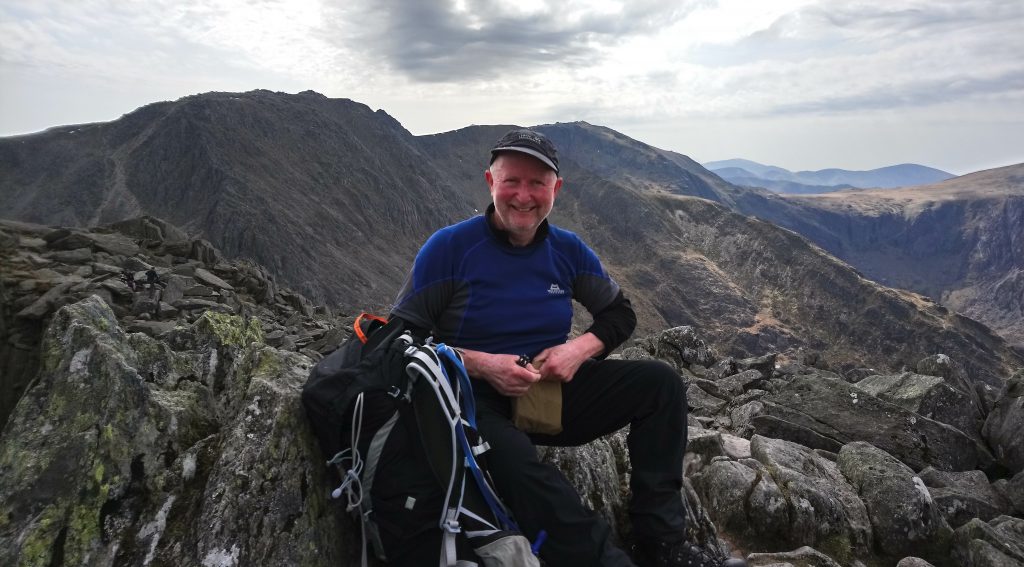 Tim at the top of Notch Arete, Tryfan (2018) before heading to Beudy for some Anniversary drinks! (Les Watt)

Family walks and then school outdoor pursuits.  We lived on the edge of the Peak District. My mother’s side had been in the area for a few generations and knew the local footpaths, which we walked.  This was in the days before rights of way were marked on the OS maps, and existing footpaths were sketchy.  We came across Peak and Northern signs further into the hills and followed these too.

Then a school trip to the Lakes for a week, walking the hills around Ambleside with an overnight camp.  All in for £5.  I wanted to do more.

This was around the time of the TV spectaculars, climbs like the Old Man of Hoy and Gogarth, along with main stream media coverage of expeditions like Annapurna South Face in 1970.  So, when I had the option of rock climbing on Wednesday afternoons at school there wasn’t a decision to be made, it was a no brainer!

The school climbing was run by Ron Bailey, a (lapsed) climber and physics teacher.  Turned out he’d been active in the late fifties and early sixties and had an early ascent of Cemetery Gates to his credit.

He gave us a serious free ethic, small steps, look to your footwork and so on and had us leading by the spring.  Gear was improving, my first nut was a MOAC, I still use it, much to the embarrassment of current climbing partners!  We used Viking hawser laid ropes and would spend (very) wet Wednesday afternoons twisting the lay to remove any grit.  (And if you tell that to the young people of today, they won’t believe you!)  Ron took us out on Sundays to Peak District crags and occasional longer trips to his old university club hut near Tryfan.  He used to have trouble with the minibus, it often developed a steering fault around lunchtime and would swerve into a pub carpark.  Best to leave it for half an hour to sort itself out lads … 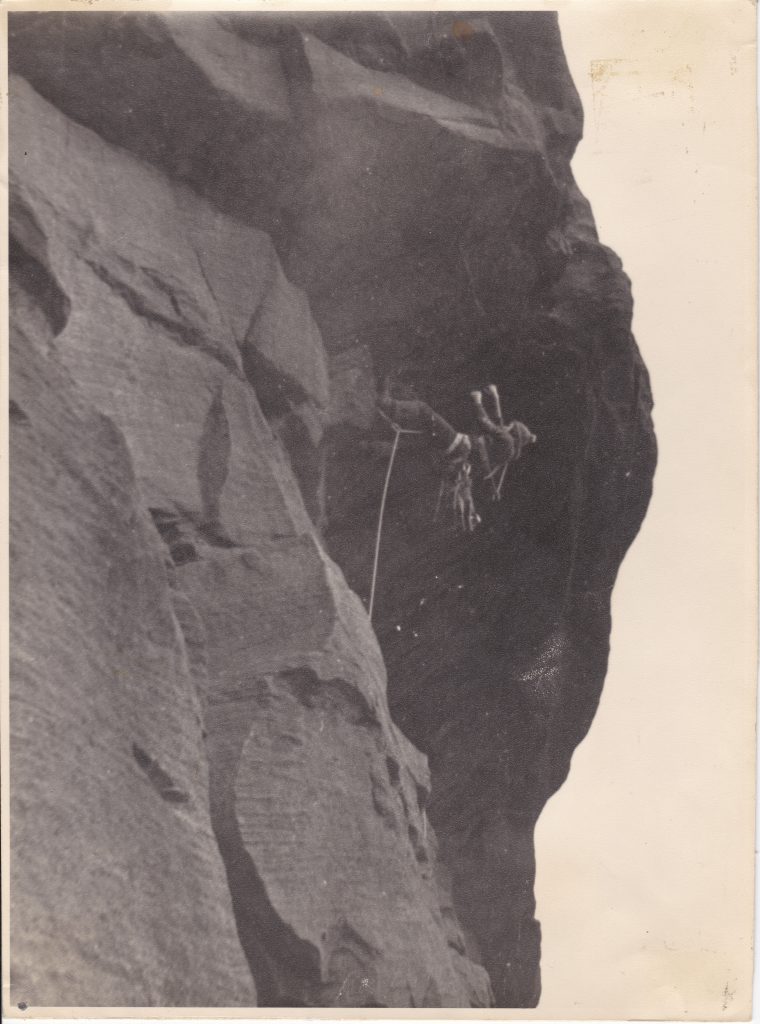 With Ron’s grounding I turned up at Bristol University as a gritstone thug to find a very different style of climbing – no cracks!  The others in the club were typically tall careful climbers, they missed many of the moves consequently, as noted in the 1976 University Mountaineering Club Journal (below). 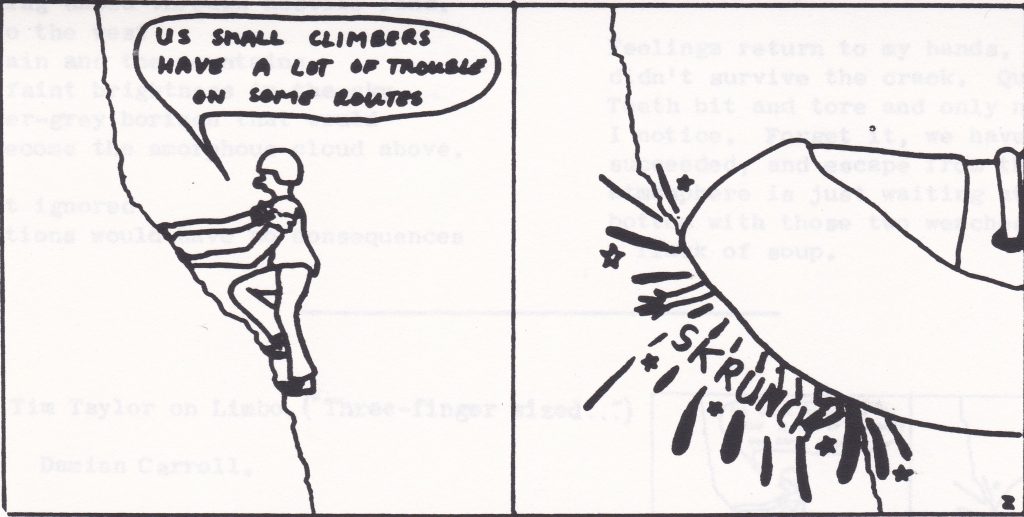 So, Ron was a major influence then and later. When I was back ‘Up North’ we climbed after work on limestone in the Dove and Manifold, HVS classics mostly.  Pure quality of life, especially with a pint afterwards.

Around then he introduced me to the NW Highlands in late winter, staying at Gerry Howkins hostel in Achnashellach.  It was magical, blue sea loch, green shore, brown slopes, snow covered hills and blue sky (sometimes).  I read Hamish Brown’s Mountain Walk, following his route on OS maps; it was way out of my league.

Ron died a dozen or so years later in his early 50s, far too soon. 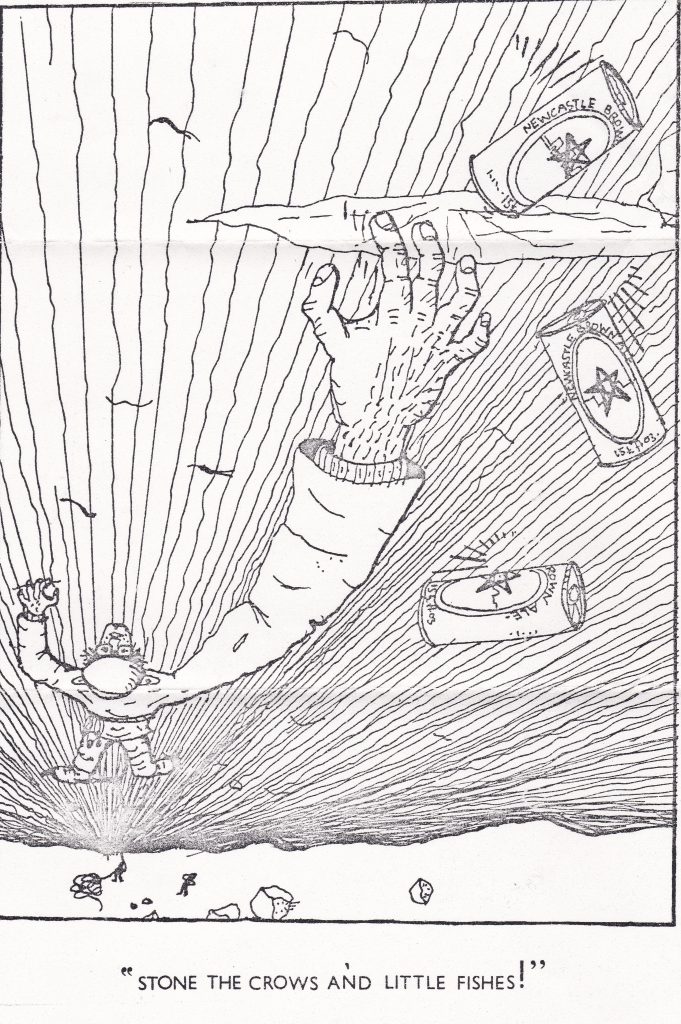 Through my friend Les Watt.  We’d met at work and soon realised we were both climbers and had climbing friends in common.  More evening cragging, which became harder to manage; we knew it at the time and appreciated it all the more.

Les and our pal Oliver had embarked on competitive Munro rounds.  There was no way I was going to be a ‘puerile ticker’, but a big trip was not to be missed, the longer ones became known as the Midsummer Madness.  Eventually they both completed leaving me halfway round (an informal list of course), however, the incubation of munrosis vulgaris was complete and I didn’t want to stop going to the Scottish hills.  By now Les had stopped work and had joined the Club.  He supported me on my second half of the Munro’s, staying at Craigallan, often on an Easter meet.  It was a small step to join and compleat.  I didn’t really want it to end, and the days beyond 200 were savoured, being able to look at the view and pick out hills already visited.  Compleation was on Meall Bhuidhe in mid-March, a return to the NW where it all started, a day plucked by chance in the eye of an anticyclone – sunshine for us and the opposite for those beyond, you have to take the chance. 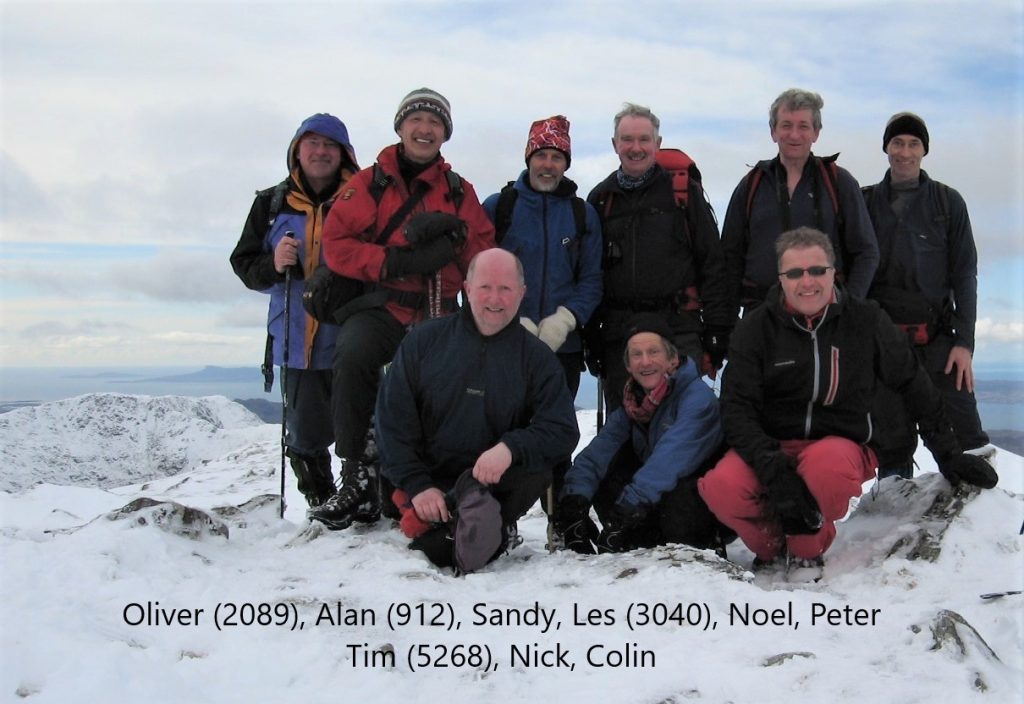 Tim and friends on his final Munro (Meall Bhuidhe)

I guess one that takes the whole day, and one particular 24 hour period stands out, a Cuillin traverse with my pal Peter.  We’d shared a tent on a trek in the Rolwaling Himalaya and got on.  Only one question to agree on – to wash in the morning or have longer in the pit, that and no secret eating.  We’d been on much of the ridge previously, but did have some unknown sections in common, and set off with a good forecast in the afternoon reaching Sgurr Mhic Coinnich by dusk; we’d seen a party a head in the distant that evening, after that we had the ridge to ourselves, didn’t see anyone, never mind pass them.  A timeless day followed, slowly the sky built into the dull battleship grey of impending weather and the sea horizon merged with the sky.  We reached the Slig well in time for a meal and left at closing to bivi under the bridge on the Glen Brittle road out of the rain, tomorrow could take care of itself.  Then a late car turned up the road, we stuck a thumb out, it stopped, and in 20 minutes we were back in the tent with a nippy sweetie to celebrate.  Perfection. 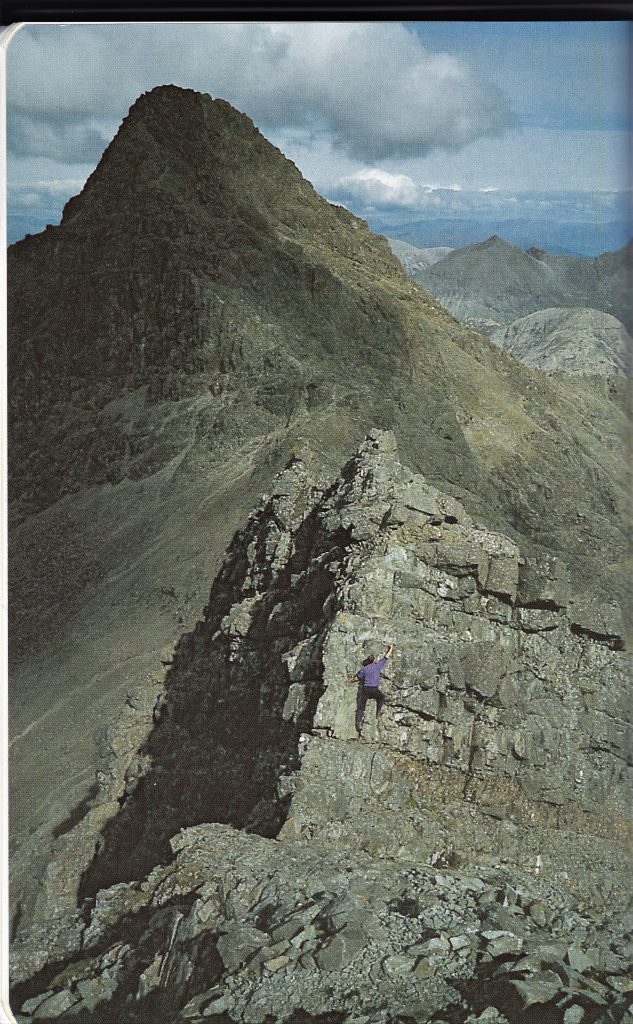 Peter on Am Bhaister, Cullin Ridge, 1997 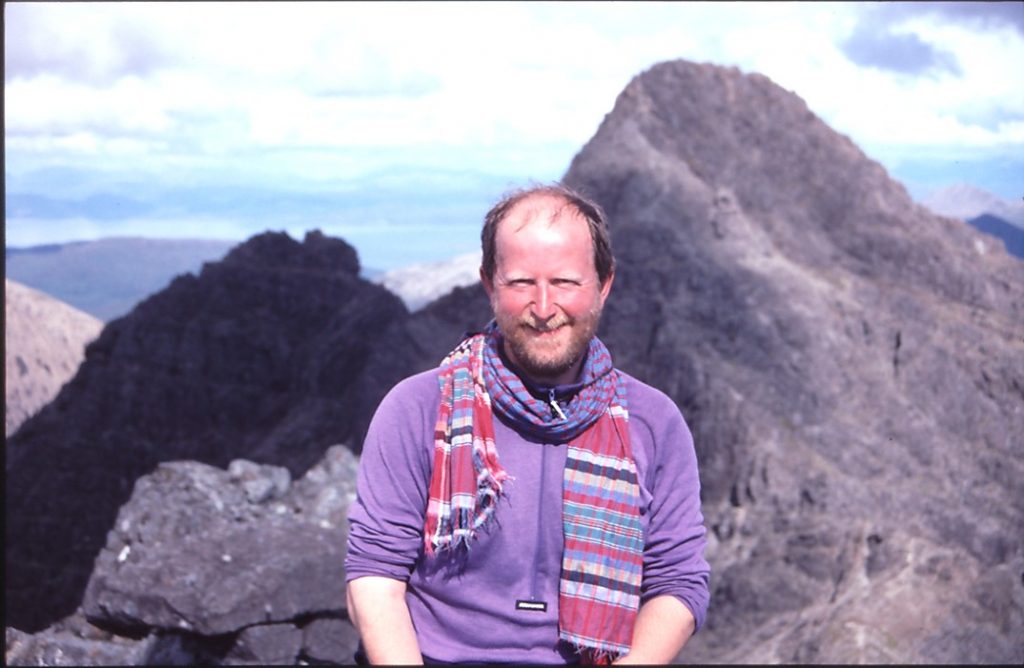 I’ve sort of covered the answer to that question replying to all the others; but if you’ll bear with me here are a couple more:

Trekking in the Karakoram in ’88 amidst personal upheavals (the mountains are always there for you).  If you ever want to see how insignificant humans are / how great natural forces are go and drive up the KKH to get there.  I went with KE on their first commercial trip to Snow Lake, traversing the Biafo and Hispar glaciers, following in (some of) Eric Shipton’s footsteps – I’d read Blank on the Map earlier.  OK, it’s a walk, but what a walk.

You’d think you’d had the trip of a lifetime, but that doesn’t reckon with the rat, who’s soon hungry.  I managed to satisfy his appetite a few trips later with a crossing taking in the Barun Khola, (the way to Makalu Basecamp), then over a high saddle to the Hongku valley, and out to Khumbu across the Amphu Labtse.  Originally visited by Shipton, Hillary and Lowe in 1952 in the other direction.  Hardest thing I’ll ever do, and the best trip too.

Have you had any mishaps in the ‘hills’?

Sadly yes.  The summer before A levels I was whisked over to Cloggy to hold the rope for a lad repeating his final year. Charles Yates was already an up and coming climber with ambitions, he led hard rock and hard aid.  At Easter we went to Cheddar for Coronation Street and Bird of Paradise (aid then).  After Easter I studied and Charlie climbed, moving through the ranks of local groups like the Altrincham All Stars, and produced a new route on High Tor.  After A levels we went to the Dolomites, to the Tre Cima di Lavaredo.  Descending from our training route (the Preuss Chimney) he abbed off the end of the rope.  Charlie was going to be a leading climber, no doubt.  Taken at 19.  An only child, his father died a few years later.  His mother, from Ireland, one of the strongest people I have known.  I saw her every year or so until she died nine years ago.  Alpinism wasn’t for me.

These next questions run together (and I’ve been going on a bit too).

Rock – an inescapable line of least resistance on a big mountain crag, multi-pitch of course.  Or something on Cornish granite with a swell running.  Or after work on Staffordshire gritstone and a pint. 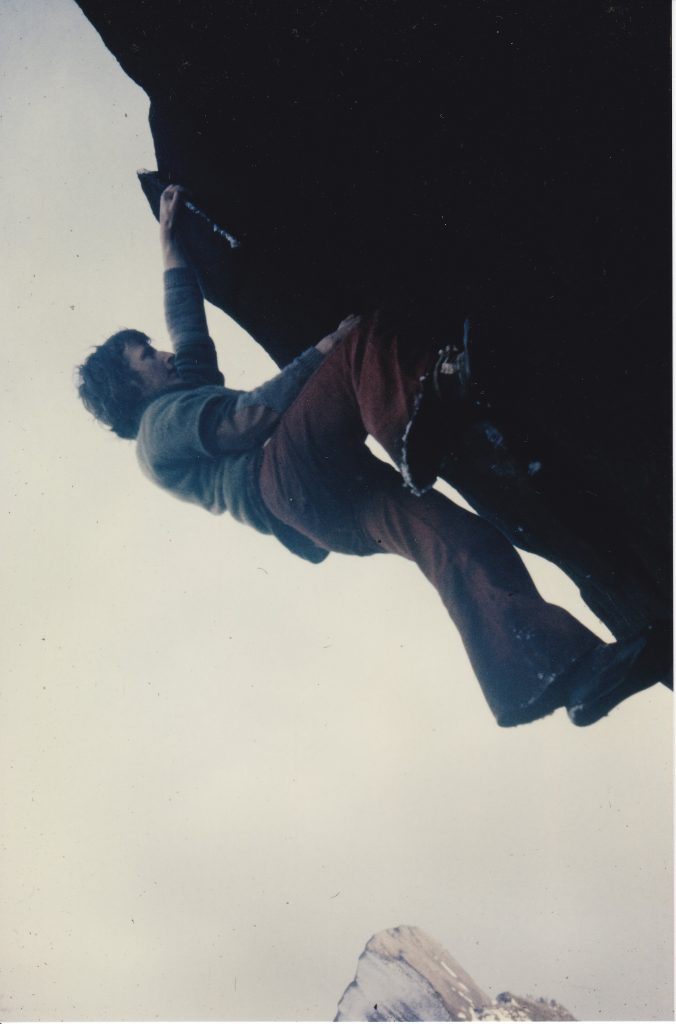 Hills – a high pressure in late spring in Scotland when it seems the sun hardly moves and you walk from one hill to the next before realising it’s reaching the western horizon and it’s time to bivi before continuing the next day.

Bigger hills – trekking in the Himalaya and Karakoram, the morning after a hard frost with clear mountain light before the heat of midday (Tilman wrote about this I think).  And also, the simplicity beyond the first serious col when the life you’ve led falls away and you focus on what’s around you without distracting thoughts; there’s a distillation to essentials like where’s camp, what’s to eat and can we sleep well, there’s not much head space for anything else.

All these objectives are better shared, I’ve found after two days solo Munro bagging that the sheep become quite chatty.

A few.  An ease with each other and a tolerance of suffering, cheerfully.  Alert with an eye for the conditions and navigation – this is always a shared responsibility.  Plus a positive mental attitude.

Rob, a superb climber, very measured, could sleep on a washing line.  After 10 days cragging in the North West Highlands we fell out only on whether Fionn Buttress or Gob was the better route (FB for me).

Les and Oliver, Munro companions mainly, and climbers, who never seem to know when to stop – ‘the weather’s good, it’s still light and that next one isn’t that far away’.

Alan, a man for anything Scottish and the longer trip, we can go for days without any issues.

Sandy, can go for days on nothing, at speed (I can’t keep up with him), just keep him in the right direction.

Noel, indefatigable, knowledgeable, always has a story to raise the spirits. 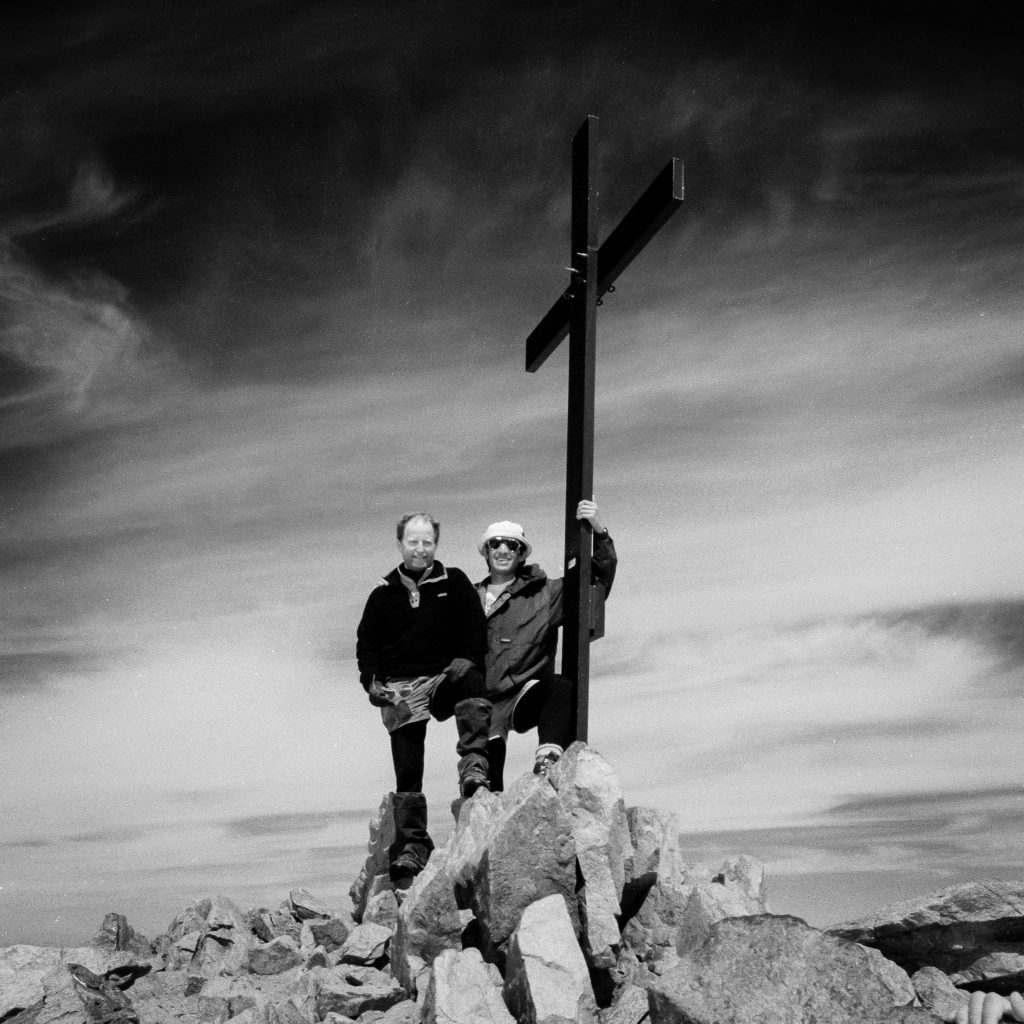 Nowadays walking, occasional Corbetts, forays in the pre-alp and latterly a little light cragging, it’s great to be back out on rock again.

Just to get out is satisfying.  OK, some hut to hutting in the alps, climbs at a reasonable grade and I’ll be a happy bunny.  It would be something to see if any of the three granddaughters can enjoy this sort of thing.  One shows some promise at least.

Well, too much festering when young, an inability to understand how valuable the time will seem later.

More opportunities to get out.  And never mind like-minded people – you’re all ones who UNDERSTAND!

As Colin Kirkus said: “Going to the right place at the right time with the right people is all that really matters.  What one does is purely incidental.”