Our “On the hill with…” a series of short interviews with members of the Rucksack Club continues this week with a Past President Gerry Gee [1990/91], who was in the ‘hot seat’ during one of the landmark periods in the Club’s history. As you will read, he remains active in his late 80’s…an inspiration to us all! 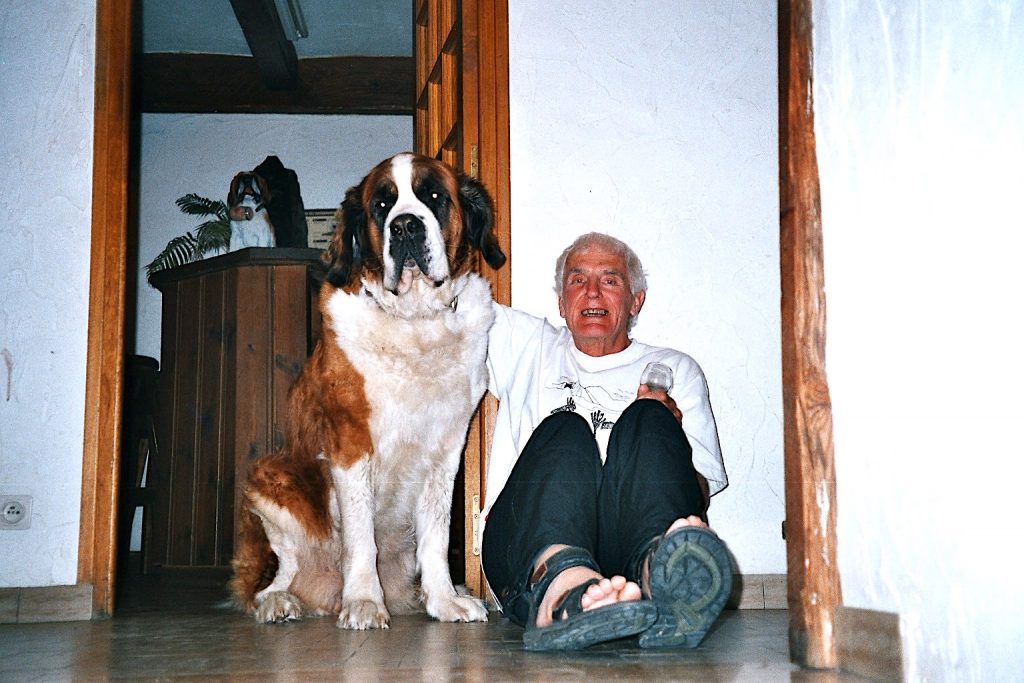 Gerry enjoying a brandy on a Wednesday Walkers Alpine Tour, 2003

How did you get into walking and climbing and who was most influential?

I started hill walking towards the end of my time at my all-boys secondary school. The main motivation was to set up a joint activity with our all-female twin school. Success in this latter endeavour was limited, but we did do some good hill walks in Yorkshire and Derbyshire.

The idea of climbing had never even remotely entered my head, until chance events intervened. Firstly, my oldest friend the late Colin Ludlam, managed to fail his exams at Nottingham University, thanks mainly to his pursuit of the pretty girls that Nottingham was famous for at that time. Hence, he had to fill in for a while with a temporary job at Kelloggs. “Hey”, he announced to me one day, “I’ve met this crazy guy who goes climbing. You’ve got to come along”! The “crazy guy” turned out to be Bev Burrage. I humoured Colin by tagging along with him and Bev to various Derbyshire outcrops. Bev’s enthusiasm for climbing was such that he could have talked a blind mole into trying a few pitches. Suddenly, I realised I was hooked.

One weekend, whilst staying at a B&B in Nant Peris, Colin and I wandered along the road towards Beudy Mawr. We got chatting with Gordon Robson, then a Club member. An hour or so later, Gordon was leading us up Main Wall. This proved to be our most exciting climb to date, not least because I didn’t find the undercut holds on the rising traverse and pinged off temporarily; that a Severe could be so brilliant was a revelation. The idea of having somewhere to stay in North Wales was very tempting, and not long after we both joined the Rucksack Club.

Memorable days with the Club are so many and varied that without them life would have been much emptier. If I pick out a few: 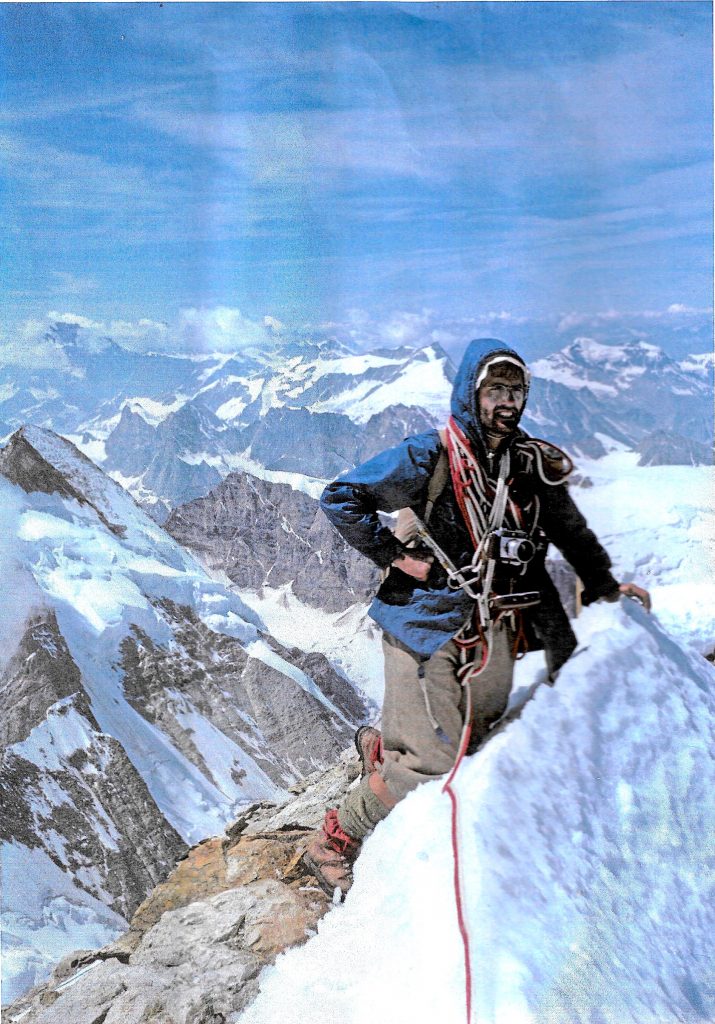 Gerry on the summit of the Matterhorn after ascending the Zmutt Ridge. 1963. Photo: John Allen

Head-banging a stone on the appropriately named Avalanche and similar treatment on the Pelvoux (RCJ 1983) encouraged the use of a helmet. However, perhaps the most serious incident (with comic overtones) was just before the start of a climb on the Pembrokeshire sea cliffs. There was a 20 ft very smooth ledge, sloping slightly downhill and ending at a 6 ft drop down to a sea with an impressive swell on. This was the super summer of 1976, when one’s clothing, and hence body friction, was minimal. I slipped and found I was slowly but inexorably sliding towards the waiting sea. My companions could only watch from their rock stances. My legs went over the edge but then, luckily, my shorts gave enough friction to halt further progress.

Perfection should not be hoped for as, firstly, it would show up one’s own faults in stark relief and, secondly, no totally sane person would ever go mountaineering anyway. In my time, the RC has always had ample supplies of able, enthusiastic, quirky, humorous and eccentric companions to venture fourth with.

Activity in the hills, as I approach 88, is minimal but I love rambling on the Wednesday walks and around on Kinder. My current target is the new Kinder highest point. North Wales has given me many adventures in the past years and I hope to soon repeat my favourite walk from Beudy Mawr to Cwm Glas, North ridge of Grib Goch and along the ridge to Snowdon. 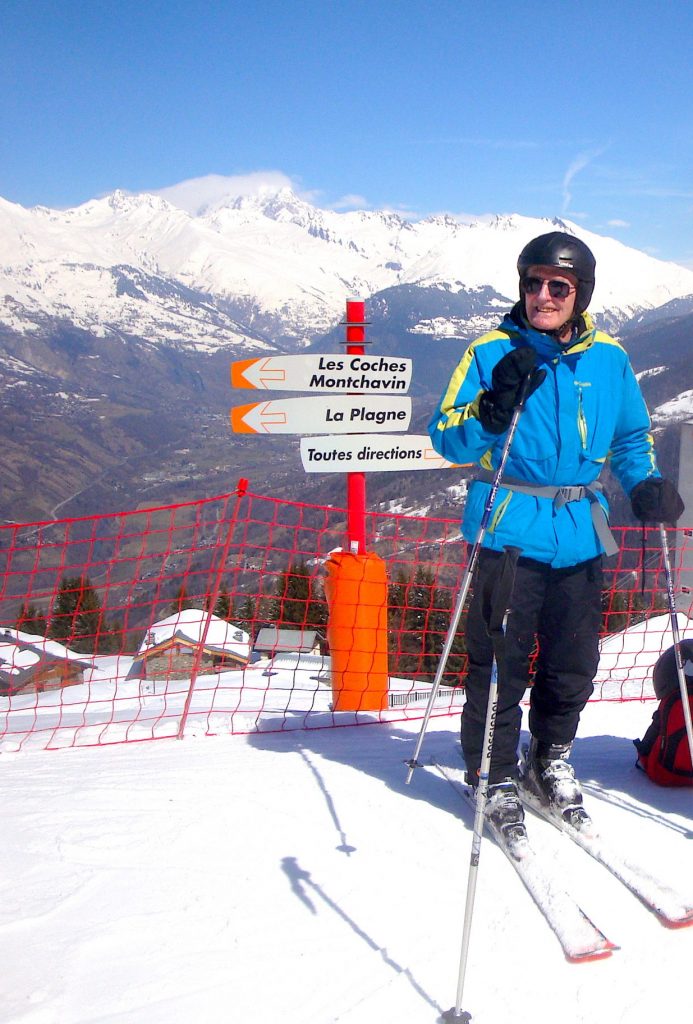 A lifetime of friendships and adventure! 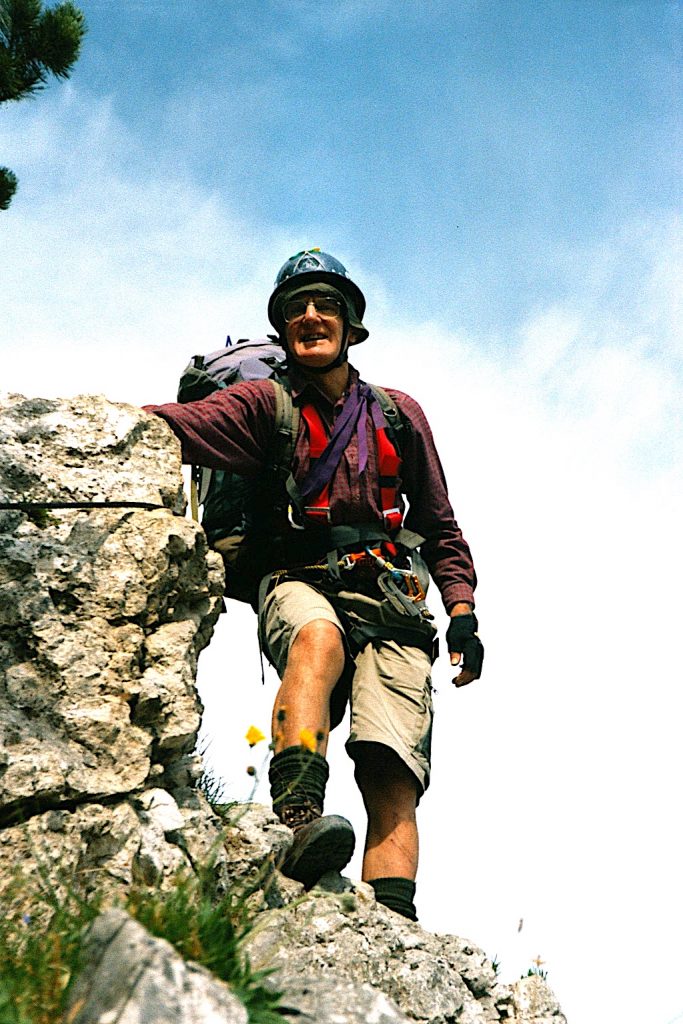 During your time as President, a historic landmark occurred within the Club…what are your memories of this time?

Well, it is a memory of a different kind and concerns the Club’s decision to allow the admission of women in September 1990. In 1973 I led the Barmouth to Aber walk and its completion by myself, and others, was made possible by the efficiency of the support provided by Carole Smithies and yet she was not supposed to even enter Beudy Mawr. Also, during many walks in the 1980’s, I was impressed by the enthusiasm and ability of Sue Wayne, a friend of the Llewellyn’s. I found it inspiring that she loved coming on our walks, despite being barred from joining. Hence, I was very much in favour of change although I knew of, and could understand, the opposition to such a move from some members who were used to, and preferred, the status quo. Nevertheless, when I became President, I found that the entire Committee were strongly in favour of change. All were thinking that it was in the best long-term interests of the Club. Despite the obstacle of needing a two-thirds majority, we decided to go for it. Here I must pay tribute to the enthusiasm and drive of the late Brian Rhodes and also to a stunning speech by John Lewellyn, which won over the waverers. The motion was passed-just! One vote the other way, would have scuppered it. Happily, and deservedly, Carole became our first woman member. Sadly, however, Sue became ill around this time and died when only in her 40’s. I, personally, like to think of the change as a tribute to her memory.