The Classic Article“Trespassers will be prosecuted” was published in the 1922 RCJ. The author, Charles Pickstone, was a solicitor and one of the original members of the Club. He was President 1914-1916 and was also very influential in writing the first “Rules of the Club”. 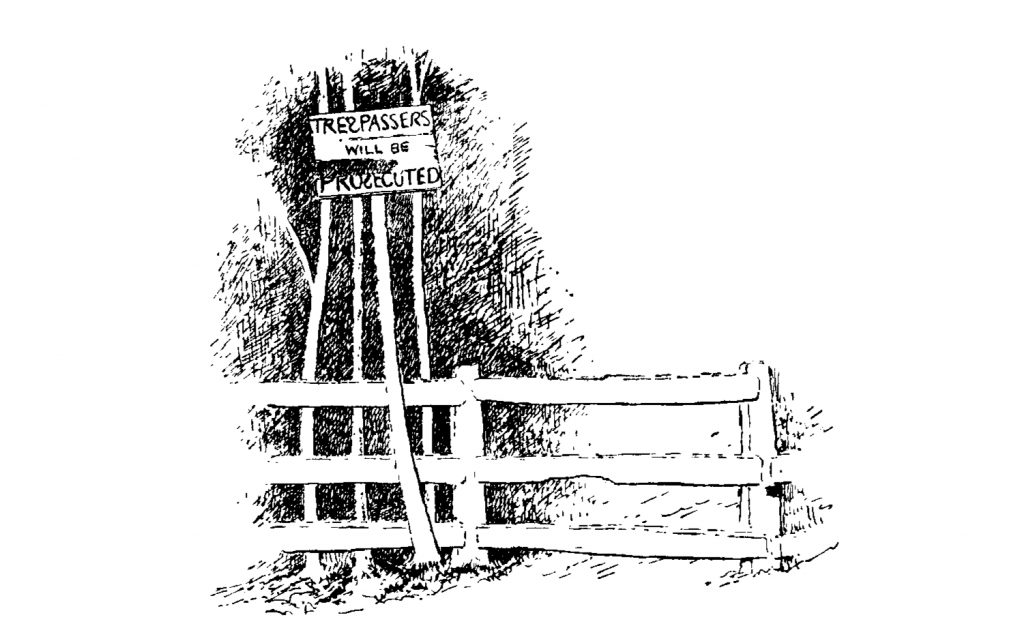 Club member Jean Walker, who is also a solicitor, has kindly provided the following introduction:

Are we any freer to roam today than we were in 1922? Are we still likely to be “prosecuted” if we trespass on private land?

Firstly, nothing has changed so far as notices are concerned. The absence of a notice indicating private land does not mean we have a right to go onto that land. Equally the notice that says “trespassers will be prosecuted” remains misleading. Prosecutions relate to the process of bringing criminal offences before the court. What those posting the notices really mean is that if we trespass they will start civil proceedings for compensation for any damage we do.

Landowners and their gamekeepers can remove us from private land using only reasonable force, if we refuse to leave when requested. They do however risk a prosecution themselves for assault if that force was not reasonable so, as before, are advised to tread carefully.

The civil law has not changed at all, save that the advice by C.H. Pickstone, the author, to pay money into court should be replaced by the advice to consider making a “Part 36” offer. If we trespass we may be asked to pay compensation for any damage we cause.

However the criminal law has changed. The Criminal Justice and Public Order Act 1994 sets out all the offences of trespass. Most relate to travellers or those attending rave events on private land. There are powers to prosecute the organisers, and attendees at a mass trespass, but perhaps the one we need to be mindful of – and the organiser of the high camp especially (!) is the power to prosecute for camping on private land and failing to move when asked to do so.

I’m sure C.H. Pickstone’s message is as valid today as in 1922 – respect the countryside and the rights of owners and farmers and leave no trace of you having been there except a few footprints.