Joe Fisher spotted an article on the Welsh 3s https://www.ukhillwalking.com/articles/destinations/how_to_do_the_welsh_3000s_challenge-12857 and posted the following question on FaceBook:

From reading this article I had no idea that it was a group from the Rucksack Club, lead by Eustace Thomas, who completed the first “Welsh 3000’s” challenge! Is this correct? Does anyone have anymore information on this?

I promised to trawl the relevant Journals for the period and found that Mr Thomas was pretty busy with extraordinary feats of long-distance walking around then, along with others in The Rucksack Club. Here are some extracts from the Climbs and Excursions section of the 1919 and 1920 Journals:

The first recorded 24-hour traverse of the Welsh 3s barely warrants a footnote: 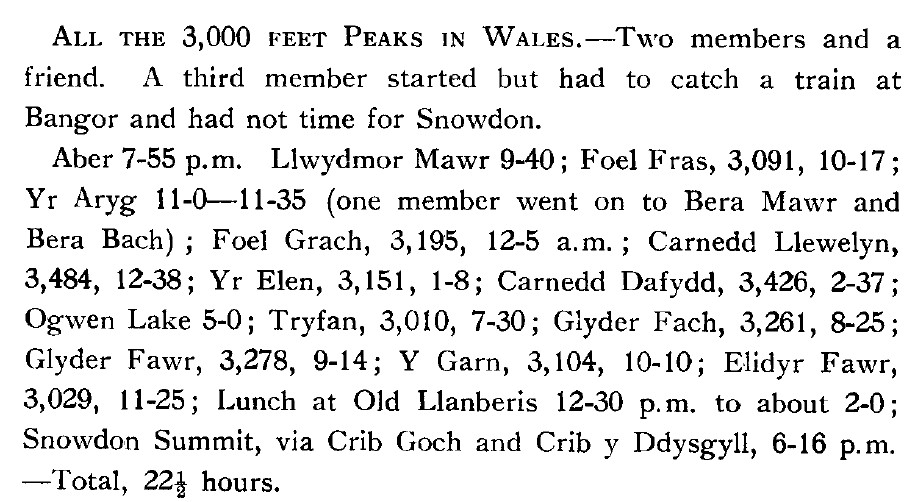 Other ‘excursions’ around that time included (the first?) Derwent Watershed (37.5 miles in 11:39hrs); Colne to Doveholes (51 miles in 17:57hrs ‘including wait for meals at various pubs of about 2 hours!’) and a Lakeland ‘Fell record – peak-bagging course’ of around 60 miles and 23,500 ft in 22:07hrs which doesn’t sound a lot less ground that the BGR, not to mention ‘a Proper Night Walk’ which involved the traverse of the Lakes 3s (Skiddaw, Helvellyn and Scafell Pike) in one December night (between sunset and sunrise).

The same two Journals yield first-ascent accounts on Cloggy and Scafell Crag, peak-bagging in Vancouver, and reports of early van-dwelling exploits. More sobering, the Journal also features a Roll of Honour of the 43 members who ‘were accepted for active service in His Majesty’s Forces during the War, including seven who were killed in action. Perhaps it is little surprise that 24 hour bog-trotting marathons held no fear for this generation.

Submitted with the expectation of corrections from our far more knowledgeable Hon. Archivists!