Just a heads up for all would be Rucksack cavers.Because of the success of the 2019 Berger Expedition, some of the original team are looking at another mammoth trip next summer “UP or should it be DOWN” the classic world caving trips.The PSM as its known lies close to the French/Spanish Pyrenees town of Bayonne on the western coast of France.

Heralded as The deepest world cave for many years until the Berger was bottomed in the late 1950’s it attracts teams from all over the globe because of its ease of access and the mammoth SALLE VERNA cavern bigger than Wembley stadium.A man made tunnel takes tourists into Salle Verna but for the proper cavers unlike the Berger there a different entrances and through trips to accommodate all levels of experience.Obviously its early days and plenty of planning to do,but it would be great to have strong Rucksack club presence this time along with the other clubs involved.John Warby. 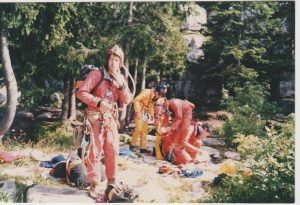